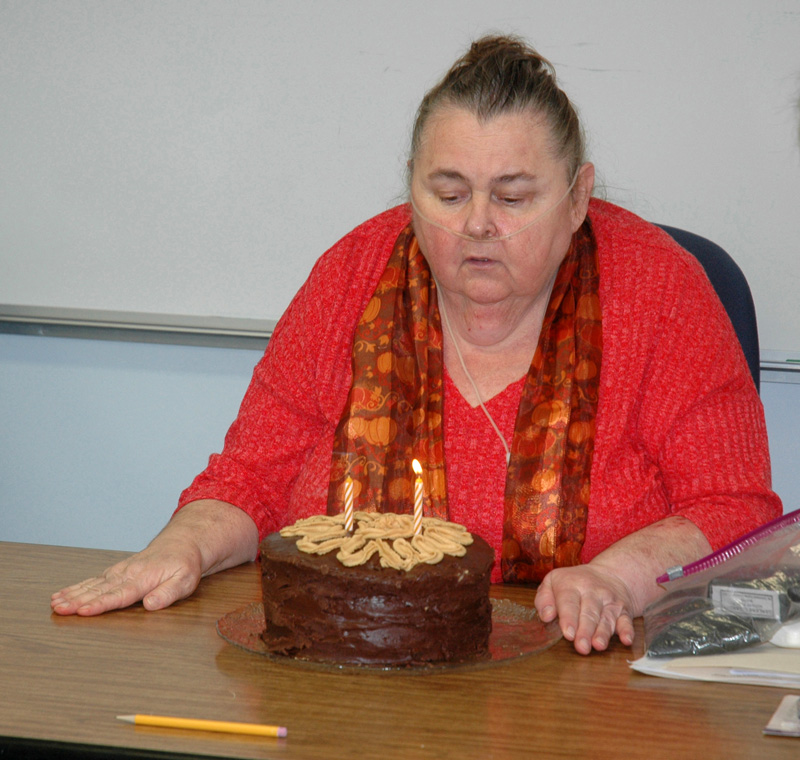 Somerville Third Selectman Darlene Landry blows out the candles on her birthday cake at the end of a selectmen’s meeting Nov. 1, 2017. Landry resigned from the board effective April 1. (Alexander Violo photo, LCN file)

Darlene Landry, chair of the Somerville Board of Selectmen, has resigned from the board effective Monday, April 1.

First Selectman Chris Johnson read Landry’s letter of resignation into the record during a selectmen’s meeting April 3. Landry was the third selectman, but had been elected chair by her fellow selectmen.

“It has been an honor and pleasure to serve the town and the board in this office,” Landry said in the letter.

Without going into detail, Johnson attributed the resignation to a family matter. “I applaud her for putting family first and wish her and her family the best,” he said.

Johnson said he would prefer to fill the vacancy on the board in the June election.

“I want to reschedule the nomination part of the process in order to fall within the constraints of town meeting and hold the election concurrent with the one coming up,” Johnson said.

Johnson said he wants to give residents enough time to take out nomination papers and gather signatures.

The board voted 2-0 to make nomination papers for the position of third selectman available April 3 and due back to the town office by Wednesday, April 24.

Chase moved to have Johnson take over as the board’s chair. The motion passed, 2-0.

Landry was elected to the board of selectmen in 2014 and reelected in 2017. She also served several terms on the town’s school board, including nine years as chair.

Landry did not respond to a request for comment.

The selectmen addressed a long-standing question about whether Somerville is a dry town by accessing records from the 1970s.

Referencing a special town meeting from November 1978,  Johnson said the town voted 45-40 to allow alcohol sales, but voted 46-40 to prohibit sales on Sundays.

Johnson said the warrant article permitted the sale, but no consumption on premises, of alcoholic beverages. The vote still stands, according to Johnson, because it took place after Somerville reincorporated as a town in 1974.

The discussion of whether Somerville is a dry town came up during the board’s March meeting in relation to the marijuana committee, as residents discussed whether the town’s stance on alcohol sales should apply to recreational marijuana.

Town Clerk Erin Pellerin said the U.S. Census Bureau is looking for people to assist with census work in Somerville.

According to Pellerin, the positions are for three months and will begin with matching houses to addresses in May or June.

Pellerin said more information on the positions will be posted outside the town office.