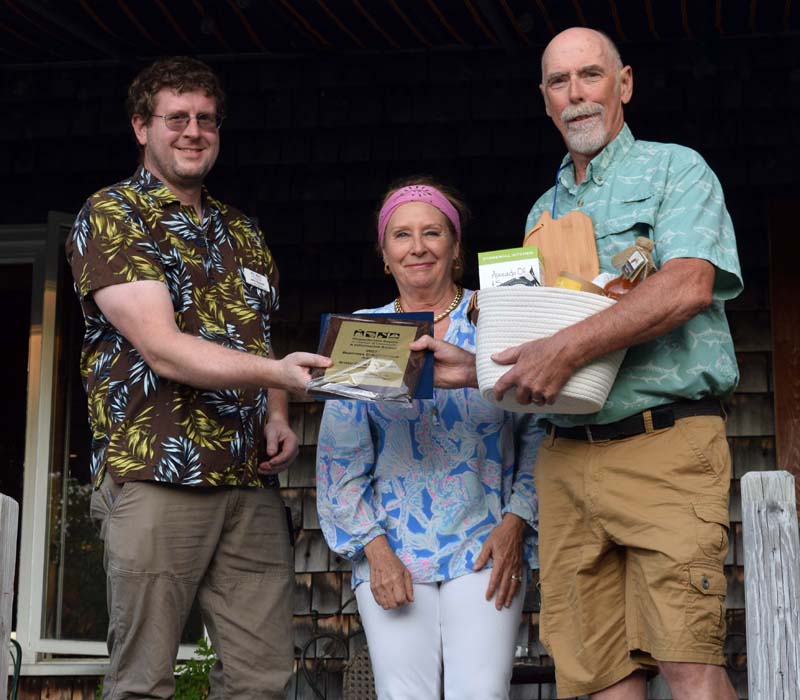 Clyde Pendleton, chair of the Bristol Parks and Recreation Commission, accepts the Business Enhancement Award on behalf of the parks department for its work constructing the Pemaquid Beach pavilion during the Damariscotta Region Chamber of Commerce and Information Bureau’s annual meeting and awards ceremony at The Bradley Inn in New Harbor on Wednesday, Sept. 14. From left: John Roberts, outgoing president of the chamber’s board of directors; Executive Director Lisa Hagen; and Pendleton. (Evan Houk photo)

Construction is expected to start soon to renovate and expand the building located on Main Street near the intersection with Bristol Road, and will be completed sometime next year, John Roberts, outgoing president of the chamber’s board of directors, said during the organization’s annual meeting and awards ceremony at The Bradley Inn in New Harbor on Wednesday, Sept. 14.

“It’s so exciting to be on the verge of having the chamber have its first home in its existence,” Roberts said.

The plan is to update and expand the 17-by-17-foot 1935 building into the chamber’s first permanent headquarters and a job resource center for the community. The chamber still needs to raise $68,000 of its $400,000 goal for the project.

More than 100 people attended the Caribbean-themed event and munched on oysters from Pemaquid Oyster Company and cuisine from The Bradley Inn as Nat Hussey entertained with island music and classic Jimmy Buffett tunes.

Roberts spoke to the accomplishments of Executive Director Lisa Hagen, unfurling a long scroll of white paper to a burst of laughter from the crowd.

“Her efforts have helped shape our Chamber into a vibrant and welcoming organization with a strong financial position on a path to a bright future,” Roberts said.

He then presented the President’s Award to Rick and Lisa Hagen.

Lincoln County Television showed prerecorded interviews with each of the award recipients.

“I chose community service because when I was raising my children, I taught them how important it was to be involved with your community and volunteer,” Hagar said in the prerecorded interview. “My feeling was that if I was going to teach my family to do that, then I needed to step up.”

Hagar has served as fish agent for Newcastle and Nobleboro, on the Great Salt Bay Sanitary District Board of Trustees, the Damariscotta Select Board, the town’s comprehensive plan committee in 1992, the charter commission in 1994, and the Great Salt Bay Consolidated School District’s building committee.

The Central Lincoln County YMCA received the Organization Community Service Award. CEO Casey Clark Kelley accepted on behalf of the Damariscotta-based organization. During a recorded interview with Hagen, Clark Kelley mentioned the community navigator and FARMS at the Y programs and partnerships with LincolnHealth and local food banks as examples of efforts by the YMCA that strengthen the community.

Clyde Pendleton, chair for the Bristol Parks and Recreation Commission, accepted the Business Enhancement Award on behalf of the highly active parks department for its work in constructing the $900,000 Pemaquid Beach Pavilion and boardwalk completed in 2020.

Dustin “Dusty” Hancock, owner of Damariscotta’s Strong-Hancock Funeral Home, accepted the Business Person of the Year Award. He said during a prerecorded interview with Roberts, that he has helped more than a thousand families over the years and gotten to know the individuals in the community.

“I grew up here, I knew the characters. I knew Bob always shook your hand a little too hard or Phyllis always had Jolly Ranchers in her pocket,” Hancock said. “It’s those personal connections that make connecting with families easier and deeper.”

Larry Sidelinger, of LCTV, was installed as president, Jane Oliver-Gravel, of the Rotary Club of Damariscotta-Newcastle as vice president, Terri Herald, of Coastal Car Wash and Detail Center, as secretary, and Wayne Farrin, of Farrin Properties, as treasurer.

At the end of the evening, Hagen honored Roberts as the meeting was his last as chamber president and on the board, as he served the maximum of two three-year terms.

“We are where we are because of John,” Hagen said of Roberts’ work to make the Damariscotta Region Information Bureau headquarters renovation a reality.