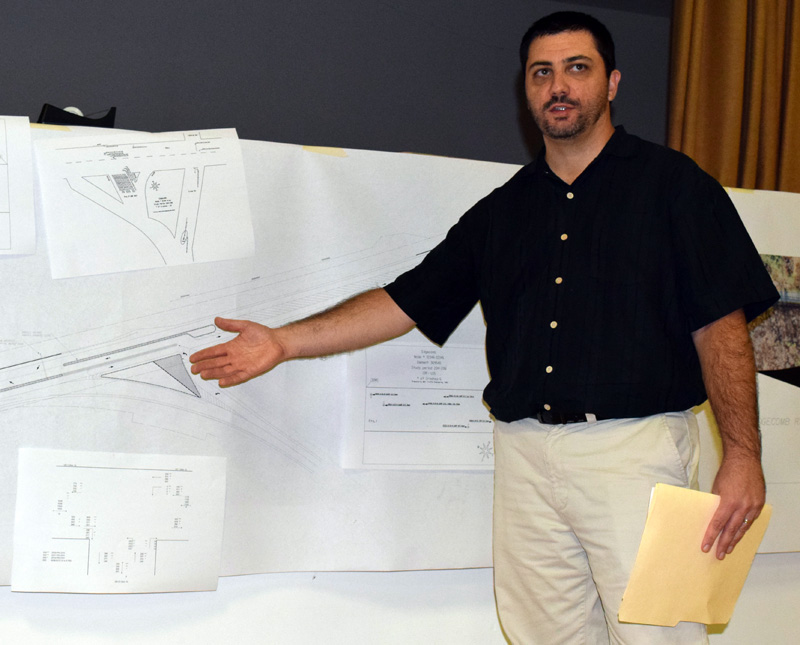 Matt Philbrick gestures to a diagram as he explains the Maine Department of Transportation’s plan for improvements to the intersection of Route 1 and Route 27 in Edgecomb during a public hearing at the Edgecomb town hall Tuesday, Oct. 10. (J.W. Oliver photo)

Residents of Englebrekt Road in Edgecomb have concerns about a state plan to modify the nearby intersection of Route 1 and Route 27, but the project engineer says a small tweak can resolve the issue.

The Maine Department of Transportation held a public hearing about its plan for the intersection at the Edgecomb town hall Tuesday, Oct. 10.

The DOT plans to create a “protected left” or “protected pocket” intersection. DOT officials called it a “Florida T” intersection at a meeting with the Edgecomb Board of Selectmen on June 5, but the department has since altered the plan and the terminology.

The “protected left” intersection will provide exactly what it promises: protection from southbound traffic for motorists entering Route 1 from Route 27.

The project will add a second southbound lane and a median will separate the lanes. As motorists pull out onto Route 1, they will only need to check to their left, for northbound traffic.

“You don’t have to worry about anyone coming from the right yet,” said Matt Philbrick, the DOT engineer behind the redesign.

The DOT hopes the “protected left” and other changes will lower the frequency of accidents at the intersection.

Maine has a couple of other “protected left” intersections and they work well, according to Philbrick.

The project also includes changes to the intersection of Cross Road and Route 1, including the addition of a flashing yellow beacon and signage.

The changes will eliminate the ability for southbound traffic to turn left from Route 1 onto Route 27, but most motorists make the turn at Cross Road anyway.

Twenty-two people were present for the hearing: the three-member Edgecomb Board of Selectmen and its recording secretary, three DOT employees and a stenographer, two reporters, Lincoln County Planner Bob Faunce, Lincoln County Sheriff’s Office Sgt. Matt Day, and about 10 others.

Among the residents were several from Englebrekt Road, a largely residential road just south of the intersection of Route 1 and Route 27.

The changes to the intersection will mean motorists entering Route 1 from Englebrekt Road to go north will need to cross two lanes of southbound traffic. The busy road already presents a challenge and residents fear the changes will make it worse.

“We’ll take a look at that,” DOT Senior Project Manager Ernie Martin said. “This is just a preliminary public meeting. We’ll be back to see if there are things we can do, checks and balances, to make this more effective.”

Philbrick, in a conversation with residents after the hearing, said the department could look at a “left-turn pocket” by Englebrekt Road to alleviate their concerns.

Faunce, the county planner, said there have been discussions about reopening a former information center just south of the intersection, which could complicate the plan.

Martin asked Faunce to inform the DOT as soon as possible of any developments with the property.

“If something is going to go in in the future, we’ll have to figure out a curb-cut location for that,” Martin said.

Hugger, the proprietor of the Cod Cove Inn, which overlooks the intersection, asked if the department has any plans to take property from abutters.

“We haven’t determined that yet,” Martin said, but he described it as unlikely.

Potter expressed concern about how emergency vehicles would be able to exit Route 27 and travel south during stop-and-go traffic if the median prevents vehicles from pulling to the right.

Martin said the median will be “mountable, so cars can move out of your way.”

At the June meeting, department officials said construction is planned for 2019.

Hugger and Selectman Mike Smith spoke positively of the hearing during the Edgecomb Board of Selectmen’s meeting, which started prior to the hearing and resumed afterward.

“A fatality is waiting to happen there,” Hugger said. “What they’ve proposed is certainly a step forward.”