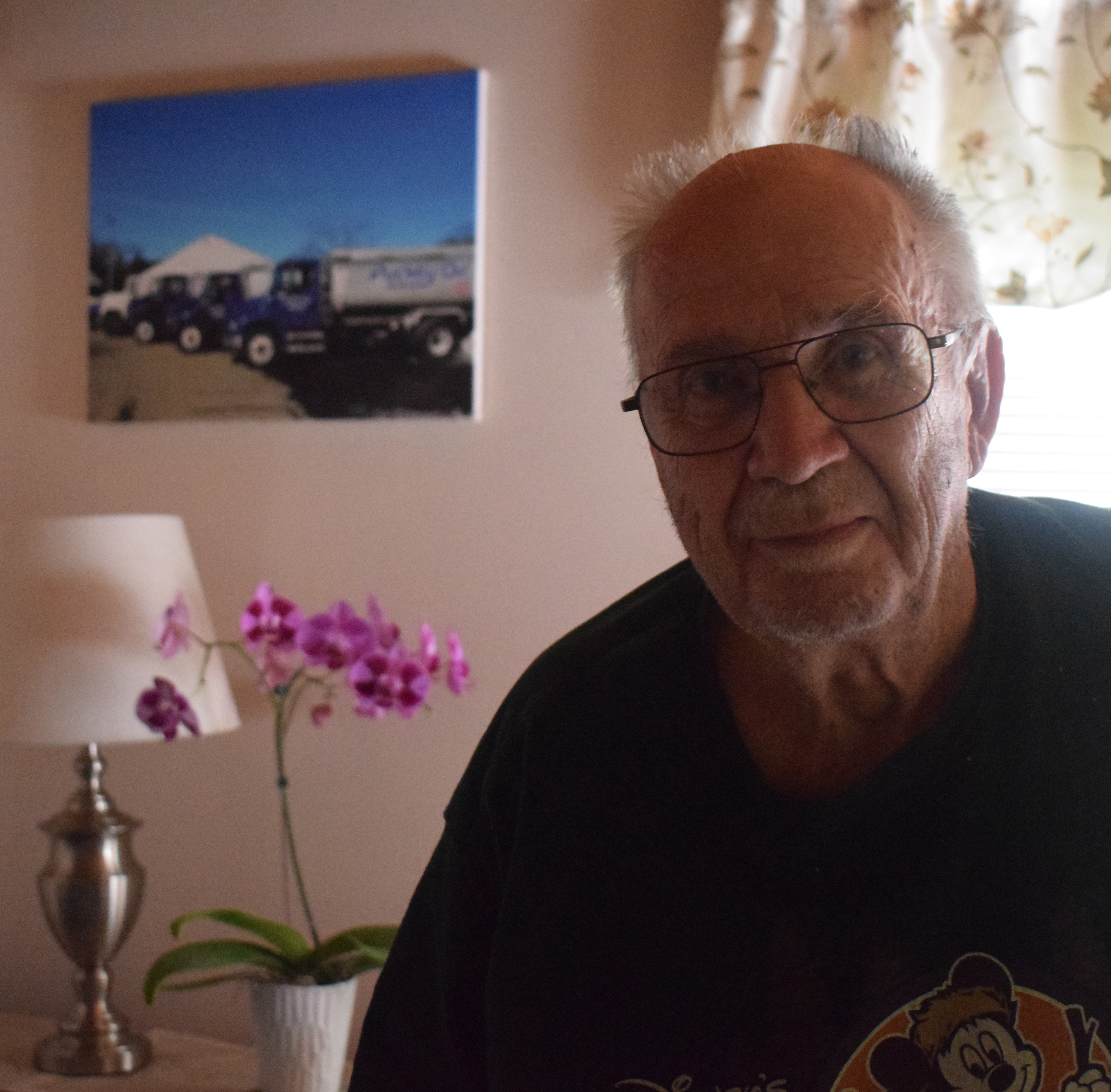 Jack Puckey stands in front of a picture of some Puckey Oil trucks in his Newcastle home on Monday, Aug. 24. Puckey worked for his father’s energy company for 53 years delivering fuel to stations and individuals across Lincoln County. (Evan Houk photo)

Jack Puckey, the longest-serving member on the Newcastle Fire Company, never wanted to be chief of the department. He “just wanted to be a driver,” he said, during an interview at his home on Monday, Aug. 23.

Puckey also spent his entire career driving heating oil and gasoline trucks for his father’s company, John A. Puckey Oil Co., and spent summers working as a brakeman and engineer on trains.

Although Puckey is the person who originally recruited Newcastle’s first full-time fire chief, Clayton Huntley, to the department, he said he always enjoyed driving the trucks, operating hoses, directing traffic, or doing anything else that needed to be done at an emergency scene-. That is, except to be in charge.

Puckey said that after 63 years at the fire department, he still likes to stay involved by attending all the regular meetings. He never became tired of hearing those shrill pages in the middle of the night, arousing him to a fire.

While talking about his time at the fire department, Puckey demonstrated his trained ear when a fire page came through on the radio at his home. After a few of the initial tones went off, he said, “That sounds like Wiscasset.”

Sure enough, it was a call for Wiscasset.

He said sometimes he can tell the difference between tones for different towns in Lincoln County.

Puckey was honored for his longtime service to the Newcastle Fire Company at its annual picnic on Sunday, Aug. 15. Interim Fire Chief Casey Stevens dedicated Newcastle’s Engine 6 to Puckey and presented him with a service award and an embroidered fire company jacket.

Puckey said the recognition was a complete surprise to him and he thoroughly enjoyed the picnic on the Damariscotta Lake.

Puckey’s father served with the fire department and young Jack grew up hanging around the fire station, from when he was eight-years-old, helping the station’s live-in caretaker, Harry Vinal, perform basic maintenance tasks around the building.

The most memorable fire Puckey could recalled was when a large wooden building housing rolls of rubber on Academy Hill Road near the train tracks burnt “right to the ground” about 25 or 30 years ago.

“That was a big one,” Puckey said. “We had quite a few departments up there, just trying to soak it down.”

Puckey was born and raised in Newcastle and went to school at the old schoolhouse on Mills Road, where there are now apartments. He met his wife, Priscilla, there and the couple has been married for 51 years.

Puckey graduated from Cardigan Mountain School in New Hampshire because he needed help academically. The school’s website says that it “offers a close-knit community that prepares middle school boys—in mind, body, and spirit—for responsible and meaningful lives in a global society.”

He returned to Newcastle and started work for his father’s company, John A. Puckey Oil Co., at 21-years-old.

“I didn’t want to go anywhere else, I guess,” Puckey said, of staying close to home in Newcastle.

Puckey delivered gasoline to stations such as Gulf Oil and heating oil to homes across Lincoln County for 53 years. Right around the time he retired in 2013, Dead River Co. purchased Puckey Oil. 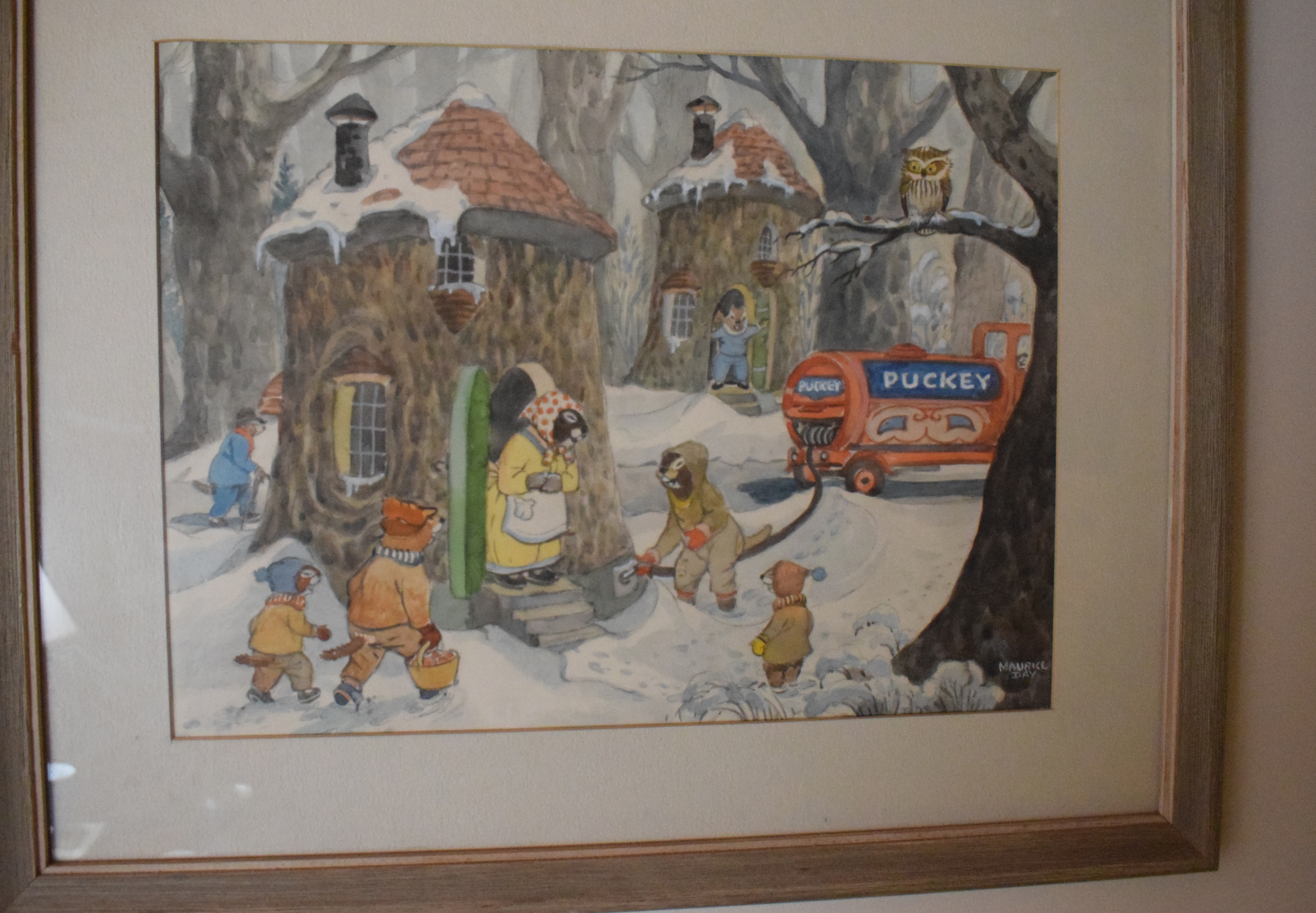 He said he also enjoyed the cookies and cakes he would get from residents, especially around Christmas time.

But things have changed in recent years.

“Back then, everybody knew everybody. Now, we don’t even know my next door neighbors,” Puckey said.

He enjoyed all of his time delivering fuel, except for one unfortunate occurrence that happened in New Harbor after rain froze over a few feet of snow.

“So I pulled my hose out back, all of a sudden the ice gave way and I fell into a septic tank, right up to my waist,” Puckey said.

He was able to pull himself out by the hose, but “boy, did I stink,” he said.

During his time at Puckey Oil, he was able to fulfill another lifelong passion by working summer weekends on the Maine Coast trains traveling through Newcastle from Rockland to Brunswick.

On the passenger train, Puckey worked as a brakeman unhooking cars, hooking them back up, and throwing track switches. On the freight train, he sometimes served as an engineer driving the train even though he didn’t have the proper certification to do so. He said driving the train was much easier than he anticipated.

Puckey said he has loved trains since he was young and watched steam engines unload freight at the station in Newcastle.

“I loved it. I hated to get done,” Puckey said of his time working on the railroad.

Puckey has also hunted throughout the years, even snagging a moose in Millinocket in 1989 and divvying up the meat with his hunting partner.

“I ate it,” Puckey said, when asked what he did with the moose.

He also used to travel to Florida to visit friends and family up until last year, when the COVID-19 pandemic forced him and his wife to cancel their plans.

“I like the warmth and the heat,” Puckey said of Florida.