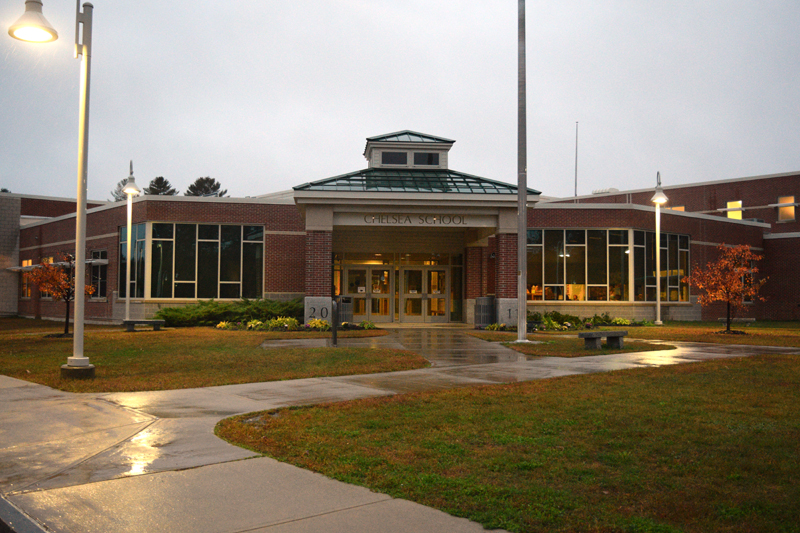 Chelsea Elementary School. Chelsea voters will decide whether to begin the process to withdraw the town from RSU 12 on Election Day, Nov. 6. (Jessica Clifford photo)

Chelsea will consider whether to take an early step toward withdrawal from Regional School Unit 12 on Election Day, Nov. 6.

If Chelsea voters approve the measure and the town proceeds to an eventual vote on withdrawal, it would become the fifth town in the district to consider withdrawal. Palermo, Westport Island, and Windsor considered withdrawal in 2014, and Wiscasset withdrew in 2013.

The RSU 12 Board of Directors discussed the financial impact of Chelsea’s potential withdrawal and approved a resolution in support of continuing the seven-town district Thursday, Oct. 11.

Board Vice Chair Richard Cote, who represents Chelsea, said he began hearing complaints about the town’s tax hike due to the RSU 12 bill around August and September.

The school district’s total budget increased by 3.54 percent for the 2018-2019 school year. Chelsea’s share was $2,340,400.77, the second-highest local contribution after Windsor’s. Chelsea is the biggest town in the district by population.

A four-member committee started a petition to force the vote, Cote said.

“It is very difficult to predict how this will impact the other towns monetarily,” RSU 12 Superintendent Howie Tuttle said.

Chelsea’s withdrawal would not affect any of the programs RSU 12 currently offers to the other schools in the district, but would “make it impossible for Chelsea to participate” in those programs, Tuttle said.

The board reviewed a resolution it had passed when other towns considered withdrawal. After making edits, the board unanimously approved the resolution.

In addition to support for the district as it currently stands, it states that any student from Chelsea who is not attending Chelsea Elementary School would have to return to the school if the town withdraws.

Since Wiscasset withdrew in 2013, its education expenses have grown, Tuttle said, even as the town closed one of its schools.

The total estimated cost for Chelsea to withdraw from RSU 12 would be close to $2 million.

Much of this would come from paying debts to the district. Chelsea would have to pay back the six other towns for their help to pay for Chelsea Elementary School’s gym, employee summer salaries for 2018, legal fees for the withdrawal, and more.

Chelsea will have a public hearing to discuss the possible withdrawal at the school at 6:30 p.m., Thursday, Oct. 25.

The referendum question reads as follows: “Do you favor filing a petition for withdrawal with the board of directors of Sheepscot Valley Regional School Unit #12 and with the Commissioner of Education, authorizing the withdrawal committee to expend $15,000 from Undesignated Fund Balance and authorizing the Board of Selectmen to issue notes in the name of the Town of Chelsea or otherwise pledge the credit of the Town of Chelsea in an amount not to exceed $15,000 for this purpose?”

State law outlines the process for a town to withdraw from a regional school unit, including this initial vote.

Megan Soule was hired to be a student support specialist at Whitefield Elementary School.

Soule has 17 years of experience, Tuttle said. She previously worked as a special education teacher in RSU 2 and has an extensive background in student behavior.

Deb Taylor, RSU 12 director of curriculum and technology, updated the board on two RSU 12 literacy team projects that have been worked on since the team organized in the spring of 2017.

The literacy team is creating giveaways for children who move into one of the seven RSU 12 towns. Children will receive a bag with two age-appropriate books, Taylor said.

A new initiative has been to create little libraries for each RSU 12 town. The little libraries are cabinets to store donated books for beginning readers up to adults. People can borrow a book from the library and return it later.

The libraries have not been installed yet, Taylor said. Most of the towns are still deciding where to install them.

(Correction: An earlier version of this article online and on page 9 of the Oct. 18 print edition incorrectly reported that Chelsea was going to vote on withdrawal Nov. 6. The vote is to begin the withdrawal process. The Lincoln County News regrets the error.)