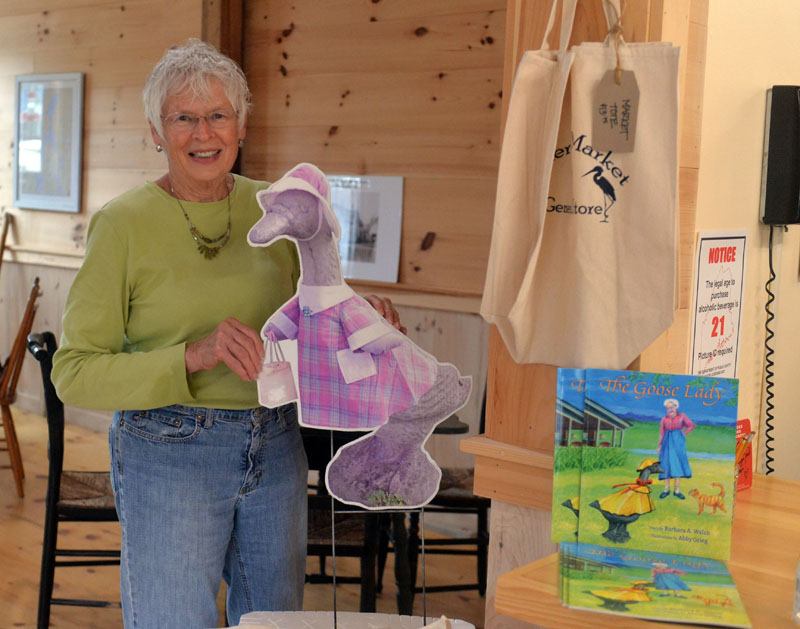 Jefferson summer resident Sally Kinkade holds up a picture of the concrete goose that belong to her mother Marjorie Bean Scott. Scott and the goose are the subject of a new children’s book “The Goose Lady,” by Barbara A. Walsh. (Paula Roberts photo)

The goose on Eastern Avenue in Augusta was a famous landmark to many Lincoln County residents who traveled up Route 17 on their way to Augusta. Now, the story of the goose and the woman who owned it has been immortalized in a new children’s book by a Pulitzer Prize-winning journalist.

Maine author Barbara A. Walsh wrote about Marjorie Bean Scott and her famous goose in her new book, “The Goose Lady.” Signed copies of the book are available at the Jefferson Market & General Store.

Scott received the goose in 1994 as a gift from her daughters Sally Kinkade, a summer resident of Jefferson, and Linda McMullen, of Oakland, after their father died.

Scott dressed the 90-pound concrete goose in a different outfit every day. The goose arrived in Augusta with three outfits: a raincoat, an Uncle Sam costume, and a Native American princess outfit.

Scott, a 1939 graduate of Monmouth Academy, majored in home economics, and 70 years later, she put her sewing skills to work, creating costumes that put a smile on people’s faces as they drove by.

“Mum’s outfits always had grey ‘wings’ padded and sewn into the side seams,” Kinkade said.

Scott, who made much of her and her children’s clothing when they were growing up, had lots of spare material and plenty of time on her hands to sew. She made more than 100 outfits for the goose, which she called Georgie Boy or Georgie Girl, depending on how it was dressed.

Scott dressed that goose for over 20 years. She sat in her rocking chair on the porch overlooking the goose on her front lawn and watched people’s reactions. “It gave her something to do,” Kinkade said.

People stopped to have their picture taken with the goose, young children hugged it, and brides getting married asked that the goose be dressed in a wedding gown on their wedding day.

When bikers were holding their Toys for Tots run, she decorated the goose in its biker outfit, complete with a teddy bear on its back. The goose wore a Cony cheerleading outfit, a Red Sox uniform, a John Deere outfit complete with tractor, and a bumblebee costume. The goose has been dressed up as Mickey Mouse, Superman, a policeman, a fireman, a member of the military, the Cat in the Hat for Dr. Seuss’ birthday, the Easter bunny, Elvis, Santa Claus, and many more.

“People loved that goose so much. It struck a chord with everyone. Everyone looked to see what it was wearing,” Kinkade said.

During the blizzard of ‘98, a father and son Scott did not know stopped by to shovel around the goose so Scott could continue to dress it daily.

The 20th birthday of the goose was written up in a local paper, which inspired Walsh to write the children’s book.

Scott, a widow living alone, “found a way to share her gift and could brighten the lives of hundreds, if not thousands of people every day,” Kinkade said. “She brightened the lives of so many people that drove by.”

Scott had scrapbooks filled with notes from people who thanked her and told her how happy the goose made them feel. People brought gifts, scarves, and outfits to help dress the goose.

Every night, Scott dressed the goose for bed, either in a flannel nightgown complete with sleeping cap, candle, and wire rim glasses, or a rain coat. “She couldn’t leave it naked,” Kinkade said.

Scott lived across from the old Farrington Elementary School. Students loved to see the goose every morning. The goose was even interviewed by a local television station.

When she was no longer able to dress it, her daughters took over the task for her. Six days shy of her 96th birthday, Scott fell asleep in her rocker with her beloved coon cat in her lap and never woke up.

Scott’s legacy lives on at the new Farrington Elementary School, After Scott’s death, the family donated the goose to the school. It greeted students outside on the first day of school, but now lives indoors, where the tradition of wearing a new outfit every day continues.

The cost of the book is $15.95. In addition to the Jefferson Market & General Store, the book can be purchased on Amazon or by emailing the author at mainescribe@gmail.com.