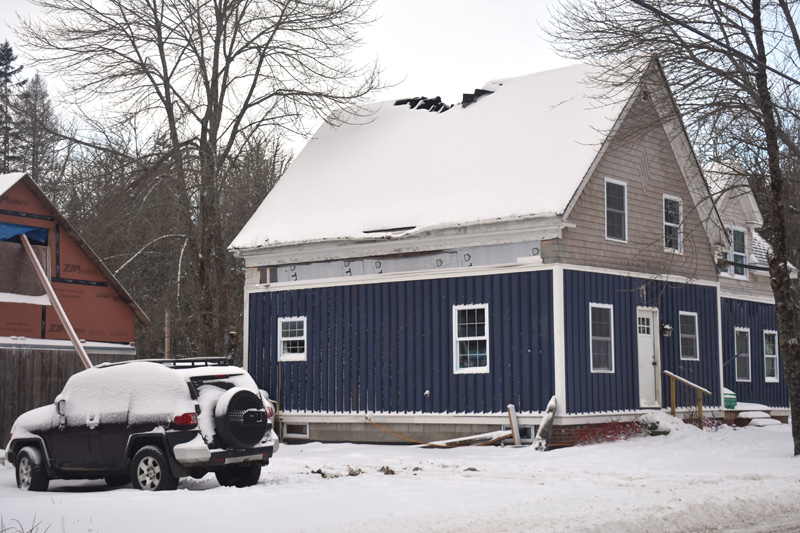 Fire damage is visible at the peak of the roof of 211 Medomak Road in Bremen. A chimney fire spread to the roof Monday, Dec. 2, according to Bremen Fire Chief Donnie Leeman. (Alexander Violo photo)

The tenants of a house at 211 Medomak Road in Bremen were able to exit safely when a chimney fire spread to the roof around the chimney the evening of Monday, Dec. 2.

There were no injuries, according to Bremen Fire Chief Donnie Leeman.

Lincoln County Communications dispatched the Bremen Fire Department shortly before 5:30 p.m. Once it was apparent the fire had spread, Bremen requested aid from neighboring departments.

According to Leeman, it did not take firefighters long to knock the fire down, but ensuring it was completely out was a lengthier task due to the location of the fire within the roof.

“It was a very quick knock-down. Overall, it took some time leaving the house, because gaining access to the fire proved to be pretty tricky,” Leeman said.

“Initially we hit it from the outside, and once we had sufficient personnel, we went in,” Leeman said.

Leeman credited neighboring departments for a successful response to the fire and said firefighters were able to make good use of Waldoboro’s new ladder truck.

“Waldoboro used their ladder truck to gain access to the roof around the chimney and that proved to be a valuable asset for us,” Leeman said.

Megan and Robert Hyson own the home, according to town records.

The Hysons are still gathering information, Megan Hyson said in an email, but right now, they plan to repair the house in the spring or summer. She said the home was insured, although the homeowners don’t yet know what will be covered.