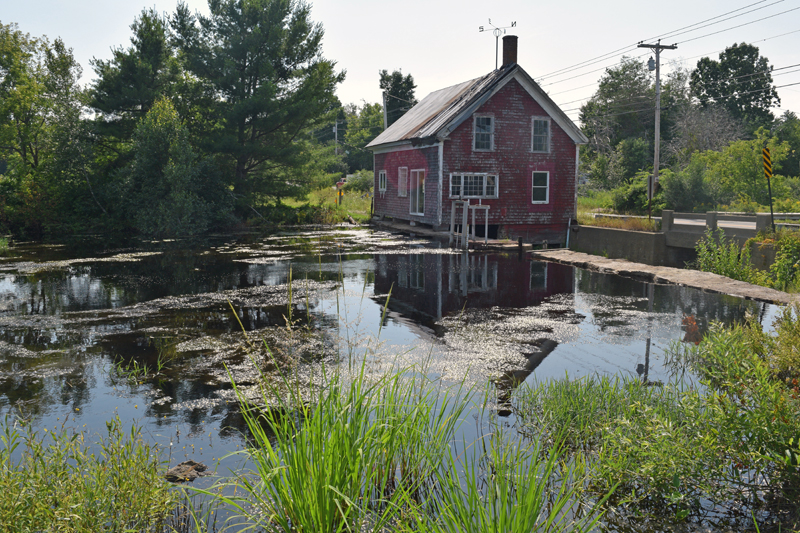 A view of the old mill house above the Clary Lake Dam on Mills Road in Whitefield after the Clary Lake Association’s annual meeting Sunday, Aug. 4. (Jessica Clifford photo)

After the resolution of a bitter, years-long fight over dam ownership and water levels, the Clary Lake Association is planning a bright future for the ecology and enjoyment of the lake.

About 55 members of the Clary Lake Association gathered to talk about the organization’s future, including a five-year vision, at its annual meeting beside the Clary Lake Dam on Saturday, Aug. 3.

The nonprofit Clary Lake Association was founded in the summer of 1960 with the aim to preserve, protect, and enhance the natural beauty and quality of Clary Lake and its watershed. According to the nonprofit’s website, it pursues this mission through educational programs, monitoring of water quality, and pollution abatement.

Today, anyone interested in Clary Lake can become a member of the association.

The association’s most recent achievement was acquiring ownership of the Clary Lake Dam in an effort to restore the lake’s water level after years of low levels and frustration for lakefront property owners.

The Clary Lake Association received the deed to the dam in October 2018 after a U.S. Bankruptcy Court judge approved the sale in late September.

“The board spent a lot of time this past winter thinking about, what are all the cool things we can do now that we’ve got a dam and high water and a community around us, and we came up with some ideas,” past President Malcolm Burson said. Burson completed his term as president at the close of the meeting, but will remain on the board of directors.

“What we came up with was a description of what, at least the board thought, we wanted to be known for five years from now,” Burson said. “We are just getting started with this new part of our life.” 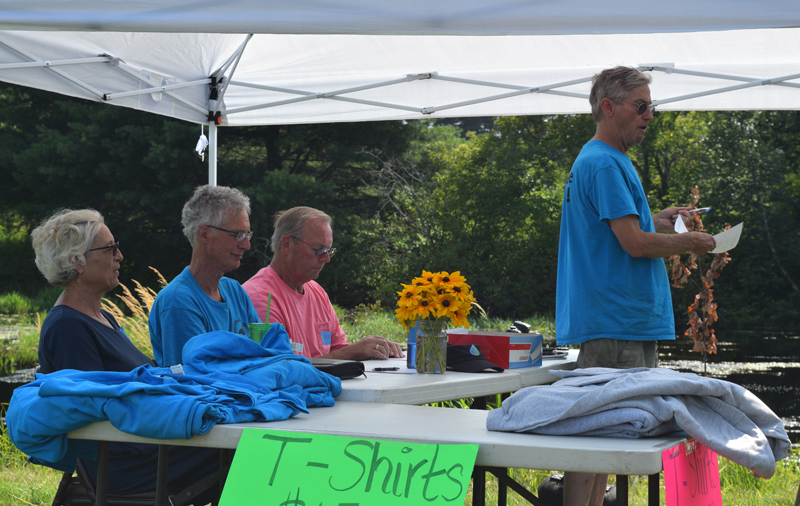 The Clary Lake Association Board of Directors’ vision includes active stewardship and growing awareness of the lake’s natural resources, as well as the creation of new opportunities for local communities to enjoy the lake.

The board came up with ways to achieve these goals and shared them with the members of the association.

Next, a “vision exercise” ensued. Association members broke into groups to brainstorm ideas that would contribute to stewardship and infrastructure, community involvement, and education and outreach.

In addition to the board’s ideas to continue monitoring water quality, protect the lake from invasive plants, and install dry hydrants in Jefferson and Whitefield, the association will monitor shoreline changes due to the changing water level of the lake.

In addition to ideas such as cleanup activities to build community around the lake, association members want to create a presentation and video to explain the lake’s history and possibly organize an annual Clary Lake Day.

As for education and outreach, the board is considering nature programs that connect local schools and the Whitefield Library.

“I’d love to see the kids from the Whitefield and Jefferson schools using this as a living lab for science class,” Burson said after the meeting.

The association members want to have a liaison with other local groups that share similar missions and offer boating, canoeing, and kayaking safety programs. 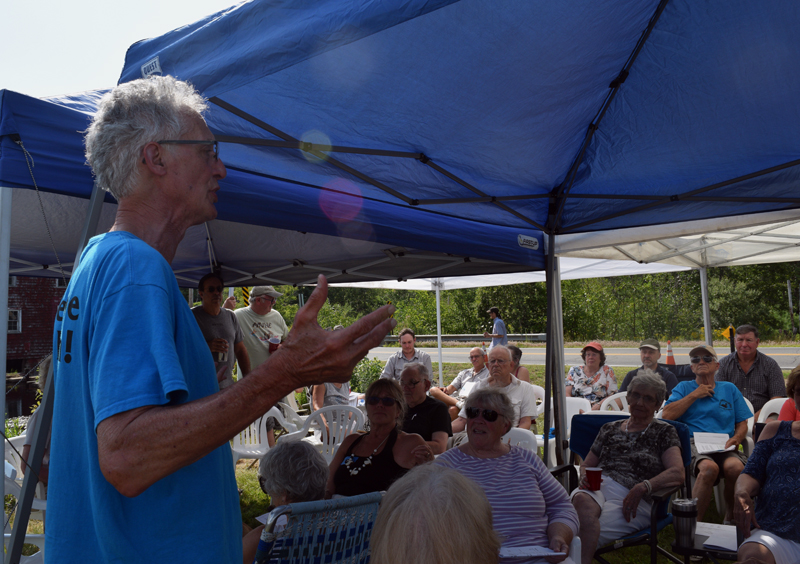 Others thought about installing signs showing what invasive plants look like.

On the idea of educational signs, Burson said the board has written a letter to the commissioner of the Maine Department of Inland Fisheries and Wildlife requesting permission to put up a two-sided kiosk with information about fishing regulations and invasive plants at the Jefferson boat launch. The board has not yet heard back.

“The board will take these up … to decide and set some priorities. We want to make sure we don’t do too much,” Burson said, referring to maintaining a manageable list of goals.

“We’re going to check in, in five years, to see how we did,” Burson said.

A presentation by Maranda Nemeth, senior watershed manager with Midcoast Conservancy, about the pursuit of funds for a feasibility study about establishing fish passage into Clary Lake and other possibilities for the area fell through at the last minute.

“I was planning on explaining our intention to explore the feasibility of establishing fish passage into the lake and our intention to establish river access, maintain lake water levels, and preserve historic features,” Nemeth said. “We are actively fundraising to do a conceptual study. We want to work with (Clary Lake Association) on this work every step of the way.”

The fish passage would target alewives, a species that spawns in freshwater lakes. According to Nemeth, in the Sheepscot River system, over half the acreage of ponds is blocked by dams.

“If we could open up Clary Lake, we would see improved water quality and wildlife balance in Clary, but the benefits would also radiate out to the greater Sheepscot River system,” Nemeth said. 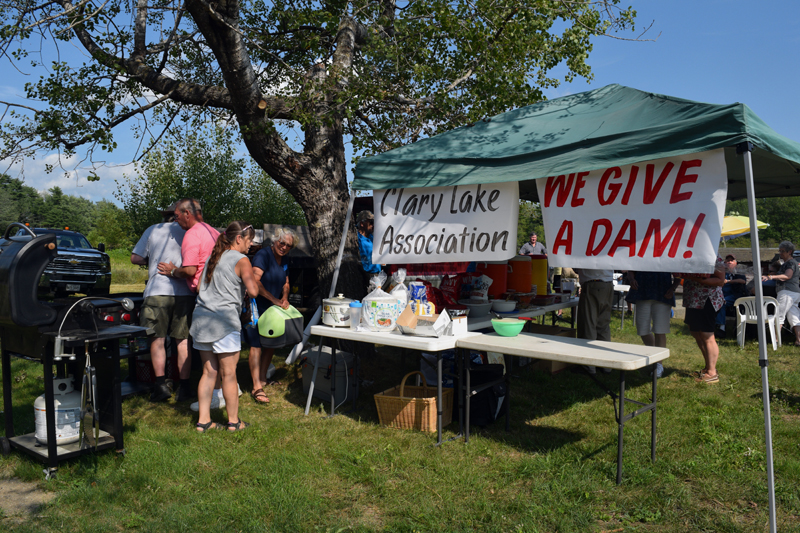 The Maine Department of Marine Resources has designated Clary Lake as a historic alewife pond, Nemeth said. This means alewives spawned in the pond prior to the installation of dams.

“I also wanted to begin to daydream a bit with the group – create a vision for what they could see at the property on the outlet of Clary Lake,” Nemeth said. “ADA trails? A future alewife festival? I have heard from the (association) board, but not the members.”

The ADA is the Americans with Disabilities Act.

Nemeth said she will continue to work with the board and potentially organize an event for this fall. 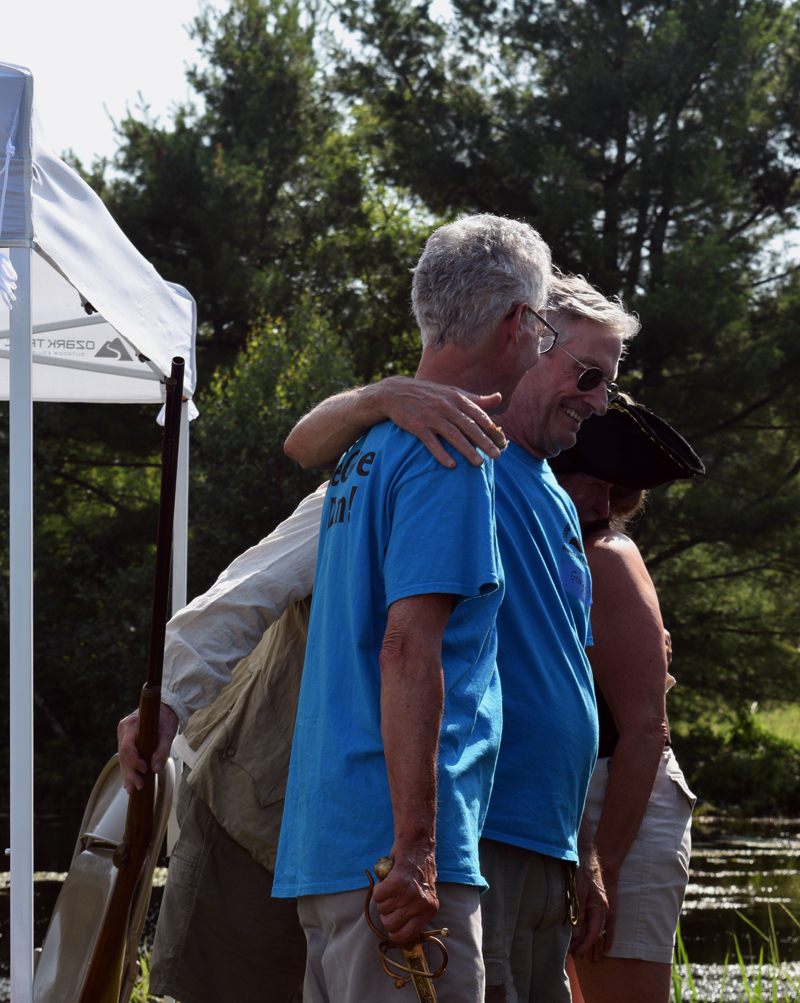 Clary Lake Association Secretary George Fergusson wraps his arm around former association President Malcolm Burson after giving him a dramatic thank you for his ongoing dedication to the association and knighting him as Sir George of Clary – Lake Keeper for Life. (Jessica Clifford photo)

Earlier in the meeting, the officers reviewed committee reports on issues such as dam operations and water quality.

The association filed an application to transfer the order, but AquaFortis LLC, which owns the small mill house above the dam, filed an appeal of the transfer last December.

In early June, a hearing was held and the appeal was denied. However, AquaFortis has appealed the decision.

The association is complying with the water-level order, Fergusson said.

“The (water-level order) describes a water-level regime for Clary Lake and we fully intend to comply with that regime to the best of our ability. Of course, we rely on Mother Nature cooperating by delivering rain from time to time, snow during the winter, etc.,” he said in an email after the meeting.

Mary Gingrow-Shaw, treasurer of the association, gave her annual report and talked about the proposed budget for next year.

After the meeting, Burson said he sees a bright future for the association and the lake.

“People are very energized and interested in not just being a group of people who were cranky about the dam and happen to be lakeshore owners, but people who are very interested in creating some new activities (and) some new opportunities,” Burson said.