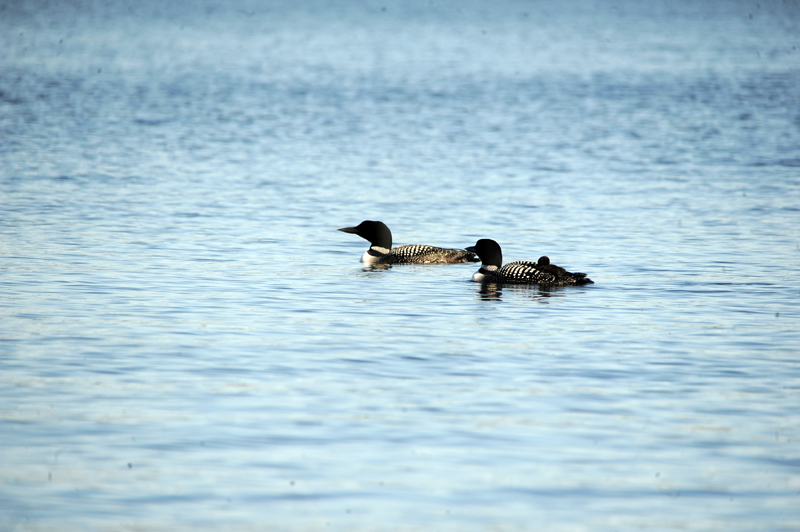 A mating pair of loons with their chick on Damariscotta Lake in Jefferson. (Paula Roberts photo)

In January, Clary Lake is an icescape. At the public boat access, just off North Clary Road, a few people huddle around an iceboat, slowly maneuvering it off its trailer. The lake is windswept but windless, the air still and bitter. Crows punctuate an otherwise white-grey sky.

And the loons? Their home, a temporary frozen tundra, is no longer hospitable. Just like every year, for the winter, loons travel south seeking warmer coastal waters.

The birds will return when the ice starts to thaw. Come May, mating pairs will find a suitable nesting site. Or at least, they used to. They might. With fluctuating water levels due to dams, high predation, and humans and their beach chairs occupying more and more of the lakeshore, loon chick survival rates are not looking strong.

But experts believe there may be a way to help.

The Maine Loon Restoration Project is a collaborative effort guided by Maine Audubon and partnering with the Penobscot Nation, Lakes Environmental Association, and the Maine Lakes Association. And, of course, an extensive roster of volunteers.

“The goal of this project is specifically to increase the number of chicks that Maine birds produce,” said Susan Gallo, executive director of Maine Lakes.

Over the next five years, the collaborative will build and install floating rafts as loon nesting sites. The rafts respond to more and more habitat interference and what experts call “nest failure.” The goal is to construct and place a total of 99 rafts in around two-dozen lakes across the state.

One of them is Clary Lake.

“We have just recently been contacted by (Maine Lakes) saying that Clary Lake has been identified as a priority lake and hope to work with us this spring on a loon raft,” said Secretary of Clary Lake Association George Fergusson.

At the lake, extending nearly 680 acres across Whitefield and Jefferson, all signs point towards an ideal loon habitat. Ample fish, space, and nesting grounds.

“Clary Lake is the perfect example of a place where we could try this out,” said Gallo, thumbing through her notes to find the exact count of chicks recorded by volunteers on Clary Lake since 1989. That total is six.

Gallo is hopeful that artificial floating platforms, or rafts, may change this. 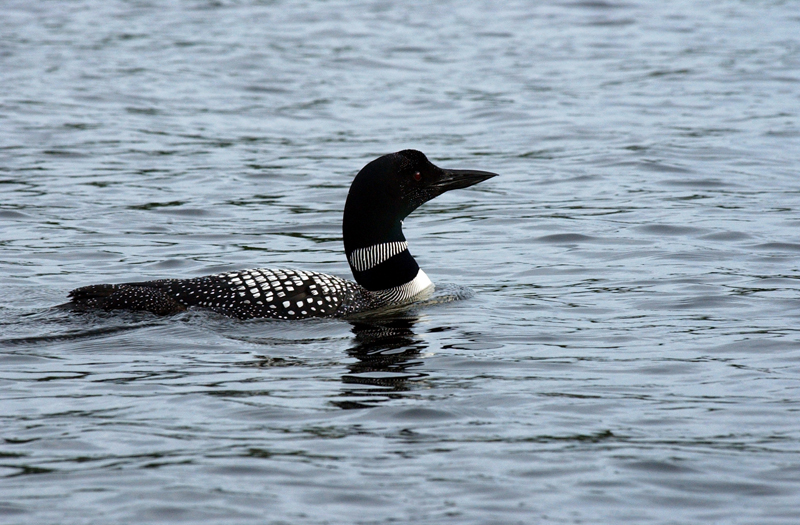 The rafts will be constructed by volunteers at workshops over the next few months. Some will be made out of cedar. But the wooden structures can prove challenging to remove, once exposed to the elements. So some rafts will puzzle together wire used for lobster traps and natural debris, including palm. The lighter rafts, project leaders hope, will be more versatile, less intrusive, and more mobile.

Similar rafts, which also have avian arches to help protect nests from eagles, have been successful in years past. Still, it can take up to three years for a mating pair to discover a floating platform; and even then, nothing is guaranteed. In other words, you can lead a loon to an artificial floating platform, but you can’t make it nest there.

Project leaders hope the rafts, at the very least, offer an alternative to birds struggling to find nesting grounds due to human-induced changes to their environment.

While the project is still in its early phases, its history is robust.

Funding for the effort came from environmental damages paid by the Bouchard Transportation Company, the responsible party for the Bouchard oil spill in Buzzard’s Bay in 2003. According to the National Oceanic and Atmospheric Association, when the Bouchard 120 barge collided with bedrock ledge, “an estimated 98,000 gallons of oil spilled into the coastal waters of Massachusetts and Rhode Island.” The spill seeped out over 100 miles of shoreline, oiling resident and migrant species, including loons.

Gallo recalled that about 500 oil-coated loon carcasses were discovered by volunteers following the spill. The following summer, when the birds returned to Maine lakes, some of their bodies carried traces of oil from Buzzard’s Bay.

The spill garnered attention – legal and otherwise – as teams of volunteers continued collecting oil-smothered animal bodies and debris. Photographs of the clean up exude something post-apocalyptic: People in yellow protective suits, heaps of bags marked as biohazards. But in 2010, after BP’s Deepwater Horizon spill in the Gulf of Mexico, the cameras shifted.

And environmentalists are ready to put it to use. Funding for the Maine Loon Restoration Project is channeled through Maine Audubon, who is spearheading the effort.

Since 1989, Maine Audubon has been home to the Maine Loon Project, which conducts annual loon counts. It also collaborates with projects like the Fish Lead-Free Initiative and the Signs of the Seasons Phenology Program with the University of Maine. The Maine Loon Project is separate from the still-emerging Maine Loon Restoration Project.

The loon count is designed to observe chicks in the first one to three weeks of their life, which also happens to be when predators are paying the most attention, too. It is high-mortality period for the new birds.

So, as Gallo put it, “The loon count doesn’t follow chicks, so, there’s no way to know if these loon chicks made it, if they survived. And it just doesn’t look good for Clary Lake, in terms of chick productivity.”

But with new rafts floated in early May, Gallo and other project leaders will be watching with anticipation, in the hopes that a pair just might choose to settle down on one.

Volunteers will be watching, too. In fact, Gallo said, “Volunteer teams are driving this whole process.”

The Maine Loon Restoration Project is still actively seeking information from lakeside residents, who may know more about loon populations prior to when the annual counts began about three decades ago.

“People are really into their loons,” noted Gallo, “they have detailed records and observations that we just don’t have yet.”

Webinars will take place this week and into early March, when raft-building workshops are set to kick-off. Workshops will be open to anyone interested in working on the project. More details will be available later this month.

For now, the loons are elsewhere, unaware of the busy volunteers, the data collecting, the webinars, and the soon-to-be noisy workshops where many hands will craft rafts in the hopes of pleasing a pair of the majestic and territorial birds.