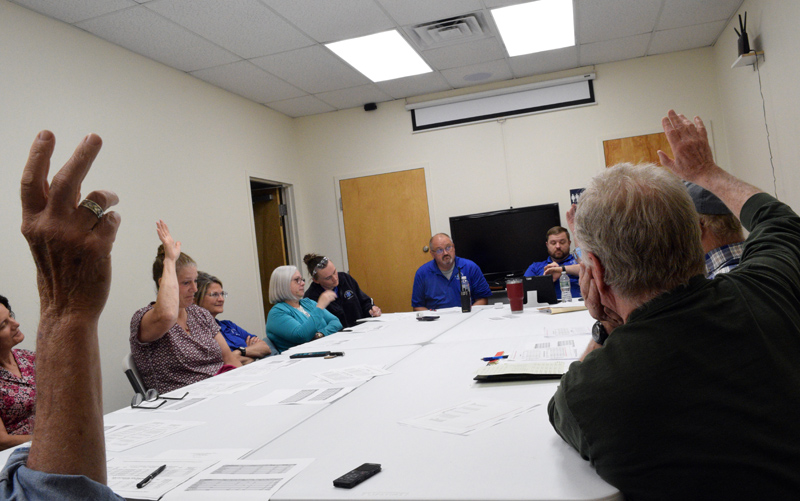 The Central Lincoln County Ambulance Service Board of Trustees votes to change the funding formula for the service to base founding towns contributions solely on property tax valuation on Monday, June 27. The board also voted to keep the formula in place for five years, starting in the next fiscal year. (Evan Houk photo)

The Central Lincoln County Ambulance Service Board of Trustees approved a new funding formula that will stay in place for the next five years on Monday, June 27.

The formula will calculate how much each founding town must pay in contributions based solely on state property tax valuation. The board approved the formula by a vote of 5-1, with South Bristol’s representative, Betsy Graves, casting the dissenting vote.

“The selectmen feel that using just the valuation, we pay more into the coffers for the county because our valuation is so high,” Graves said.

The new funding formula will go into effect for the next year and will stay in place for five years, unless there is an emergency and a unanimous vote is cast to change it. Since 2011, contributions have been calculated using 50% call volume and 50% valuation.

The board of trustees has one representative from each of the six founding towns – Bremen, Bristol, Damariscotta, Newcastle, Nobleboro, and South Bristol.

CLC Ambulance also serves Edgecomb and part of Jefferson by contract. The service previously contracted with Alna until voters approved a switch to Wiscasset Ambulance this past April.

In all three of the presented options for funding formulas, the contract towns have 10% added to their totals for not being a founding town.

“That’s the penalty for not owning the ambulance service. That’s what we came up with last meeting,” CLC Ambulance Service Chief Nick Bryant said.

In addition to the tax valuation formula that was approved, the board also considered staying with the current formula or switching to a formula split evenly between call volume, population, and valuation.

The board voted in December 2021 to change the formula to an even split between the three variables, starting in 2023, but the most recent vote overrode that decision.

The South Bristol Select Board has long opposed a funding formula that includes valuation because it feels the town is being unfairly charged because of the high state valuation of properties in town.

The formula was updated in 2011 to include the town of origin of the calls instead of just tax valuation after a request from South Bristol.

The Newcastle Select Board wrote a letter explaining how the board unanimously supports using only property tax valuation in the funding formula.

“Valuation is used by virtually all other entities to determine taxation levels, county services, schools, and property tax,” McFarland read from the letter at the start of the meeting. “It’s the most fair and least subject to interpretation.”

Peter Goth, Bremen’s representative, said the funding for CLC Ambulance is an “insurance policy” to make sure town residents have an ambulance respond when it is needed.

“This is about simplifying things,” Goth said.

Damariscotta’s representative to the board Tom Anderson asked if it is possible to determine town of residence for patients.

Bryant said it would be extremely difficult to begin to track that data.

“There’s a word in here, ‘herculean,’” McFarland said in reference to the Newcastle Select Board’s letter.

“There’s absolutely no clear metric to determine population,” Newcastle Select Board Chair Joel Lind said, who was in attendance at the meeting.

Bryant agreed with the valuation formula, saying it makes sense since property tax valuation is used to fund county services and local governments and is determined by the state.

“It’s the fairest to the individual taxpayer,” Lind said.

In a chart with budget projections provided by Bryant, the valuation formula distributed the taxpayer burden most evenly between the towns, compared to the other options presented.

The board discussed how Damariscotta is hit hard by call volume because a lot of ambulance transfers originate in Damariscotta at LincolnHealth’s Miles Campus and the town is a service center that many people travel to.