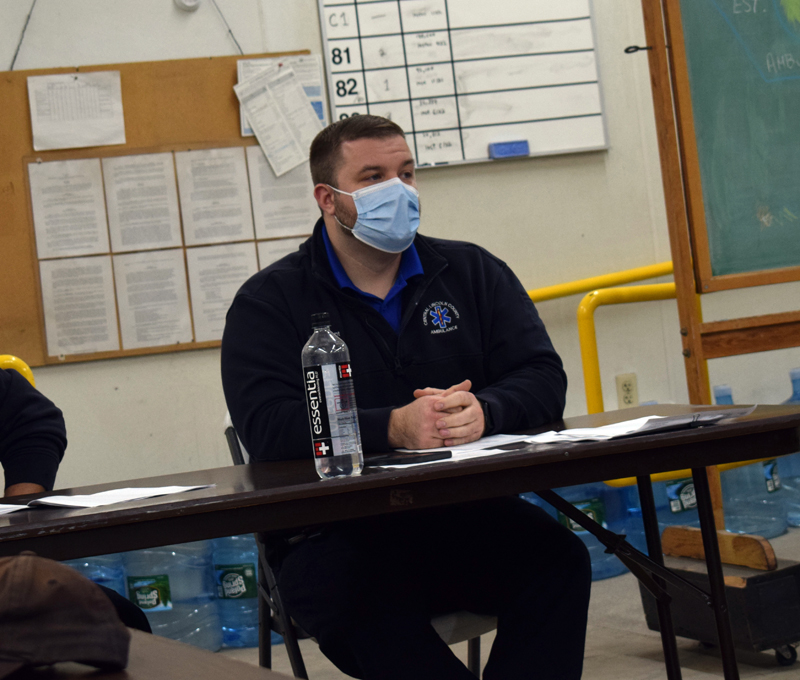 Service Chief Nick Bryant explained that to retain employees, the ambulance service has to have competitive wages and all the other services in Lincoln County are also planning increases.

“You’ve got to give them something for longevity. It helps retain people,” Bryant said.

Bryant said he would like to give the raises starting on Jan. 1, which will be difficult since the ambulance service runs on a calendar year and most of the founding towns operate on a fiscal year schedule, meaning the allocation would not be approved until annual town meeting in June.

He asked if the towns can find some way to make the payments earlier, acknowledging it is a “heavy lift,” so that he does not have to seek other sources of funding like a credit line.

The board of trustees also pledged to discuss the funding formula for the six founding towns, along with an inter-local agreement, at future meetings.

The board has one representative from each of the six founding towns, Bremen, Bristol, Damariscotta, Newcastle, Nobleboro, and South Bristol.

A representative from each town except Bremen attended the meeting. Selectmen from Damariscotta, Nobleboro, and South Bristol and Bristol Town Administrator Chris Hall also attended.

Hall noted that towns can use federal American Rescue Plan funds to cover the CLC Ambulance assessment and pay it out immediately.

Bristol has scheduled a special town meeting for Wednesday, Dec. 22, for residents to vote on how to spend the funds.

After a modest increase in requests to the founding towns last year, each town is seeing at least a doubling this year to cover the payroll jump. 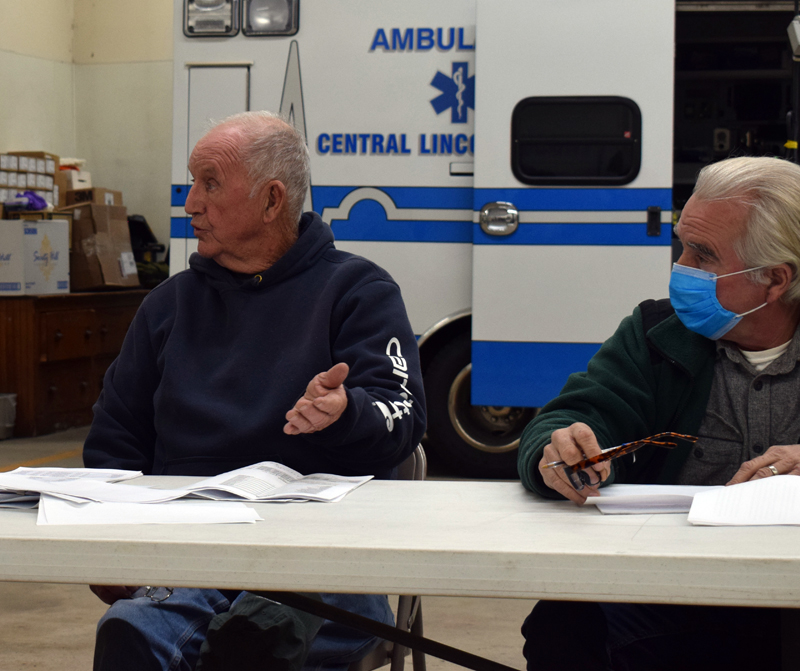 South Bristol Selectman Chester Rice disagrees with the funding formula for the six founding towns of Central Lincoln County Ambulance Service during a budget meeting on Oct. 25. Rice says the formula should be based on call volume and not valuation. (Evan Houk photo)

Bryant noted that the towns are still paying less than Boothbay, Boothbay Harbor, Waldoboro, and Wiscasset, which have their own ambulance services.

An inter-local agreement has never been approved between the six founding towns. A draft has been prepared by former Newcastle Town Manager Jon Duke, Damariscotta Town Manager Matt Lutkus, and Hall.

Hall said the draft is a working document for selectmen and board of trustees members to review and make changes.

To calculate its requests for each town, the ambulance service uses a formula based half on town valuation and half on call volume.

South Bristol Selectman Chester Rice strongly disagreed with the funding formula for the founding towns’ contributions, saying the service has nothing to do with valuation and should be based on call volume.

He argued that South Bristol is subsidizing all the other towns’ ambulance services because the call volume is so low in South Bristol. South Bristol had 55 calls in 2020, compared to 499 in Damariscotta, the most of any town.

Damariscotta Selectman Tom Anderson noted that many of the ambulance calls in the town are for visitors who may not be residents of Damariscotta.

At the request of the board of trustees, Bryant ran the numbers using a formula that based funding on 50% call volume, 25% valuation, and 25% year-round population.

Anderson said he and Selectman Josh Pinkham came to the budget meeting expecting to vote on the funding requests previously presented to the board on Oct. 20, which are based on the current formula.

Anderson motioned to accept the requests as presented and for the board of trustees to look at how the funding formula can be adjusted in the future. The motion passed 5-0, with South Bristol’s representative to the board of trustees, Alden McFarland, also voting in favor.

Bryant said that Edgecomb is under contract for another two years and the contract was originally signed when some of the founding towns were only paying around $3,500 for the ambulance service.

The board suggested that Bryant reach out to Edgecomb to ask the town about contributing more or possibly renegotiating the contract, at least to be on par with the other contract towns of Alna and Jefferson, which will pay about $900 per call this year.