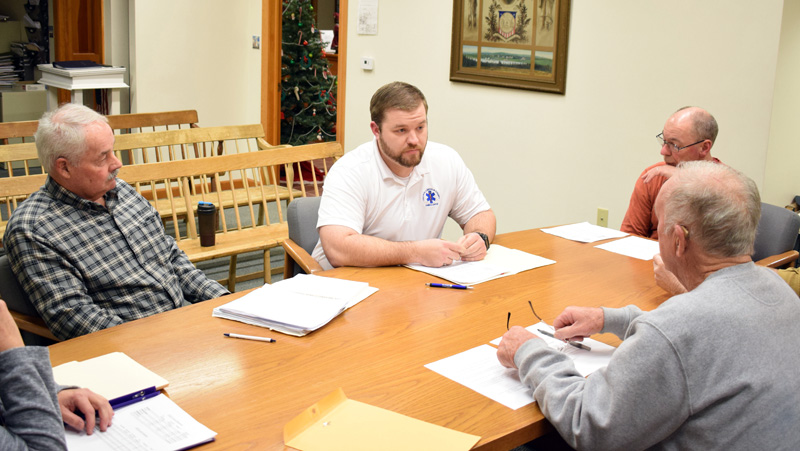 Central Lincoln County Ambulance Service Inc. will ask its six member towns to nearly double their contributions this year, but expects the requests to level off going forward.

The Damariscotta-based agency points to multiple factors for the second straight year of sharp increases: falling revenue due to insurance reimbursement rates and the loss of nonemergency transports, growing costs for payroll and other expenses, and the need to replenish a capital reserve fund after depleting the fund to cover operating expenses.

The total is up $120,887.50 or 93.64% from last fiscal year, after an $85,114 jump the year before. However, Service Chief Nick Bryant sees the requests leveling off after this year, once the ambulance service rebuilds its capital reserve account.

The agency is rebuilding its capital reserve account after using it to avoid increasing the burden on the member towns after revenues began falling in 2014.

Prior to 2015, the money from the member towns went into a reserve fund to save for new ambulances. Bryant said new ambulances cost about $250,000 each and should be replaced every two or three years.

Bryant said the service has a lot of equipment in need of replacement, so it is starting to set aside money for these upgrades. A new cardiac monitor will cost $30,000, a new automated CPR machine close to $18,000, and a new stretcher $17,000.

CLC Ambulance has employees who “do this 40-60 hours a week for $14 an hour with a 15-year-old stretcher and a truck that didn’t start when they tried to go out on it. We can’t operate that way,” Bryant said.

According to Bryant, a major factor in the decline in other revenue is the loss of nonemergency patient transports, such as those from Cove’s Edge to LincolnHealth’s Miles Campus. The revenue from these “basic life support” transports has decreased by approximately $250,000 since 2015.

Medicare no longer considers these transport trips medically necessary and will not pay for them.

CLC Ambulance also does not get paid for the full amount it bills to Medicare, MaineCare, or Medicaid. Medicare and private insurance companies set maximum allowable rates for emergency calls and will rarely pay more than the set amount.

The ambulance service’s board of trustees approved its budget Nov. 12, after a three-hour discussion with one selectman from four of the six member towns and Bryant. The 2020-2021 budget totals $1,156,000.

The board has one representative from each of the six founding towns, Bremen, Bristol, Damariscotta, Newcastle, Nobleboro, and South Bristol. CLC Ambulance also serves Alna, Edgecomb, and part of Jefferson by contract.

Bryant said that at the meeting, the board agreed that CLC Ambulance should have started increasing the requests from member towns years earlier, rather than using up the reserve account for operating costs.

Bryant plans to meet with each of the member towns to explain the increases.

Bryant and Alden McFarland, South Bristol’s representative to the service’s board of trustees, met with the South Bristol Board of Selectmen on Dec. 19. They explained the need for the increase in funding and talked about the formula used to calculate each town’s share.

To calculate its requests for each town, the service uses a formula based on town valuation and call volume.

Chester Rice, chair of the board of selectmen, disagrees with the valuation aspect of the formula. He pointed out that towns like Newcastle and Nobleboro, with more than double South Bristol’s call volume, will pay less toward the ambulance service this year.

“I think it’s a great service. We need the service. But since day one, I’ve said this formula is wrong,” Rice said.

Bryant said that if the service was using the same formula it was using two years ago, taking into account only valuation, South Bristol would be paying 22.52% of the total contribution from member towns, rather than 13.59%.

He suggested a meeting of all six member towns before the next budget season to hammer out a funding formula or inter-local agreement that all the towns agree on.

The South Bristol selectmen said they were not aware of the CLC Ambulance board’s Nov. 12 meeting and therefore did not attend.

“This increase seems to be substantial and this is the third year in a row. Do we see this leveling off?” Selectman Kenneth Lincoln asked.

“This year’s going to be your leveling off,” Bryant said.

McFarland said another factor in the budget increase is growing maintenance costs, particularly for two aging vehicles. The agency is saving money to replace those vehicles.

Bryant said in a follow-up interview that the two 2010 Ford diesel ambulances are not suited for ambulance work, with the constant starting and stopping of the engine, and have been hemorrhaging money in maintenance costs since they were purchased. Each ambulance has more than 130,000 miles.

“The goal is to replace these and create a model where we don’t have to rely on capital campaigns for new ambulances,” Bryant said.

McFarland told the selectmen that CLC Ambulance has been using surplus funds for the past few years to avoid asking the towns for more money. The surplus funds would normally have been used to replace ambulances, rather than for everyday operations, he said.

“The reality is that this should have been going on three or four years ago. … But the reality is, the monies are depleting and the costs are increasing,” McFarland said.

Bryant ran through the major changes in this year’s budget for the selectmen.

Expenses for the maintenance and repair of ambulances are up from $36,000 to $50,000, or 38.89%. Bryant said CLC Ambulance is running a capital campaign to raise money to replace the ambulances.

“Minimum wage is going up. Right now, an (emergency medical technician) makes $14 an hour. We can’t keep people working for us at that,” Bryant said. Maine’s minimum wage rose to $12 per hour on Jan. 1.

“We’ve saved in professional fees. We’ve renegotiated our contract with our billing companies. They charge us 3% instead of 5% now. … We got a grant this year which we were able to replace an aging stretcher with. We’re trying to do what we can to keep the impact minimal,” he said.