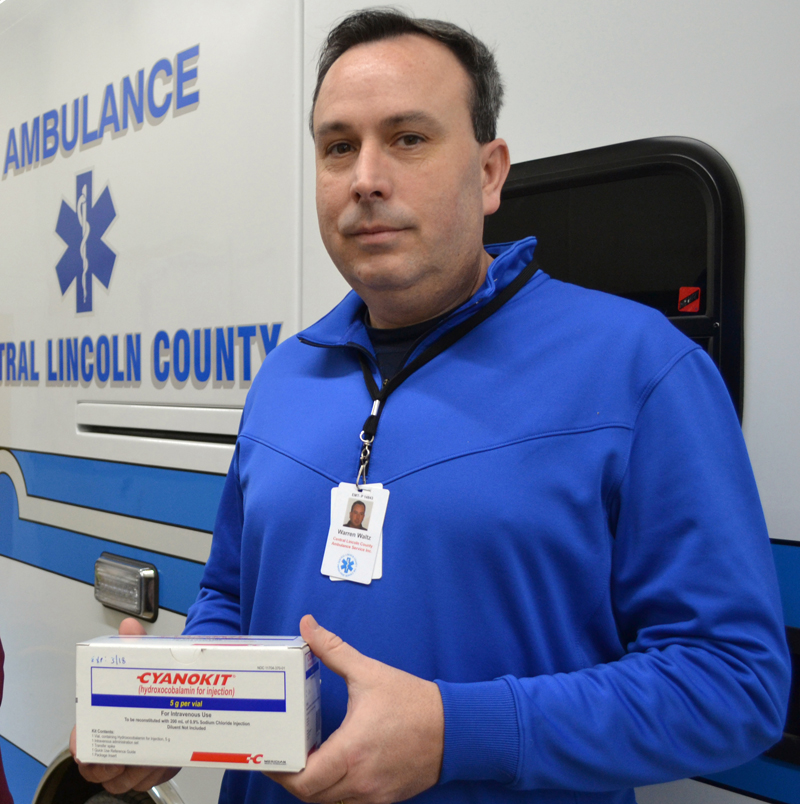 Warren Waltz, service chief of the Central Lincoln County Ambulance Service, in a 2017. After 19 years in the role, Waltz will step down Oct. 31. (Maia Zewert photo, LCN file)

The service chief of the Central Lincoln County Ambulance Service for the last 19 years will resign effective Oct. 31, according to board members.

Warren Waltz’s resignation will conclude a 19-year run as service chief for the Damariscotta-based agency.

Waltz volunteered with the ambulance service, became its first full-time employee, and worked as a paramedic supervisor before becoming service chief, he said. He has spent a total of 28 years with the organization.

Scott Shott, vice chair of the Central Lincoln County Ambulance Service Inc. Board of Trustees, said the board will begin a search for Waltz’s replacement in the immediate future.

Shott represents Newcastle on the board, which consists of residents of each of the agency’s incorporating towns.

Board Chair Mary Trescot spoke highly of Waltz and their time working together during her 17 years on the board.

“It was a good experience. He was always pleasant, and when I needed something, he always helped to get it,” Trescot said.

In a letter to the editor of The Lincoln County News, Trescot said the trustees wanted to recognize and thank Waltz for his many years of hard work and dedication to the health and safety of the region.

“Warren’s steadfast leadership and business skills not only established our agency’s reputation for high-quality care, it is also known for its cost efficiency in the towns we serve. We wish Warren all the best in his future endeavors,” Trescot said in the letter.

Trescot said the board will start to advertise the position as the end of the month approaches.

Waltz said his favorite part of the job was helping people.

“The people you get to take care of, that is my absolute favorite, and the people I work with, they are a pleasure to serve with,” he said.

“It’s just kind of the time,” he said of his impending departure.

Waltz said he decided to become a paramedic while volunteering with the Nobleboro First Responders after high school.

“I started with the first responders and didn’t have a lot of interest in it when I first went to calls, but I went to a medical aid call where a neighbor’s son was tragically injured and it sparked my interest and got me thinking, if I was going to get into this, I should get the training so I could help people out,” Waltz said.

In addition to working for CLC Ambulance, Waltz said he worked for Medic Ambulance in Portland for a few years.

During his remaining time at CLC Ambulance, Waltz will help with the transition phase and get financial information in order for the year’s end.

After Oct. 31, Waltz plans to take a little break and spend time with his family. He expressed interest in teaching courses in emergency medical services down the road.

“It’s something I have done before and would be interested in doing again,” he said.

The Central Lincoln County Ambulance Service was founded in 1968 and provides emergency medical services to Alna, Bremen, Bristol, Damariscotta, Edgecomb, Jefferson, Newcastle, Nobleboro, and South Bristol. The service has been in talks with the town of Wiscasset to potentially serve the county seat as well.

Now on Piper Mill Road in Damariscotta, the station was formerly at the current location of the Newcastle town office.