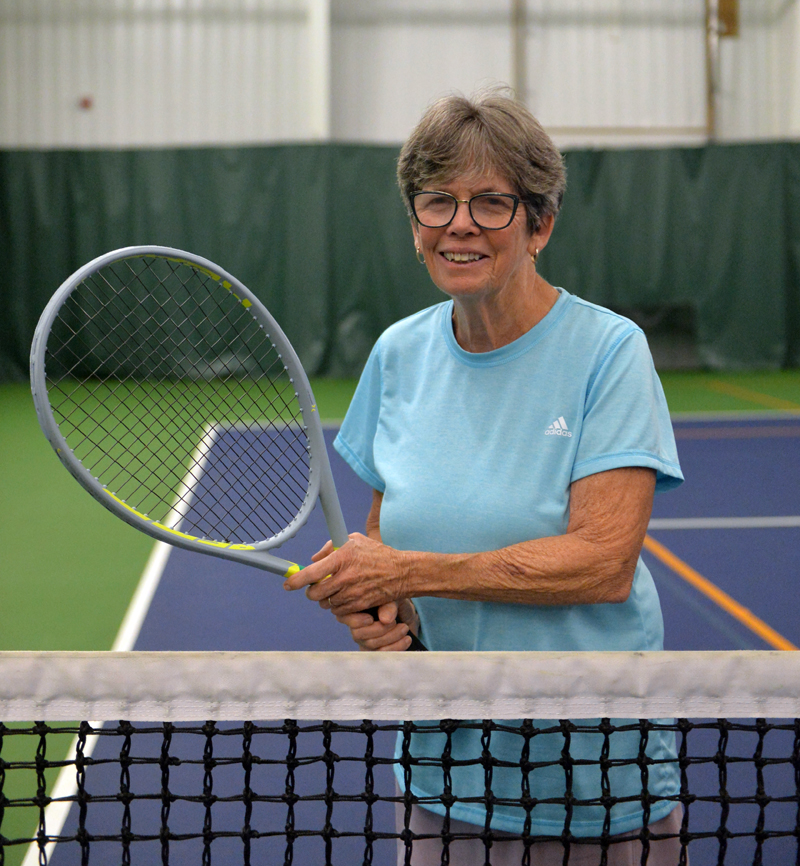 Central Lincoln County YMCA Racket and Paddle Sports Director Lisa Gilbride, the face of racket sports at the Y for the past 27 years, is retiring at the end of July. There will be a celebration in her honor in September.

“Lisa has been a true Y leader for 27 years, building up our tennis and pickleball programs to a high caliber of service with an amazing staff team and an active volunteer and participant community,” said CLC YMCA CEO Casey Clark Kelley. “Lisa has led collaboratively, working with other organizations, schools, and businesses to build community and ensure access to all for her programs and for the Y. She has led the Sanford Open event for 16 years, ensuring the funds are raised annually to support free tennis for kids. Thousands of kids have learned to play tennis at our Y because of these efforts. We will certainly miss Lisa’s quick wit and humor at our staff meetings but know that she will stay connected to our community.”

When Gilbride took the job almost three decades ago, there were 60-70 people playing racket sports, now there are over 400. She does not take credit for the increase in players, however.

“Having a better facility (the Sanford Family Tennis Courts) makes a difference,” Gilbride said. She also credited the great people who work at the Y and brought their own visions and have added it to the program as big factors in the success.

“Youth tennis is our biggest accomplishment,” Gilbride said. The Y’s mission-based program gives tennis lessons and puts rackets in the hands of youth.

“It gets kids active in tennis, which we hope leads to a lifetime sport. We are very proud of that,” Gilbride said.

One only needs to look at the successes of the Lincoln Academy tennis teams to see the YMCA’s influence in the community. Jordan Friedland started the CLC Y program as a 5-year-old and went on to win LA’s first state title. Lincoln girls teams won three state titles, including this past spring. Most of the team grew up playing tennis at the Y.

“Our youth programs are not about winning, but it shows we are doing some good things here,” Gilbride said. “They started as 5-year-olds and stuck with it. Longevity is what we are proud of.”

Under Gilbride’s leadership, the Y has started new programs, including cardio tennis, which she refers to as the “gateway drug” to learning to play tennis through exercise. The program uses a transitional youth ball, which is slower.

“Anyone can do it. We play music, run and laugh. It is pain-free exercise. It has attracted a lot of people who would not normally play,” Gilbride said.

Triples tennis has also been introduced, which is three-on-three tennis. Gilbride described it as a very fast-paced and fun activity.

The Y’s Rusty and Recovering program is a senior group for players who are recovering from injuries or heart surgery. The program is also for adults who have not played in a while and want to start playing again. A green youth ball, which is a little slower, is used.

Gilbride has been a big part of the Y’s U.S. Tennis Association teams over the years, calling the program “the best thing USTA ever did.” Beginners could be national champs at their level, since players are matched up based on their ability and playing level. Several Y members have won local league and state titles, and a few have advanced to All New England Sectional play.

Gilbride is proud to have been a part of the CLC Y’s program that welcomes everyone to play tennis, from the age of 3 to 93 and beyond.

“It has been a fun job, a fabulous job,” an emotional Gilbride said. “The staff and members and all the people have been wonderful. It has been an honor to work here. The Y is a great place to work. Everyone is so supportive, that is why the program has been so successful. I have loved every minute of it. Even the tough parts.”