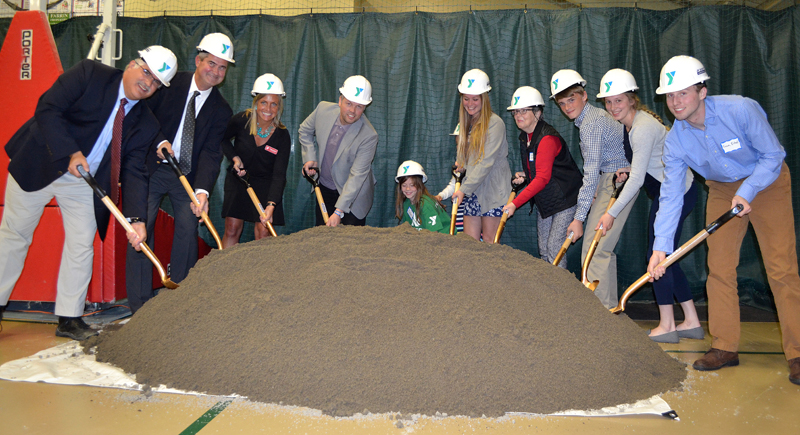 The CLC YMCA held a ceremonial groundbreaking for the first phase of its expansion project during its annual meeting the evening of Tuesday, May 9.

The groundbreaking was one of the accomplishments the CLC Y celebrated during the evening, including individual contributions to the Y and its programs in the past year, the renaming of the Y’s gym after longtime supporters Janice and the late Neil Sprague, and the success of the 2016 annual fund drive.

CLC YMCA Board of Directors Chair Dennis Anderson said the Y is “building a community center run by the Y.”

“We don’t want to have a building without a soul,” Anderson said. “Perhaps in the past, the Y has been viewed as ‘just a gym,’ but this space is about breathing new life into our commitment to the community.”

The addition will include a new entrance and lobby for the Y, as well as a new fitness room, locker rooms, and mechanical space. In addition, a community kitchen will be built and utilized by Focus on Agriculture in Rural Maine Schools.

While the construction project is underway, the CLC YMCA offices, exercise programs, and board meetings will take place in buildings around the Twin Villages, Hamblett said. Ann and Dirk Poole, owners of Milling Around in Newcastle, have offered the use of the office space above their business to the Y.

During the summer, exercise classes will be held at Lincoln Academy, and the CLC YMCA Board of Directors will use the board room at LincolnHealth’s Miles Campus in Damariscotta for its meetings.

“Because of the generosity of the community, we are able to make this a seamless transition,” Hamblett said. 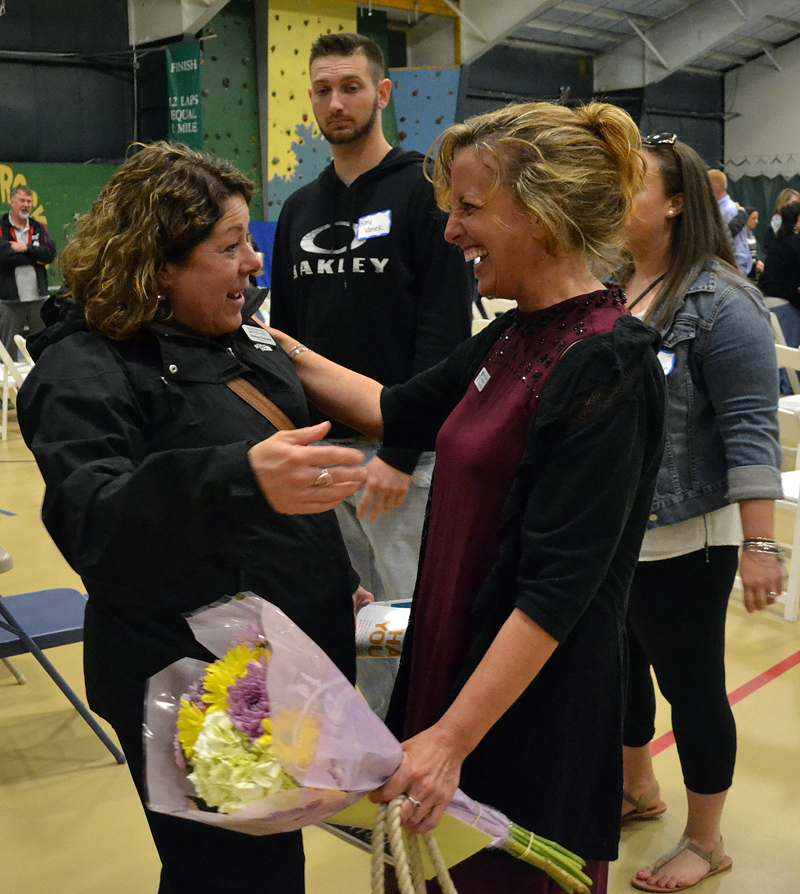 Damariscotta Region Chamber of Commerce Executive Director Stephanie Gallagher (left) congratulates Karen-Ann Hagar after the CLC YMCA annual meeting Tuesday, May 9. During the meeting, Hagar, the youth and teen program coordinator and community outreach coordinator for the Y, was named the recipient of the Healthy Living Award. (Maia Zewert photo)

In addition to celebrating the future of the Y, the annual meeting also recognized the contributions of two of its most faithful supporters. In honor of the contributions Janice Sprague and her late husband, Neil Sprague, made to the CLC YMCA, Anderson said the gym has been renamed the Janice and Neil Sprague Family Gymnasium.

Four individuals were honored for their contributions to the Y during the evening’s awards program. Karen-Ann Hagar, the youth and teen program coordinator and community outreach coordinator, received the Y’s Healthy Living Award.

In presenting the award to Hagar, board member Anni Pat McKenney said Hagar “bleeds the Y,” oversees five after-school programs, empowers the community, and is behind the success of the Fill the Bus and Tree of Giving programs.

Chrissy Wajer presented the Social Responsibility Award to Ann Poole for her contributions to the board of directors and the generosity both Ann and her husband have shown by offering office space to the Y.

Evan Eckel received the Youth Development Award from Hagar. Eckel serves as one of the youth representatives on the CLC YMCA Board of Directors, assists with the Y Teen Leaders Club, and co-leads the middle school Y Teen Leaders Club, Hagar said. He is also involved with the planning committee for Damariscotta Pumpkinfest.

Anderson presented the final award of the evening, the Character Development Award, to David Stackhouse. Since 2009, a fundraiser started by Stackhouse has raised more than $150,000  to award scholarships for kids to attend Camp Knickerbocker.