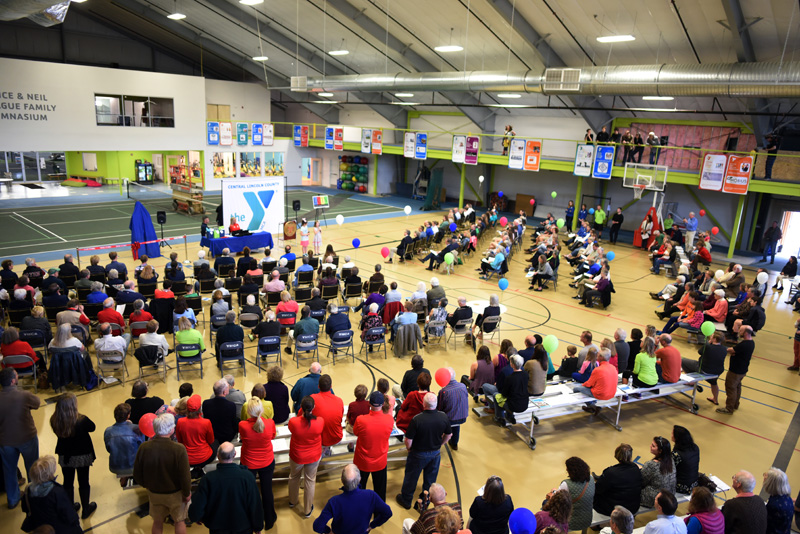 More than 300 people attended the grand reopening of the Central Lincoln County YMCA in Damariscotta the afternoon of Sunday, April 29.

The event, a celebration of the expansion and renovation of the facility, took place in the Janice and Neil Sprague Family Gymnasium. It included speeches, performances from the students of the Y-Arts program, award presentations, and a ribbon-cutting.

The expansion and renovation, which began in May 2017, included a new elevated track that goes around the gymnasium, a kitchen, new locker rooms, a connection to public water and sewer, a gas-fired furnace, new insulation, new sprinkler and security systems, fiber-optic cables to provide internet and free Wi-Fi, and new exercise spaces and equipment.

A second phase of the project will add a swimming pool.

“The feedback has been over-the-top positive,” CLC YMCA CEO Meagan Hamblett said. “People love the openness, they loved the food that was served by our FARMS at the Y program, the new fitness equipment, the colors, the art, the track, the locker rooms, the natural sunlight … the list goes on and on.”

Hamblett opened the ceremony by thanking the individuals and companies that assisted in the renovations and offered their services for the reopening.

She used the Helen Keller quote “alone we can do so little; together we can do so much” to describe the community effort behind the renovation. The quote “epitomizes what our community has wrapped its arms around and has invested in,” she said.

Hamblett went into the history of the Central Lincoln County YMCA, and its 1970s beginning as a recreation center started by Janice Sprague and her late husband, Neil Sprague. She thanked them “for having a vision.”

“It was all about having a safe place for kids to go after school,” Hamblett said.

Children from the YMCA’s Y-Arts program performed, with Josephine Shea and Sophia Mansfield singing “How Far I’ll Go” from the Disney movie “Moana” and the whole group singing “The Battle Light,” a song from the play “Young Mark Twain.” The group had performed the play at the Lincoln Theater April 13 and 14.

Michelle Michaud, staff assistant to U.S. Sen. Susan Collins, read a letter from the senator congratulating the YMCA and the community on the newly renovated space.

Teague Morris, outreach director for U.S. Sen. Angus King, read a congratulatory letter from King. “It is organizations like yours that help make Maine an extraordinary place to live,” the letter read.

Tor Glendinning, an architect from 44 Degrees North LLC who worked on the project, shared a story of overhearing two young boys walking into the renovated building say, “‘Dude, this place is awesome.’”

“That’s all I needed to hear,” Glendinning joked.

John Scott, of J.F. Scott Construction, said he wants those involved in the renovation “to recognize the impact that you’re going to have on the future generations.”

Janice Sprague and her grandson, Nate Masters, then cut the red grand-reopening ribbon while surrounded by YMCA board members and staff.

Lisa Gilbride, the YMCA’s racquet sports director, spoke about the importance collaboration has had in spreading the word about the YMCA.

“(People) have a community, they have a place where they can go … they have a family … We are now the community hub,” Gilbride said.

Awards were then given to members of the community that have made a difference at the YMCA.

David and Amy Stackhouse received the 2017 Annual Fund Recognition, presented by Molly Cyr, YMCA development coordinator. They were being recognized for “their hard work, dedication to the Y, and for being such a great community partner,” Cyr said.

Jeanne Davis, a diabetes prevention lifestyle coach at the YMCA, received the Healthy Living Award, presented by Healthy Living Director Casey Clark Kelley. Kelley described Davis as “compassionate, but forthright. She is nurturing, but has a no-excuses kind of attitude.”

Schuyler Farrell received the Youth Development Award. Karen-Ann Hagar, the program and outreach coordinator, presented the award, saying she “could go on and on” about Farrell’s accomplishments.

Farrell, who is the Y Leaders Club chair, has completed over 100 hours of community service this year, and is involved in many community groups.

Hagar read quotes of praise from other people in Farrell’s life, such as her mother, basketball coach, Spanish teacher, Lincoln Academy yearbook adviser, pastor, and her employer, Cynthia Weiss at King Eider’s Pub.

The Social Responsibility Award was given to Hagar Enterprises and J.F. Scott Construction, both of which donated supplies, time, and ideas to the renovation, including improvements to the Y’s baseball field and batting cages that were not part of the original budget. Hamblett presented the award, saying “These guys are the epitome of social responsibility.”

The Character Development Award was given to Rob and Stephanie Nelson, and was presented by CLC YMCA Board of Directors Chair Dennis Anderson. The individuals who receive this annual award “embody the core values of our institution and our mission,” Anderson said.

Anderson recognized the incoming board members: Ann Baldwin, Lurie Sprague-Palino, Gwen Purcell, Beth Renyi, and Treasurer Helen Telfer. He also recognized Wade, who will take over his position as board chair.

“We were extremely pleased with the turnout,” Hamblett said of the packed event.