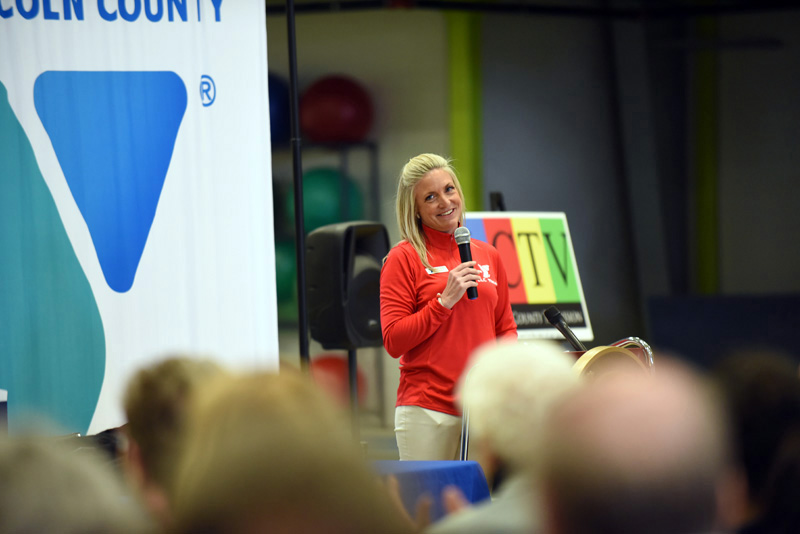 Meagan Hamblett, CEO of the Central Lincoln County YMCA since November 2014, will depart Jan. 31 to start a new position as executive director of the YMCA Alliances of Maine and New Hampshire/Vermont.

Hamblett said she has wanted the job with the alliances throughout her nearly 28 years working with the YMCA organization in various roles.

Hamblett’s new role will include consulting and facilitating on behalf of 27 YMCAs in the three states to strengthen those organizations and the communities they serve.  Projects will include strategic planning, financial and fund development, capital planning, board development and governance, collaborations and partnerships, CEO searches, and shared services.

“I get to take everything I’ve learned at CLC, and I’ve been with the YMCA organization for 28 years, and get to share all of that with all the other Ys in Maine, New Hampshire, and Vermont,” Hamblett said.

“It is bittersweet for me to accept the offer and, therefore, resign as CEO of the Central Lincoln County YMCA, as the past five years at CLC have been nothing short of fabulous and truly rewarding,” Hamblett said in a statement. “They have been some of my favorite throughout my 25-plus-year career within the YMCA organization. Working with community leaders and dedicated, passionate staff, volunteers, and donors is what has brought our CLC YMCA to a whole new level.”

The CLC YMCA Board of Directors met Jan. 3 with Hamblett and Kellie Wardman, current executive director of the YMCA Alliances of Maine and New Hampshire/Vermont, to discuss a transition plan for the CLC YMCA.

“With Meagan’s recent announcement, we will have some work to do,” CLC YMCA Chief Volunteer Officer Cindy Wade said in a statement. “While change can be challenging, we are all very proud of Meagan and, although we will miss her, we understand that this is the right path for her.”

CLC YMCA has seen many changes during Hamblett’s tenure, including a major expansion and renovation of its Damariscotta facility and more collaboration with, among others, LincolnHealth, Twin Villages Foodbank Farm, Spectrum Generations, and the Boothbay Region YMCA.

“I’m also really proud of the collaborations and the partnerships. We’ve opened a lot of doors. We’re not doing anything anymore in a silo. We work with others to make a greater, healthier impact. And that’s really what I’m most proud about,” Hamblett said.

Hamblett said one of the challenges during her time at the CLC YMCA was educating community members about why a pool could not be built before other renovations occurred at the facility.

“When I got to the Y, the YMCA was trying to raise money for a pool, an aquatic facility, not taking into consideration the aging facility as it was and that we weren’t on town water or town septic, and all of the systems needed to be upgraded,” Hamblett said.

All those systems have been upgraded as part of the expansion that took place from 2017-2018.

The YMCA is now building an endowment to sustain the facility upgrades, according to Hamblett. The CLC YMCA website says that once it builds a fund to sustain the new upgrades and raises the necessary $7.5 million to build the aquatic facility, it will move forward with that expansion.

According to the website, the YMCA has $1.1 million in donations available that have been designated specifically for the construction of an aquatic facility.

Another challenge that Hamblett faced, as part of the CLC YMCA’s strategic plan, was working to repair fractured relationships and be more open and transparent in operations. She said this helped with another challenge: fundraising.

“Fundraising was a challenge, because if you don’t have the relationship, it’s pretty hard to fundraise. But through education, through communication, we were able to successfully fundraise,” Hamblett said.

As for the foreseeable future of the CLC YMCA, she said financial stability and sustainability are the board’s top priorities.

“What that means is building an endowment so that there’s always money set aside to be able to reinvest back into the YMCA,” Hamblett said.

She sees more partnerships and an increase in child care in the future, emphasizing that child care is a huge need in Lincoln County, despite the high average age here.

Hamblett said she will travel extensively in her new role, but will continue to reside locally in East Boothbay.