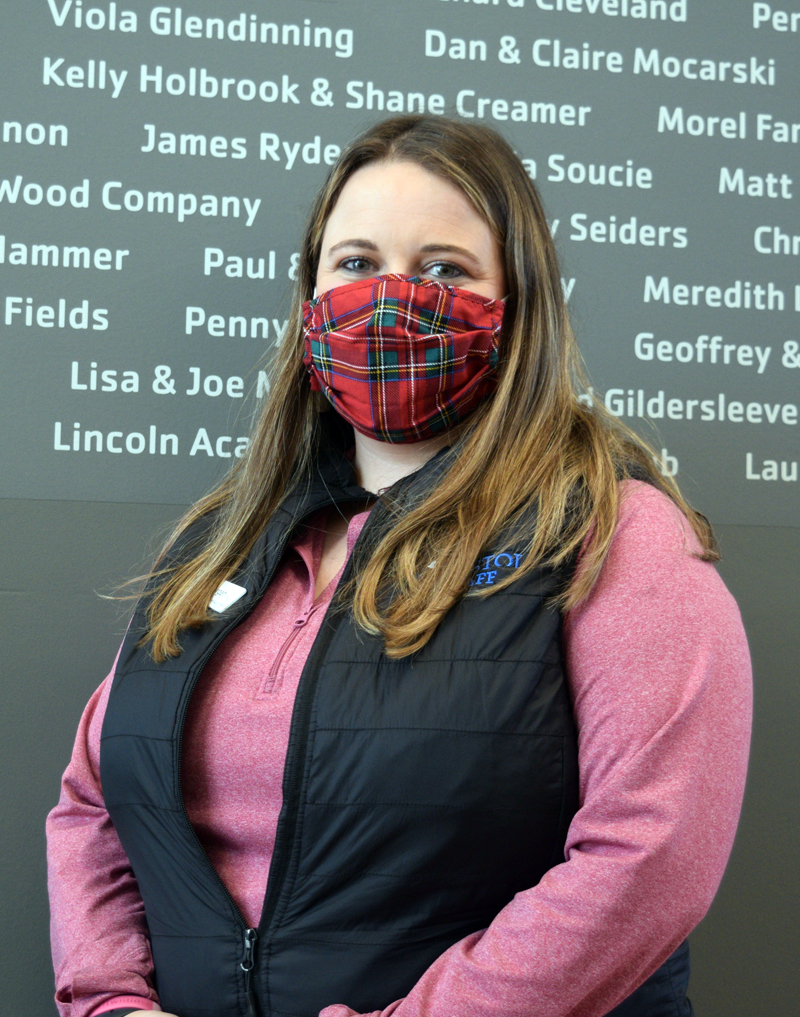 Morgan Perry was brought on as CLC YMCA’s programming director in November after beginning her career as an education technician at Bristol Consolidated School. (Nate Poole photo)

Perry accepted the position in mid-November following the exit of Joe Clark, who served in the position for over a decade. Born and raised in Damariscotta, Perry attended Great Salt Bay Community School and Lincoln Academy, where she served as the manager for the baseball and tennis teams.

Growing up in town, she has fond memories of participating in youth soccer, basketball, and competitive gymnastics at the YMCA, and she hopes to help create those same formative experiences for kids in her new role.

“I want to be with kids and help mold them to be the best person that they can be, not just the best athlete,” she said.

Perry earned a B.A. in sport management from Thomas College in Waterville, and afterward she began substitute teaching at Bristol Consolidated School, an opportunity which she parlayed into a full-time job as an education technician at the school for a few years.

Perry began working with the YMCA through its “Thrive at the Y” afterschool program at the beginning of the 2021-2022 school year. When the programming director position opened up, she immediately applied.

As the programming director, Perry oversees youth programs, Camp Knickerbocker summer camps, Y-Arts programs, gymnastics, and dog training. She also runs some sports programs like basketball and continues to help coach the jump rope team and club at BCS with her father.

“The people here are so supportive and kind and helpful, and I didn’t realize how much the Y did until really being in it, and that’s my goal working here, to promote all those things … all the different youth programs that we offer here that people don’t know about,” she said.

Sports were a key part of Perry’s upbringing. Her father, Chris Perry, was something of an athletic star at Lincoln Academy and he has been the physical education teacher and athletic director at BCS for around three decades. He was a four-year varsity athlete in high school and a wrestling state champion, and Perry inherited his passion for sports.

“My dad has always been one of my biggest inspirations. Everything he embodies, not just as a person and a father, but watching him coach for so many years and working with the kids at school for so long, I knew that’s what I wanted to do,” she said.

While Perry has loved her first month as program director, it’s not a position she anticipated being in when she was pursuing her degree.

She enjoyed statistics and writing press releases at Thomas and articles as a freelancer at The Lincoln County News, and she thought that she would pursue athletic administration and sports marketing in her career. However, her time at BCS helped her realize that she wanted to work with youth, too.

Perry loved her time at BCS and the staff and students she connected with there, but she always wanted to take on a job where she could exercise the sports management skills that she developed in college.

“I love sports, and being at Bristol made me realize how much I love working with kids and sports,” she said. “When this position came up, it was the best of both worlds.”

Perry learned a lot as an education technician, and she believes that it has not only improved her ability to work with children, but to communicate with anyone.

“Your tone of voice, the way you present yourself physically … being able to deescalate a child’s behavior or talk to them and get that personal relationship for them to feel comfortable; everything I did at Bristol has tremendously helped me in not just working here, but in life,” she said.

Currently, Perry is planning fun winter programs like indoor rock climbing at Camp Kieve and skiing and snowboarding at Camden Snow Bowl, and she is incorporating some of her passions that are not sports related to her new position. One of her goals this coming summer is to offer a Harry Potter specialty camp where campers can enjoy themed activities like Quidditch with healthy living lessons incorporated.

Still just a month into her new role, Perry doesn’t have any goals other than to perform her job to the best of her ability and help to mold children to be the best people and athletes that they can be.

“I love this organization, I love the people I work with, I love what I do,” she said.