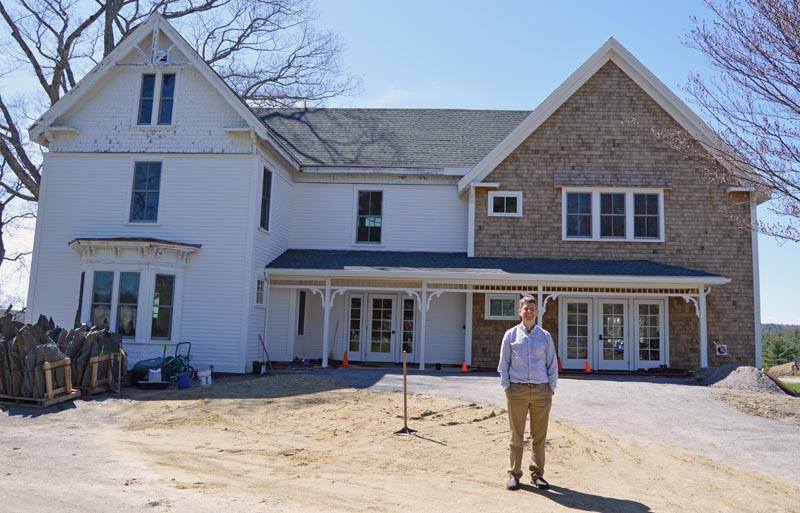 Coastal Rivers Conservation Trust moved into its new headquarters in a restored 131-year-old farmhouse at Round Top Farm on April 22.

Coastal Rivers Conservation Trust is the new organization formed by the unification of the Damariscotta River Association and the Pemaquid Watershed Association in February.

The DRA took over Round Top Farm from the Round Top Center for the Arts in 2008, according to Steven Hufnagel, executive director of the DRA and now Coastal Rivers Conservation Trust.

The DRA inherited Round Top Farm when the Round Top Center for the Arts ceased to exist, a stipulation mandated by Nancy Freeman.

Nancy Freeman inherited the property from relatives Edward W. and Dorothy Perkins Freeman, and she spearheaded the establishment of the arts center in 1997.

The property and its buildings brought millions of dollars in deferred maintenance.

“It was a big ask. We could have said no, but the community really asked that we say yes, because it is such a landmark,” he said.

The DRA felt it wise to hold off on the renovations until it knew exactly what was needed and had a plan for the future.

DRA began a campaign to raise money for improvements to the farm in 2016. The campaign raised over $3 million in 18 months from 240-250 donors, according to Hufnagel. By December 2017, the DRA was able to start work.

The first priority was to purchase land on either side of Round Top Farm, 5 acres to the north and 10 acres to the south, effectively doubling the area of the farm. The acquisitions were intended to preserve the land close to the Damariscotta River for future public and student enjoyment.

The acquisitions also allowed the DRA to build a handicapped-accessible trail to the nearby Whaleback Shell Midden State Historic Site. It then funded a crosswalk, complete with flashing lights, that allows students to cross over from Great Salt Bay Community School.

“The crosswalk was so important to the integrity of the project. This is a world-class shell midden right across from the school and they couldn’t get to it safely,” Hufnagel said.

The goal is to eventually build enough trails to link downtown Damariscotta with the old DRA headquarters on Belvedere Road by way of Round Top Farm.

The next step was to update what is now the main office building for Coastal Rivers Conservation Trust, the Rafter family farmhouse, built in 1888.

According to Hufnagel, an energy audit of the farmhouse determined that it would cost about $14,000 per year to maintain the temperature in the building. The exorbitant cost was due to all the cracks and holes in the building, which, when taken together, were equivalent in size to a truck.

Rather than hemorrhaging money year after year on heating and cooling costs, DRA leadership decided to undertake massive renovations in the building to increase energy efficiency. 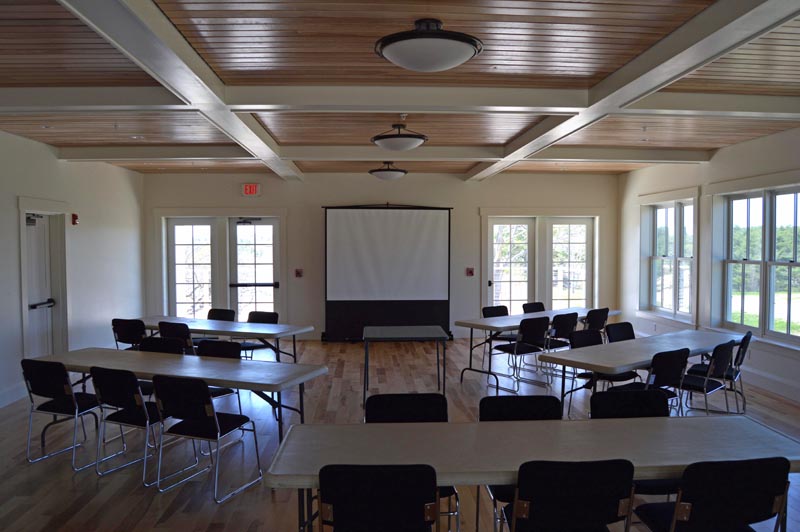 The David Moses Bridges Education Hall at Coastal Rivers Conservation Trust headquarters at Round Top Farm. All the wood in the hall is birch in honor of the late birch bark canoe craftsman. (Evan Houk photo)

An energy recovery ventilation system has been installed to heat and cool the building. The system works to use the energy from the air being cycled outside to warm or cool the air coming inside the building. This is able to save about 90% of the energy that would have to be used in a more traditional heating and cooling system.

No fossil fuels are used and the organization has plans to install solar panels on the property in the future.

The basement was insulated with spray foam, air-sealed, and a new slab and slab insulation was installed to prevent moisture damage. This also allowed for a safe and dry place to store the fire-proof safes that hold all of the organization’s land use records.

All the old foundations and chimneys were replaced with historically correct brick. Hufnagel said he could put his fingers through the brick; such was the foundation’s state of disrepair.

An attempt was made to renovate the “Oats Barn” attached to the main Rafter farmhouse, but it was too dilapidated to repair. Instead, a new wing was built that resembles the old Oats Barn.

Hufnagel said some visitors to the farmhouse do not even realize it is a new wing due to the historical accuracy of the interior and exterior rebuild.

The first floor of the building is also completely handicapped-accessible. The second floor will be once a planned elevator is installed.

Another new addition is a stewardship workshop in the basement of the farmhouse and purchase of stewardship tools and equipment, which will aid the nearly 200 volunteers the trust receives support from every year.

The trust relies on volunteers to test samples for water quality and maintain all the lands and preserves it owns or otherwise oversees.

Some unanticipated renovations to the former dairy barn, Darrows Barn, were also completed in the summer of 2018. Changes were made to protect the foundation, address major drainage issues, and make both floors handicapped-accessible.

The Darrows Barn now houses the Twin Villages Foodbank Farm storage and distribution center on the lower level. On the upper level is a performance space available for event rentals. There have been concerts, weddings, and proms there.

Perhaps the achievement Hufnagel is most proud of is the newly dubbed David Moses Bridges Education Hall, part of the new Oats Barn wing. The hall was funded by a family in the community who admired the late Bridges’ work in education and requested that the hall be named after him.

Bridges taught over 3,000 students during his seven years working with the DRA’s Wabanaki living skills and culture program. He died in 2017 at the age of 54.

Bridges was a master birch bark canoe craftsman. The education hall was built using birch wood in honor of Bridges and his beloved craft.

Although a long time coming, Hufnagel is grateful that the organization waited until it was able to make all the proper renovations and turn the farmhouse into a truly energy efficient and historically preserved landmark.

“We acquired (Round Top Farm) in 2008. We could have taken shortcuts. But this is a community landmark; it wouldn’t have been true to the history. I am glad we waited until we could do it right,” he said.