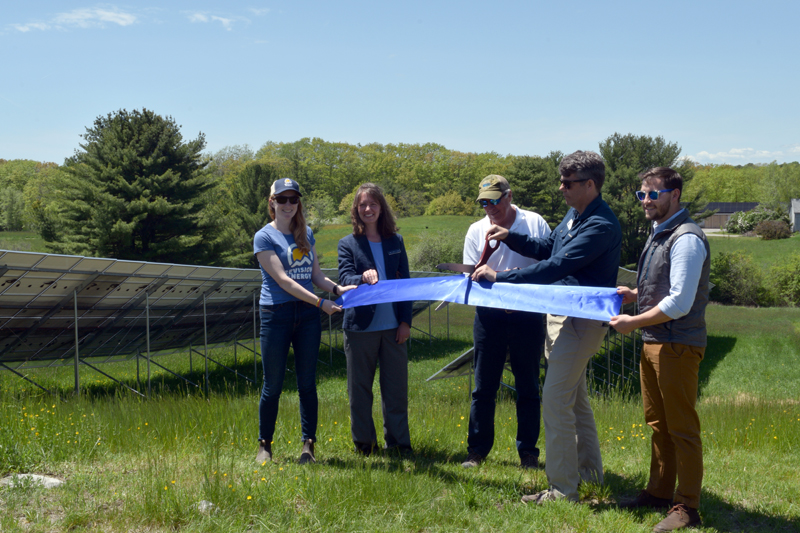 Coastal Rivers Conservation Trust cut the ribbon on its solar array, located behind the land trust’s headquarters at Round Top Farm in Damariscotta, on Wednesday, May 25.

Steven Hufnagel, executive director of Coastal Rivers, explained to the approximately 30 people in attendance at the event how the array started generating renewable electricity for Coastal Rivers and Kieve Wavus Education in February.

He said the bright sunny day reminded him about the quote that “when there’s a solar spill, it’s just called a nice day.”

Kieve Wavus Education is a nonprofit organization that has summer camps for children in Nobleboro and Jefferson on either side of the Damariscotta Lake.

The array is a partnership between the two organizations funded by investor Kiki Tidwell. There was no upfront cost for Maine-based ReVision Energy to install the 608-panel array.

Hufnagel praised ReVision Energy for its work in setting up the “turnkey operation.” He said that ReVision Energy is a benefit corporation, or B-corp, where employees own shares in the company.

Coastal Rivers and Kieve Wavus will own the panels after buying electricity for five years through a power purchase agreement.

“We will have ongoing power and with the help of our community to make that purchase, we’ll effectively have free power, which is better than any endowment in terms of return on investment,” Hufnagel said.

Hufnagel said the electricity is already a half-penny cheaper than the land trust was paying Central Maine Power Co. and the rate is fixed for more than 20 years at a “very low rate of growth.”

“We know that’s not what the trend has been in the broader electricity market,” Hufnagel said. 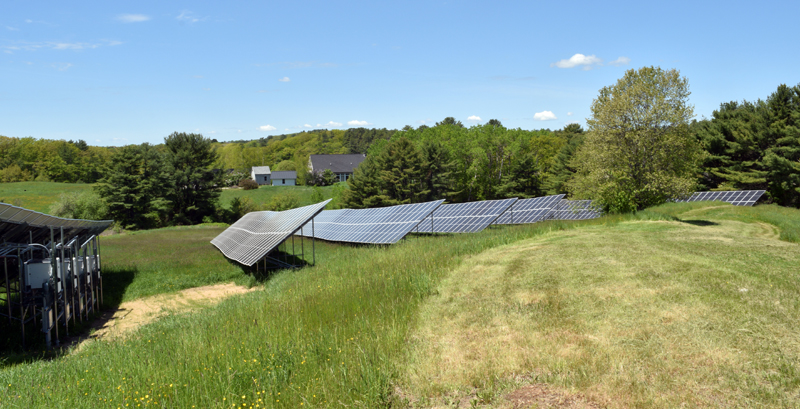 Coastal Rivers Conservation Trust’s solar array sits on a one-acre parcel behind the land trust’s headquarters at Round Top Farm in Damariscotta. The array will provide power for the land trust as well as Kieve Wavus Education. (Evan Houk photo)

He said the panels are expected to generate 300,000 kilowatt hours of electricity per year and should generate power for 45 years or so.

The solar array moves Coastal Rivers toward its ultimate goal of carbon neutrality by 2025, as laid out in its strategic plan. Carbon neutrality is defined by Merriam-Webster as “having or resulting in no net addition of carbon dioxide to the atmosphere.”

Coastal Rivers will also install an electric vehicle charging station at Round Top Farm and transition to electric vehicles and maintenance equipment in the coming years.

“We’re really excited to think about a future where all of our power comes locally,” Hufnagel said.

“It ended up being just a perfect partnership,” Kennedy said.

In the first five months of operation, the array has generated more than 103,000 kilowatt hours of power, Barbour said. She said the array is the equivalent of the amount of carbon sequestered by planting 2,298 trees.

“The climate crisis threatens all of us in Maine,” Crafts said.

According to the Maine Climate Council, climate models suggest that without action, Maine’s temperatures are currently on track to warm between two and four degrees by 2050 and possibly up to 10 degrees by 2100, Crafts said.

“This substantial increase catastrophically threatens our environment, our natural resources, and our way of life,” Crafts said. “Coastal communities like ours are particularly vulnerable.”