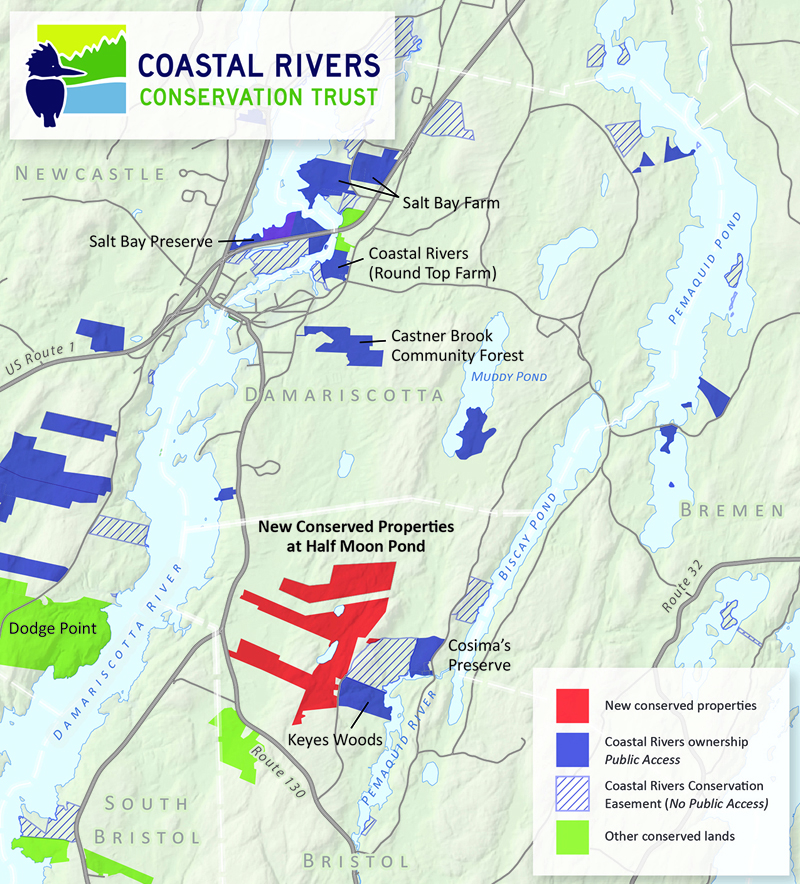 This week, Coastal Rivers Conservation Trust closed on a 476-acre piece of land next to the wild Half Moon Pond in Bristol, making it “the biggest single-day purchase in the history of Coastal Rivers and our parent organizations (Damariscotta River Association and Pemaquid Watershed Association),” according to Coastal Rivers Executive Director Steven Hufnagel.

He said the newly purchased land is about the size of the original Dodge Point preserve in Edgecomb, which was purchased by the State of Maine, but through support of the Damariscotta River Association.

“The newly-conserved properties are so important for wildlife and water quality, with the water that falls on part of the land flowing to the Damariscotta River and part to the Pemaquid River,” making the area symbolically, as well as ecologically important, wrote Hufnagel in an email.

A newsletter from the town of Bristol remarks that Coastal Rivers “has taken a major step forward in preserving the important watershed and wildlife corridor between Route 130 and the Benner Road, at the north end of Bristol.”

The newly preserved area “is adjacent to another 230-plus acres of land along the Pemaquid River that is already in conservation with Coastal Rivers, for a total conserved area of over 700 acres, spanning from the Bristol Road and that big wetland you can see behind Hanley’s Market, across the Poor Farm Road, and all the way to the Benner Road. It builds on neighboring Keyes Woods, where we just completed a new trail last fall. This is prime wildlife habitat, particularly for larger animals like moose, along with birds, all of which benefit from the large connected acreage,” wrote Hufnagel.

“I bought the first piece of that land around Half Moon Pond back in the early ’70s. I’m glad I kept the land all these years and got to enjoy it and share it with the neighbors, and I’m happy with the outcome of the sale to Coastal Rivers. I hope the land continues to be shared and utilized,” said owner Norman Hunt.

Coastal Rivers purchased the parcel from Hunt and his son Robert Hunt, with support from George and Elaine Keyes, Henry Keyes, North American Wetlands Conservation Act funding due to the area’s birds, and Maine Natural Resource Conservation Program funding administered by The Nature Conservancy due to the area’s wetland habitat.

Maine Coast Heritage Trust also “played a vital role in this purchase,” according to Hufnagel.

“For me Keyes Woods with its trails featuring the Hemlock Brook ravine, the river shoreline and the wooded delta offers a truly meditative experience and, for my brother Henry and myself, Keyes Woods is our legacy to a part of the world that we both deeply love,” wrote George Keyes.

Keyes, a Waldoboro resident, referred to the Pemaquid Peninsula as a “unique micro-climate within the wider region because of the Pemaquid River and its series of ponds and lakes that run down the spine of the peninsula which, itself, juts into the Gulf of Maine.”

This creates a critical environment, he said, that influences plants and animals in the region.

One governing reason behind the new additions was “to protect the entire watershed of Hemlock Brook that forms such a dramatic ravine in the original Keyes Woods property,” wrote Keyes.

Henry Keyes, George’s brother, called the purchase “a once in a generation opportunity for conservation on the Pemaquid Peninsula,” adding that “George and (George’s wife) Elaine were the “inspiring angels behind my participation,” in reference to the original Keyes Woods property and the new additions to Keyes Woods around Half Moon Pond.

Casey and Brian Goding, who run the local Launch Ramp kayaking company, expressed their thanks in the following statement: “Thank you for acquiring these beautiful and special acres. Now we know without a doubt our children will get to grow up here, exploring and learning with nature surrounding them.”

“Keeping the land open to the public and keeping both rivers clean is vital economically as well, as clean water is a foundation of our oyster industry, clamming, and fishing, not to mention a core attraction for paddling, boating, hunting, fishing, hiking, snowmobiling, all key parts of our community’s love of the outdoors, and what so many of us value about living where we do,” Hufnagel said. “Of course it’s also about functioning forests, storing carbon, filtering water, and potentially providing timber as well as places for wildlife to thrive.”

Hufnagel said, “Special core areas around the ponds will remain relatively unaltered – managed for their wild character – while other areas will also be thoughtfully managed for other purposes,” including timber, recreation, and a strong focus on education.

Coastal Rivers has contacted neighbors of the property and the local snowmobile club, hoping to meet with them to discuss current land use and how to accommodate those uses while protecting water quality and wildlife.