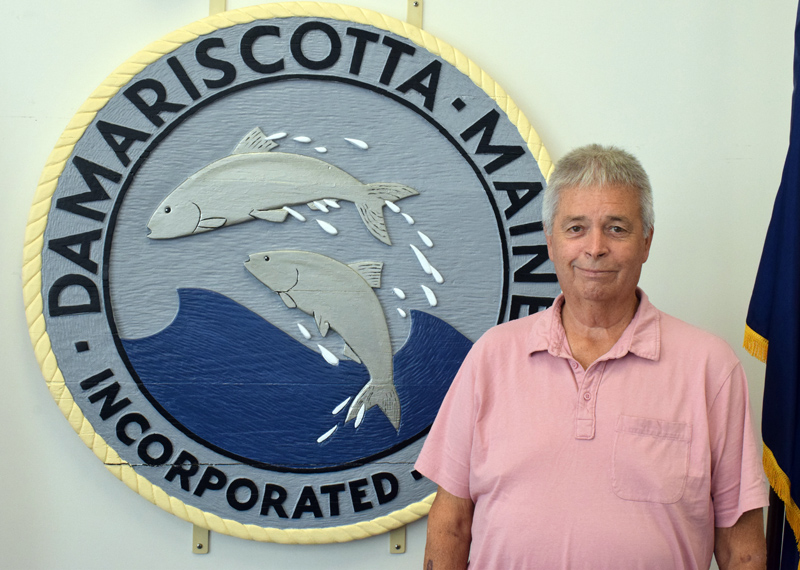 Code Enforcement Officer Stanley “Stan” Waltz stands in front of the Damariscotta town seal in the town hall on Friday, Sept. 24. Waltz is stepping back from his position in Damariscotta and Bremen, but will continue to work full-time for Waldoboro and Nobleboro. (Evan Houk photo)

Stanley “Stan” Waltz has been working in the code enforcement business for the past 18 years for 11 towns in Lincoln County.

“A lot of people know me,” Waltz said.

Waltz stepped down from his code enforcement officer position in Damariscotta and Bremen at the end of September, but will continue to work full-time for Waldoboro and his hometown of Nobleboro.

“My doctor told me I had to cut down on stress,” Waltz said during an interview at the Damariscotta town office on Friday, Sept. 24.

Prior to this, Waltz was working between 50 and 60 hours per week.

Waltz said that during a typical day on the job, he fields a lot of phone calls and helps in neighbor disputes, which he said are more numerous than one would think.

“They want you to solve all their problems. It could be anything from their neighbor’s chickens to anything,” he said.

Waltz’s thoughtful approach, wealth of knowledge and experience, and mild-mannered personality seem to make him a good fit for handling the sometimes tricky work of code enforcement.

“It’s going to be hard to replace him,” said Damariscotta Town Manager Matt Lutkus by phone. “He has a great personality for this kind of work.”

At one point in the late 2000s, during the Great Recession, Waltz worked as the code enforcement officer for nine towns in Lincoln County, but he said there was “nothing happening.”

“Nine towns together wouldn’t have the amount of permits of just Waldoboro now,” Waltz said.

Other aspects of code enforcement include building inspections and site visits, often helping to measure setbacks, especially from the water, Waltz said.

He can cite violations, but does not have the final authority to levy fines against someone who isn’t complying with the state or town ordinances.

“I don’t have the authority to fine somebody. It has to go through the selectmen,” Waltz said.

He has been to court twice in his capacity as code enforcement officer.

Bremen had to take someone to court over a bad septic system in a house that the individual was renting out.

The home owner had to pay $35,000 in fines and court fees because he perjured himself in front of the judge while acting in the capacity to defend himself.

Waldoboro takes up more time because it falls under the Maine Uniform Energy and Building Code because it has a population over 4,000. Towns with populations under 4,000 are not required to follow the uniform code.

Under the state uniform code, Waltz has to inspect buildings at different stages of the process to make sure the construction conforms.

Waltz mentioned the American Unagi building in Waldoboro that is currently under construction, with its unique aquaculture system to grow elvers, as a project that keeps his job interesting.

Waltz was drawn into the code enforcement business when he was serving as selectman for Nobleboro.

Nobleboro’s code enforcement officer at the time, Ken Morang, suggested he study to take the tests to become certified so he could take Morang’s place.

Morang died of a massive heart attack only nine hours after First Selectman Richard “Dick” Spear told him Waltz would be studying under him for a year to eventually take his place.

“I got fast-tracked,” Waltz said.

Waltz said a major focus of code enforcement is plumbing. He said one thing many people don’t realize is that any building permit must include a septic design.

Waltz was born and raised in Nobleboro. He was drafted in the fall of 1972 and decided to join the U.S. Navy.

“I got the draft notice and I decided to go over there instead of crawling around in mud puddles with snakes and stuff,” Waltz said.

There, he worked as a machinist in the engine room.

When he returned, he received an associate degree in business and accounting and worked for the Cedar Program for a time, doing all the paperwork for Lincoln County tax assessments.

Waltz eventually became involved in painting, carpentry, and construction—experience that would serve him well as a code enforcement officer.

He said he helped to build the first brick restroom in Lincoln County at the Sherman Lake rest area on Route 1 in Edgecomb in 1979-80.

Waltz served as chair of Nobleboro’s planning board in the mid-1980s, gaining more practical experience.

“I wanted to get involved in town stuff,” Waltz said.

He helped to write bylaws for the board and draft a tower ordinance because a cell tower was being proposed in the town.

Although he is stepping back from his duties in two towns, Waltz is continuing to keep busy and stay involved. He is currently volunteering on Nobleboro’s comprehensive plan committee to help rewrite the plan. The committee has had 35 meetings thus far.

Waltz said that what kept him working in the code enforcement field has been always learning new things, meeting new people, and being able to work in the field part of the time.