Lobster boats at their moorings near the South Bristol Fishermen’s Co-op on Aug. 29. The co-op’s numbers are down this year due to a late molt and a slow start, says co-op President Tim Alley. (Evan Houk photo)

A cold, wet spring and a late molt, or shed, appear to have contributed to a reduction in lobster landings so far this year in Lincoln County.

South Bristol Fishermen’s Co-op President Tim Alley said the co-op’s numbers are down so far in 2019, although he doesn’t know how much.

Kathleen Reardon, lead lobster scientist for the Maine Department of Marine Resources, said in an email that, from “anecdotal info filtering through the industry, the South Bristol Co-op experience is similar to other areas.”

However, DMR landings numbers are not available yet. The DMR usually releases the information in February or March of the following year, when it has compiled all the data.

Alley said he thinks snowmelt and cold freshwater from the coastline could have delayed the molt, since lobsters like to migrate close to shore after they shed.

“Lobsters don’t like fresh water,” Alley said in an interview at the co-op Aug. 29.

The slow start has not been universal, however, even in South Bristol.

About 10 miles north of the co-op, up the Damariscotta River, self-proclaimed “hobby lobsterman” Chester Rice said he is having particularly good luck this year.

Rice has 200 traps in the river. He casts off from Hunter’s Landing, a town landing in Walpole, to check the traps for lobsters. He motors out most days, always with his neighbor and loyal sternman, Robert Oberlander.

For a time in early spring, Rice and Oberlander had the largest catch of anyone in the co-op, including a few 400-pound days.

“We enjoy our time. Some days, we went to the co-op, and here’s two 80-year-old guys who caught the most lobsters of any guy this week,” Rice said in an interview during a two-hour excursion on his lobster boat.

Rice said he thinks cold water from the lakes could be pushing the lobster upriver.

Whatever the reason, the lobsters are definitely on the move.

“Up until about five years ago, you knew right where to go to find the lobsters,” Alley said. “You could set your watch to it – on July 4, the lobsters would shed and we would haul them in.”

Rick Wahle, director of the University of Maine’s Lobster Institute, agreed, saying there is usually a glut of lobsters around July 4.

This year, the lobster molt did not begin until early August, a month later than usual, deflating the co-op’s numbers for the start of the season.

Alley and the rest of the approximately 35 lobstermen at the South Bristol co-op are hoping for a second molt and a big jump in landings to make up for the slow start to the season.

Alley said they need three to four months of optimal fishing to make up their numbers for the year. 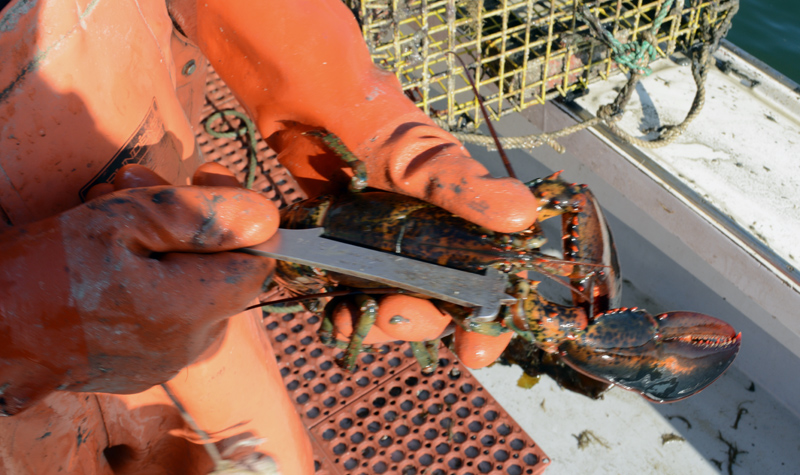 Wahle said that is possible, as there is often a second molt and a big lobster run in the fall. He did not want to draw any hasty conclusions about the health of the lobster industry, stressing that the season is far from over.

The time following the molt is usually the most productive for Maine lobstermen, according to Alley, because the lobsters are hungry and need nutrients to grow after they abandon their old shell.

The voracious “soft shells,” as the freshly molted lobsters are known, are more likely to take the lobstermen’s bait and become trapped in one of the wire-mesh cages resting on the ocean floor.

A lobster’s body must measure between 3 1/4 and 5 inches from the extreme rear of the eye socket to the end of the carapace (the upper section of the exoskeleton) to be a legal catch, or a “keeper,” according to the DMR. Lobstermen face stiff penalties for violations, starting with a minimum fine of $500.

Wahle said it is hard to determine the reason for the potential slowdown. He said it could be because of the cooler water temperatures this year, the late molt, a general decline in recruitment – the number of new lobsters entering a population at a specific age or size – or a combination of any of those factors.

Alley said that over the past 15 years or so, as the Gulf of Maine has warmed, lobsters have migrated farther and farther out to sea, seeking colder water.

“The weather is much more volatile now,” Alley said.

According to a September 2018 report from NASA’s Earth Observatory, over the past 15 years, the Gulf of Maine has been warming faster than 99% of the world’s oceans.

NASA cites two main causes for this unprecedented warming: “First is the overall warming of the global ocean as air temperatures and greenhouse gas concentrations rise. Second is the melting of ice in Greenland and the Arctic Ocean, which provides pulses of fresh water that can alter ocean circulation patterns in the region.”

Rice, the hobby lobsterman up the river, said he has seen the effects of warming waters.

This warming trend has led to an industry much more unpredictable than it has been for most of Alley’s life.

Alley has been involved in the lobster industry since he was 9 years old, when he started fishing with his father, who founded the South Bristol Fishermen’s Co-op in 1972.

Alley said the lobstermen have to “listen to the lobster” now to know where to set traps, since they are no longer found in the spots where they traditionally have been.

Alley said the temperature of surface water and the water on the ocean floor can differ by 20 degrees or more sometimes. He has a buoy thermometer set up along the sea route to Monhegan Island that measures the deep-water temperature off the coast.

The lobster industry in Maine, which accounts for 80% of landings in the nation’s most valuable single-species fishery, saw its second-highest total catch on record last year, 119.6 million pounds, with a value of $484.5 million, according to the DMR.

But there are some signs the boom will not last.

An article on the Atlantic States Marine Fisheries Commission’s website says that “since 2012, there have been consistent declines in the young-of-year surveys” in the Gulf of Maine and Georges Bank lobster stocks, which could foreshadow a decline in future recruitment and landings off the coast of Maine.

Wahle has collected similar data. He runs the Wahle Lab, which has been tracking lobster population trends for its American Lobster Settlement Index since 1989.

He said his research into lobster larval transport, which involves the effect of ocean currents on the movement of planktonic larvae along the coast, indicates a declining trend in new lobster settlement over the past seven or eight years. 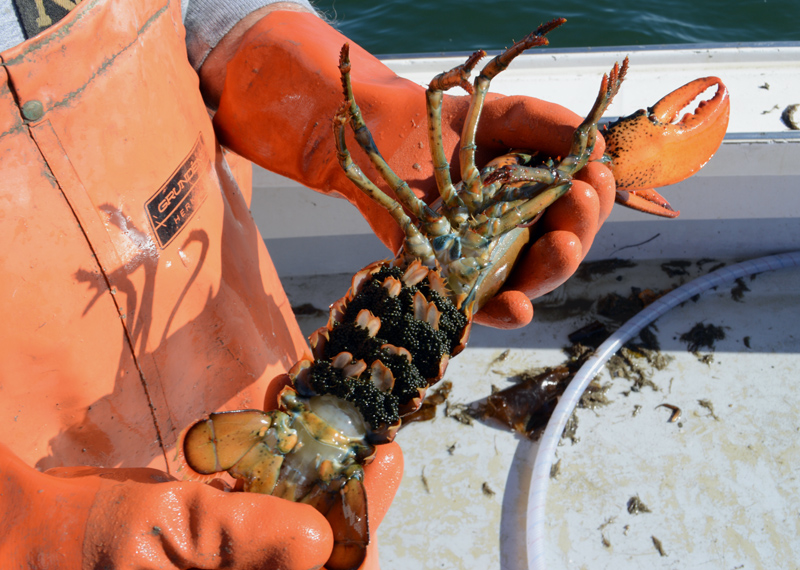 Chester Rice displays an egg-bearing female lobster. The lobster has been marked with a “v-notch,” an important conservation practice in Maine that marks a lobster as a known “breeder” that cannot be harvested. (Evan Houk photo)

According to Wahle, settlement is the transition of the lobster from the planktonic larval stage to the bottom-dwelling juvenile stage. His American Lobster Settlement Index is a “relative measure of the numbers of babies repopulating coastal nurseries each year,” he said in an email.

Alley is optimistic, however, citing the historical ability of lobstermen to adapt to changing circumstances and thrive.

Wahle applauded the conservation efforts of lobstermen and the DMR over the years, citing the v-notch law as a prime example.

Since 1948, fishermen have been protecting known breeding females by marking a v-notch in their right center tail fin. Today, there are stiff penalties for possessing a v-notched lobster, starting at $500 for each violation.

Out on the water with Rice, he caught an egg-bearing, v-notched lobster and pointed out the hundreds of tiny eggs on the lobster’s underside before promptly returning it to the water.

The day-to-day work of lobstering seems relatively simple. That is not to say it is easy. On the contrary, it looks like a physically demanding and monotonous process, and one that would be much more challenging in the dead cold of a Maine winter.

Rice motors out to one of his green-and-white-striped buoys, hooks the attached rope with his gaffer’s stick, and hauls up the roughly 40-pound lobster trap with the hydraulic winch on his boat, dubbed the Nancy Katherine in honor of his wife.

He then checks the trap, clears it of any unwanted gunk, like sea squirts or any species other than lobster, and baits it with a hanging bag of menhaden, also known as pogies, or pigskin.

Rice said many lobstermen look down on using pigskin as bait, but he thinks it works just fine.

Finding bait was another challenge for lobstermen this year, due to a drastically lower quota for the herring catch. The New England Fishery Management Council set the 2019 herring quota at 32.1 million pounds, about 78 million pounds less than last year’s quota, according to the Portland Press Herald.

The state reopened the pogy fishery and increased the quota in July after finding the fish were still abundant in Maine waters, helping to increase the supply of affordable bait for lobstermen.

Alley, president of the South Bristol Fishermen’s Co-op, said that if it wasn’t for pogies being more available this year, the lobstermen might have had a bait shortage or very high bait prices.

After baiting a trap, Rice searches for the right spot to place the trap and drops it back into the water to sink to the floor of the riverbed as the boat knifes through the water.

Most commercial lobstermen repeat this process upward of 300 times a day.

During the two hours on Rice’s boat, he hauled in four “keepers,” along with numerous green crabs and horseshoe crabs.

The green crabs he promptly smashed on one of the bricks used to weigh down lobster traps.

“They’re the enemy of the clam,” Rice said, describing the predatory nature of the invasive species.

Horseshoe crabs, on the other hand, are not as abundant in Maine as they are further south. He gently tossed each horseshoe crab he found back into the water.

Taking Alley’s and Rice’s experiences together, two things are clear: the waters around and off the coast of Maine are warming, and the lobsters are on the move.

In order for this valuable fishery to continue to thrive, the lobstermen will have to adapt and “listen to the lobster,” as Alley advises.