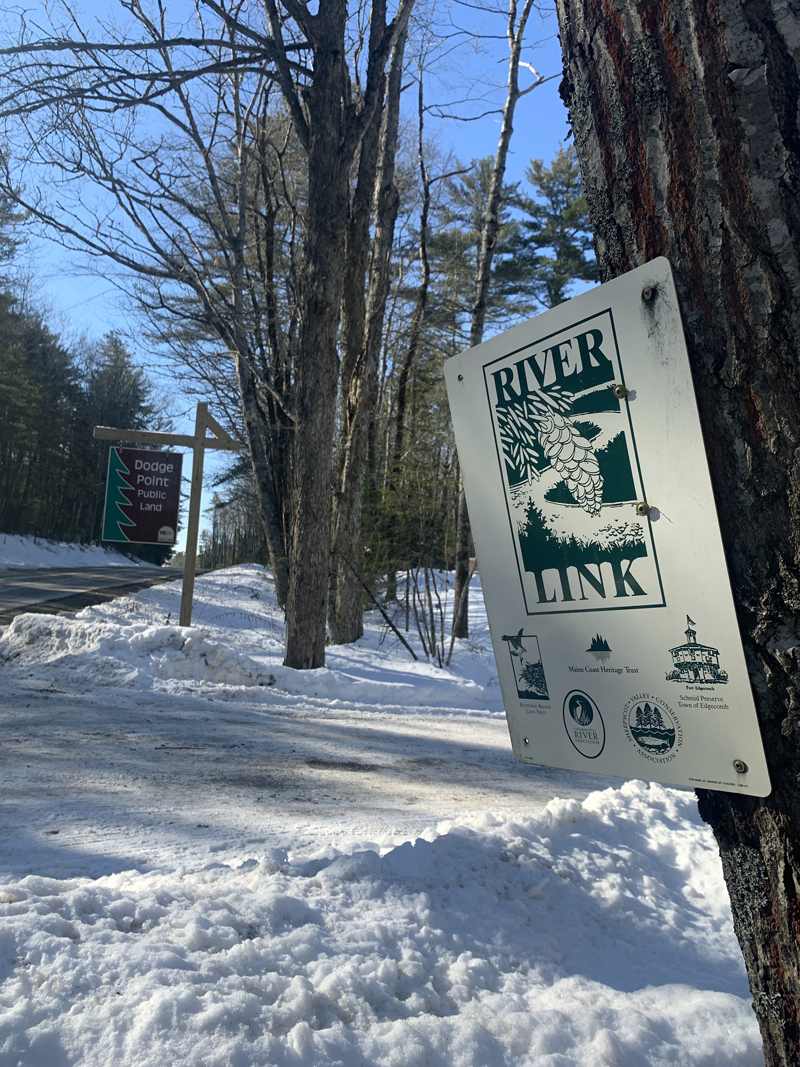 To travel from the Dodge Point Preserve on River Road to the Zak Preserve in the middle of McKay Road in Edgecomb by car, it would take approximately eight minutes. On either side of the road, buildings interspersed by forest, roads leading down to oyster farms on the Damariscotta River.

But moose and other wildlife – who inhabited the Boothbay peninsula long before colonial development – can’t travel by road. And they certainly can’t live on one.

“Just like we wouldn’t want to live in a hallway, a narrow little strip of land is not a happy place for a moose,” said Coastal Rivers Conservation Trust Executive Director Steven Hufnagel.

“They can handle it,” he said, “You can get from place to place (on) something that’s narrower, maybe 600-feet or 1,000-feet wide. But narrower than that? It’s really running the gauntlet for them. They don’t feel comfortable. They’re not going to be calm, able to succeed. You don’t want to live in a house that’s all hallways.”

At the Dodge Point Preserve, the start of the River~Link trail, snow gathers on spruce boughs and puckers on the ground with human and animal footfalls. A trail is marked by small signs bearing the River~Link logo.

“The connecting trail system from Zak to Dodge Point is over 7 miles long and that doesn’t include the trail systems at each of the terminal points,” said Christine Selman, communications and outreach manager at Boothbay Regional Land Trust (BRLT), which has primarily been involved in developing the connections between River~Link in the towns of Edgecomb and Boothbay.

“This provides incredible versatility that is pretty unique in our region where so much of the land is developed and there aren’t so many vast tracts of wilderness,” she said.

Along with Coastal Rivers, BRLT and the Midcoast Conservancy are also working closely on maintaining the project, added Selman. But there are others involved, too.

“Having the support of the Schmid Preserve volunteers, as well as neighboring land trusts has been helpful in establishing the trail, developing maps, etc.” she said. “Projects like this provide value to the larger communities that extend from Boothbay to Newcastle and it’s great to see how, working together, we’re able to create something that none of us could have done as an individual entity.”

River~Link, funded in large part by the Land for Maine’s Future program, was first conceived around 30 years ago.

“The thought was: Here we have this fairly developed peninsula on the periphery, but the middle is still full of moose and bob cats and bear and coyotes,” Hufnagel said. “A whole host of animals that you typically would see only farther north. But we have two wild peninsulas, the Boothbay peninsula and the Pemaquid. And so you got this big block of untrammeled land, that was a big enough scale, if it were to be protected, to be an important home for all these animals.” 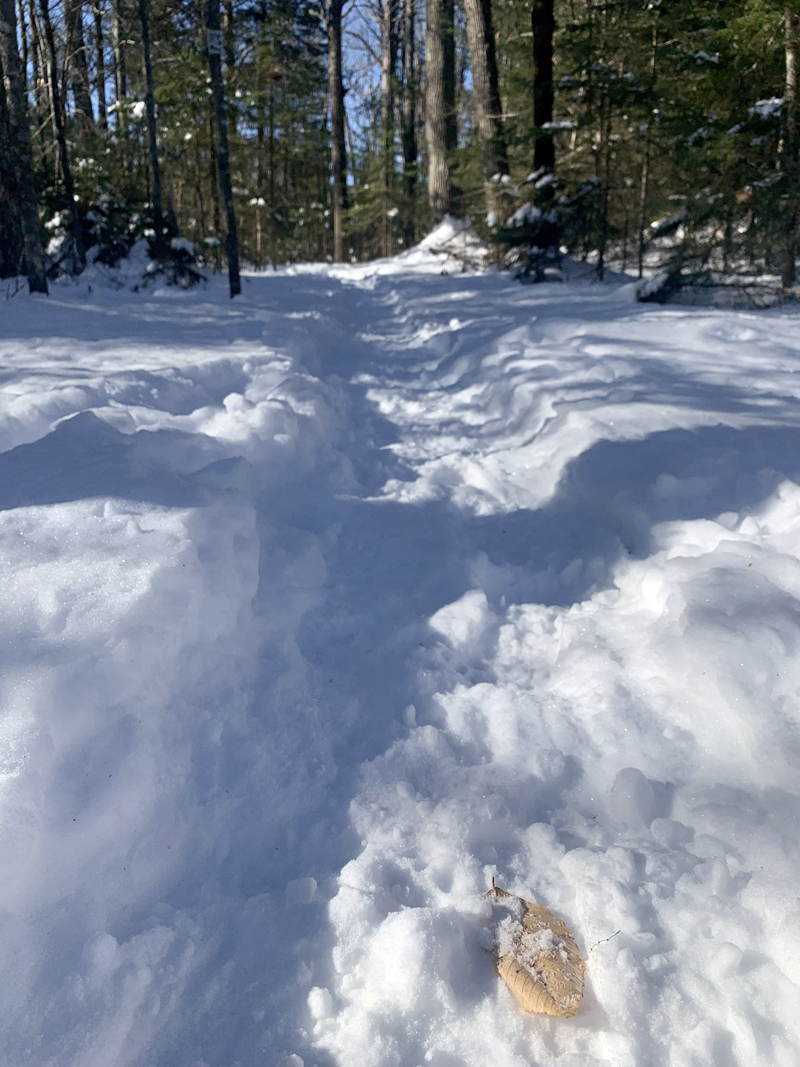 The River~Link trail, like the other contiguous habitat conservation efforts underway, is not only for humans. The conservation lands should enable wildlife to thrive away from development. (Anna M. Drzewiecki photo)

Scouted by volunteers, the trail was connected – running from the Dodge Point Preserve down through the Schmidt Preserve to an outlet on McKay Road – in 2017.

The conservation area includes diverse topography and forest ecosystems, and space to protect the local mobility and migration of flora and fauna, according to Hufnagel, who displayed maps from a few years back as he spoke. One map of the area, from 2020, showed three parcels still under option.

“We closed on all three,” said Hufnagel.

The next scale out is the Twelve Rivers Collaborative, which works within an area of about 10,000 acres stretching from the Kennebec River to Penobscot Bay, with Unity at its northern limit. The collaborative is made up of land trusts and has been in progress for the past 10 years.

“We’re all coordinating our land conservation efforts to make sure we don’t build a road to nowhere,” said Hufnagel.

“River~link was sort of a testing ground on a smaller scale,” he said of the Twelve Rivers Project. It also served as an example of the organization’s recent land conservation strategies, which focus on continuity, protecting mobility, protecting water through protecting forests, and linking land for both human and wildlife transit, recreation, and overall well-being.

Coastal Rivers, a key leader in both projects, has also been putting this linked land and water conservation into action on another close-to-home peninsula: Pemaquid.

“What we’re doing is taking the River~Link concept that was on the Boothbay Peninsula, and now we’re applying that to the Pemaquid. And we’re in the midst of it, you can see the beginnings of it, the Castner Brook community forest, which is right here, we’re about to buy a piece in there. We’re closing on all of those,” said Hufnagel, pointing again to the map.

“We’ve been laying out the connections with the landowners,” he said. “It needs a good name. Very soon. The working title has been the Connect the Pemaquid Initiative.”

Hufnagel said the organization has met with community groups in Bristol to discuss extending a connection from Damariscotta down the peninsula for safe biking, providing a pathway for both transit and recreation. The contiguous land conservation effort would also do what it does for wildlife on its neighboring peninsula – some of whom commute easily by water or air between the two.

While Coastal Rivers is involved in other projects specific to human transit, these contiguous blocks of land are first and foremost habitat, space to thrive and grow in.

Hufnagel spoke across species, trying to embody scaled and feathered co-inhabitants. “If you’re a shy bird,” he said, “but you’re ground nesting, you don’t have house cats coming in eating you or your young. If you’re … an animal that hates any kind of activity, you don’t have a lot of things like lawnmowers coming by. So it’s really, it’s important to have these big blocks of land.

“If you’re a trout, you hate warm water,” he said. “So for all those who love to fish, and for just the health of the whole stream habitat in particular, hemlock forests play a role in keeping that cool.”

They are not the centerpiece – still, they serve a key role. And will do so at the next site on the Pemaquid peninsula, too.

“I think it helps people to feel the connectivity, I mean, to actually experience it,” said Hufnagel of the trails running through the conservation areas. “We’re trying to build a whole community that’s completely invested in the land. That understands the place, its history. Its natural history, its human history, how those two come together … Our whole local heritage around the outdoors is built on the ability to travel across the landscape unhindered.”