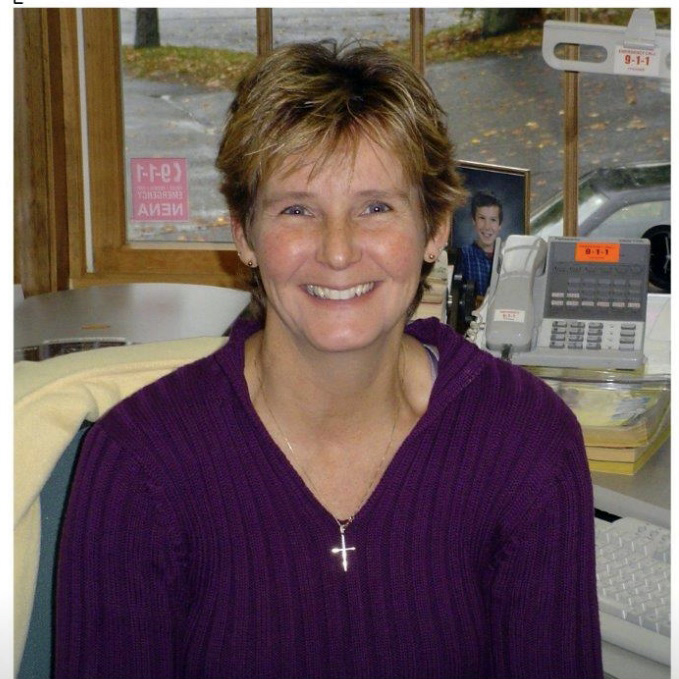 Kathy Blagdon at her desk, early in her 36-year career as an emergency dispatcher and supervisor with Lincoln County. Colleagues remember Blagdon as a dedicated and unflappable dispatcher. (Photo courtesy Becky Butler)

Colleagues and friends remember Kathy M. Sherman Blagdon as an exceptional emergency dispatcher with an intense dedication to her work throughout 36 years with Lincoln County, the last six with cancer.

Blagdon was born in Boothbay Harbor and graduated from Boothbay Region High School in 1975. She obtained an associate degree in criminal justice from the University of Maine in 1982.

She started her career with Lincoln County as a dispatcher and reserve deputy at the Lincoln County Sheriff’s Office in 1983. She also worked as a reserve officer with the Damariscotta Police Department.

Former LCSO Lt. Seth Blodgett worked with Blagdon for 17 years, until going to work at the Maine Attorney General’s Office in 2002. They became friends outside work and Blodgett got to know Blagdon’s family, then-husband John Blagdon III and sons John “Sean” Blagdon IV and Zackary Blagdon.

Kathy Blagdon was active and enjoyed outdoor activities like ice fishing, Blodgett said. She had been an athlete in elementary and high school.

Becky Butler, a close friend of Blagdon’s since they met around 25 years ago while Butler was working as a dispatcher for the county, said her friend loved flower gardening and hiking.

Blagdon was involved with the Law Enforcement Torch Run, which raises funds and public awareness of Special Olympics, Blodgett said.

Blodgett described Blagdon as a reserved person who did not like to be the center of attention. “She was dedicated to her sons as well as her job, and she had a very strong work ethic,” he said.

Blagdon was a Cub Scout leader while her sons were growing up and traveled with her sons to sports events, such as wrestling meets.

“She definitely loved her boys most of all. They were the most important thing in her life,” Butler said.

One of Blodgett’s favorite stories about his friendship with Blagdon is when she went into labor at work.

In December 1989, she was pregnant with Zackary.

“She used to kid me: ‘If I need to go to the hospital, you’re going to need to take me,’” Blodgett said.

Sure enough, the day Blagdon went into labor she was at work and could not reach her husband, who was on the job with the Maine Warden Service.

Instead, she called Blodgett. At the time, his office was upstairs in the sheriff’s office and hers was in the basement of the building. She asked what he was doing and said she would likely need a ride to the hospital.

He thought it best to call an ambulance, but Blagdon, who stayed calm the entire time, insisted they would make it in time.

“I went by the sheriff’s office. … I said, ‘Kathy’s apparently in labor and she needs to go to the hospital.’ My thought was that they would say, ‘No, no, no, let’s call an ambulance,’ and they said, ‘OK, let us know how it makes out.’”

His car was almost out of gas when they got in, and Blagdon wanted to go to a hospital in Brunswick.

“I was flying. I didn’t know if I was going to run out of gas, and I was thinking, well, if anyone tries to stop me, they’ll have to chase me,” Blodgett said.

As he remembers it, her son was born about 20 minutes after they arrived at the hospital.

The friends would joke about the trip afterward.

“’I’ll tell you right now,’” Blodgett would say to Blagdon, “’when my first child is born, I’m going to take (my wife) out to Damariscotta Lake, put her in a canoe, and shove her out to the lake, and call the Warden Service, so John would have to come.’”

“It didn’t happen that way,” he said.

In 1994, Blagdon was promoted to deputy director of Lincoln County Communications. She once served as interim director and was a supervisor at the time of her death.

“I think dispatchers, although it seems to be turning around, they are the forgotten people when it comes to public safety, which they should not be. They are on the phone with someone who is in crisis,” Blodgett said.

Blagdon was the dispatcher when LCSO Detective Sgt. Donald E. Davey died on the job in 1984. He was responding to a call on Route 1 in Nobleboro when a tractor-trailer crossed into his lane and ran over his cruiser.

The Lincoln County Board of Commissioners recognized Blagdon for her role in the response in September, as the county prepares to establish a memorial to law enforcement officers who have died in the line of duty.

“In those days, the dispatcher was not only dispatching, they were answering the phone, answering the radio, but also there (were) four or five cells, so they had to check on the jail,” Blodgett said.

Blagdon also answered the call when her father passed away in 1985, according to Butler.

She earned the distinction of Registered Public-Safety Leader from the Association of Public-Safety Communications Officials, making her the only one in Lincoln County and the second in the state.

Tom Nelson, director of the Lincoln County Communications Center, had worked with Blagdon since his hire in fall 2018.

“She was incredibly competent, tough as nails,” Nelson said. “She wholeheartedly loved her staff and co-workers.” She trained dozens of dispatchers who continue to work in the field.

“When they were trying out something new with the state, they would come to Lincoln County to try it, because they knew Kathy was the best and had the best group of people,” Butler said.

“She worked as long as she could, mostly because she loved her job. She took it very seriously,” Brackett said. “She wasn’t the kind of person to use sick time.”

One notable moment in Blagdon’s career was going down to help as a dispatcher for a month after Hurricane Katrina struck Louisiana in 2005.

Six years ago, Blagdon was diagnosed with multiple myeloma, a type of blood cancer.

Nelson said she worked until the last few months of her life.

“She never felt sorry for herself. She was always optimistic,” Blodgett said, recalling conversations they had while she was ill.

According to Butler, Blagdon was in and out of hospitals in the last few months. The night before she died, she was sitting up and speaking to her sons and Butler.

“She was still very brave. I always called her my warrior,” Butler said. “She was always fighting, and every time she had something done, the minute she felt good enough she’d go back to work.”

According to her obituary, if Blagdon had final words to share, they would be: “Love as if there is another day. Love you all.”