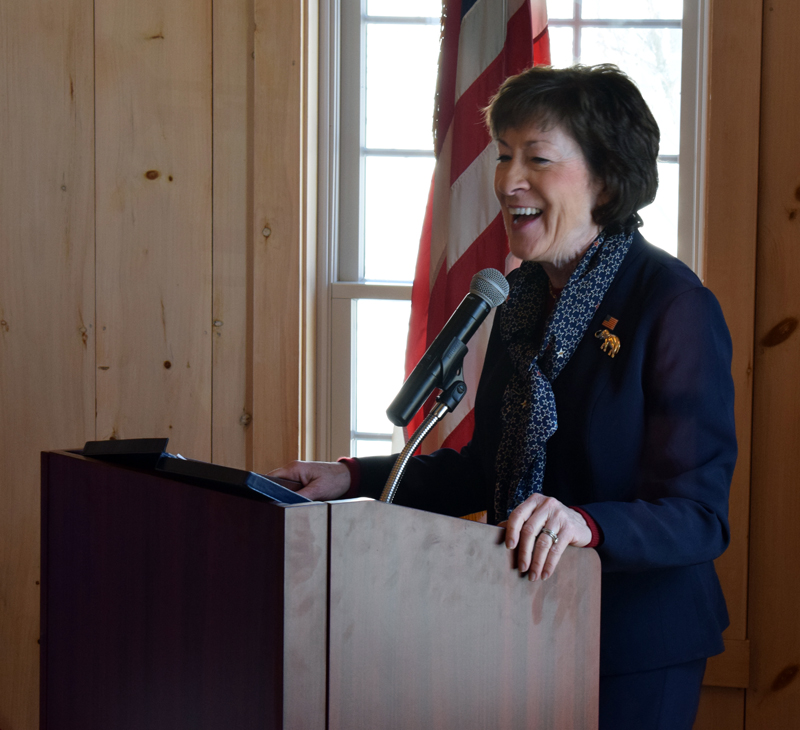 Others among the approximately 100 people at the $50-per-plate event were Dr. Jay Allen, candidate for the 1st Congressional District; state Sen. Dana Dow, minority leader of the Maine Senate; state Rep. Jeff Hanley, of Pittston; and former state Rep. Jeff Pierce, of Dresden, who is running to regain his seat this year.

After brunch, Allen led the Pledge of Allegiance. Dow provided the invocation before Collins was introduced.

Collins began her remarks by invoking the celebration of Abraham Lincoln and the history of the Republican Party.

“A significant chapter in the history of our party was written 160 years ago when Abraham Lincoln was elected president. On Nov. 6, 1860, the American people heard the better angels of their nature and put our troubled nation’s faith in the hands of a leader and a party dedicated to the principles of freedom, equality, and dignity for all,” Collins said.

Collins said that Dow, who was her guest in Washington, D.C. for Trump’s State of the Union address on Feb. 4, told her there is a strong group of candidates for state office this election cycle.

“My first challenge to you today is, let’s work together and take back the state Senate and the state House,” Collins said to rousing applause and cheers.

Collins said Lincoln County has “always been in her corner.”

She called for bipartisanship in federal government. 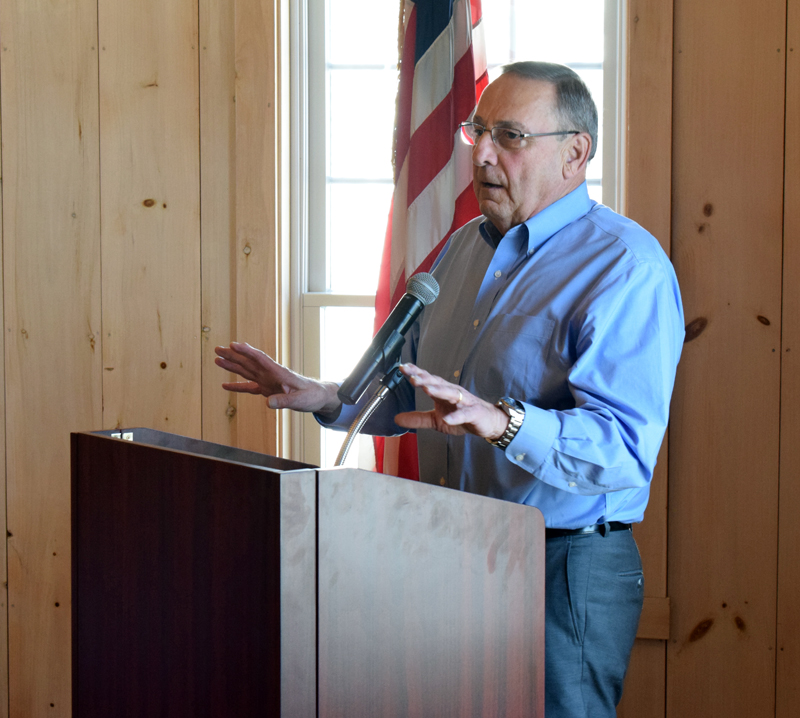 “People throughout Maine tell me that they’re tired of the vitriol and the divisiveness, and they want Washington to get back to work on the issues that matter,” Collins said.

On the question of impeachment, Collins defended her vote to acquit Trump, saying the evidence “did not meet the high standard in the Constitution for bribery, treason, high crimes, and misdemeanors,” in her opinion.

Of how to slow the growing federal budget deficit in relation to the gross domestic product, she called for bipartisan efforts and cuts to crop insurance and ethanol subsidies for farmers.

The federal budget deficit to GDP ratio is currently at 4.86%, according to usdebtclock.org.

LePage then took to the podium to deliver a free-flowing speech, mentioning a possible run for governor in 2022 and his accomplishments during his time as governor from 2011-2019.

“I understand there’s a reporter in the house. I would just ask that you photograph and take everything I say from the right side, because I’m not very good on the left,” LePage joked to laughter and applause.

LePage said Abraham Lincoln was the original inspiration for him to enter politics when he ran for Waterville City Council in 1998.

“He gave his life for this country,” LePage said. 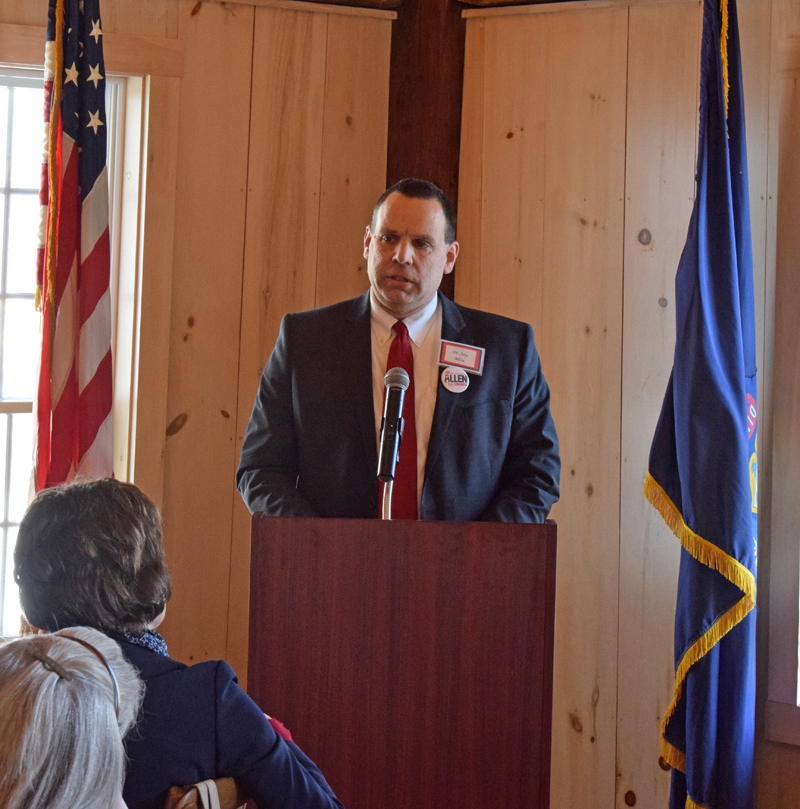 LePage said he is contemplating a run for governor in 2022, but will not run until his wife, Ann LePage, commits to the campaign.

“Because I can’t get elected without her,” LePage said.

LePage spoke on his endorsement for former state Rep. Dale Crafts in the 2nd Congressional District, “because I believe Bruce Poliquin had his election stolen,” he said to hums of approval.

Poliquin lost his bid for a third term to Democratic opponent Jared Golden in a 2018 ranked-choice vote. He challenged the ranked-choice method in federal court and forced a recount before conceding the election on Dec. 24, 2018.

LePage then began to decry the agenda and spending of Gov. Janet Mills and the Democrats currently in control of the Legislature.

He said he believes Maine would not need an income tax if nonprofit organizations and land trusts had to pay property taxes. 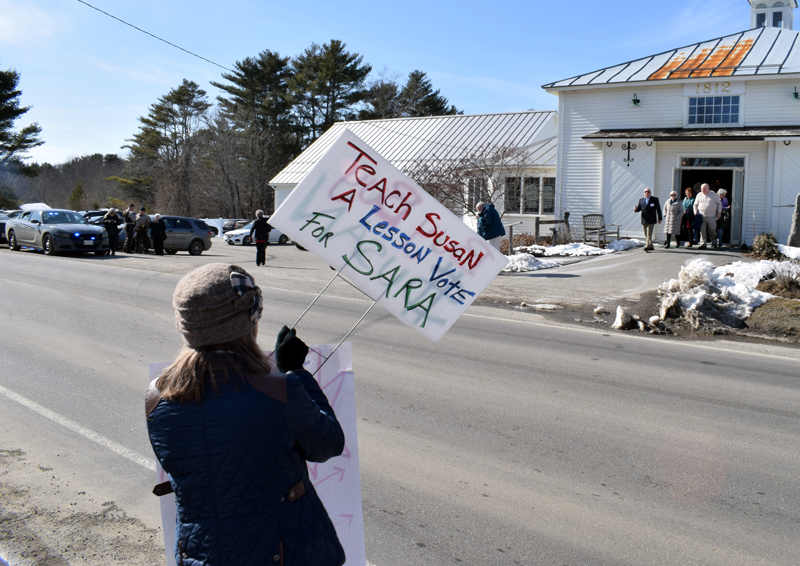 A protester yells to attendees as the exit the Lincoln County Republican Committee’s annual Lincoln Day event at The 1812 Farm in Bristol Mills on Saturday, Feb. 22. (Evan Houk photo)

LePage said he is working closely with Maine House and Senate leadership to recruit Republican candidates for state office.

“We really need to fight. … There’s a lot more people in this room than there is standing outside,” LePage said, in reference to a group of protesters.

Allen, of New Harbor, closed the speeches by talking about his campaign and what he sees at stake in the upcoming national elections.

“As an officer in the Army, I took an oath to support and defend the Constitution, and that oath never expires,” Allen said to applause.

Allen said he was spurred to run for Congress by the large spending promises of the Democratic presidential candidates during a debate last summer. 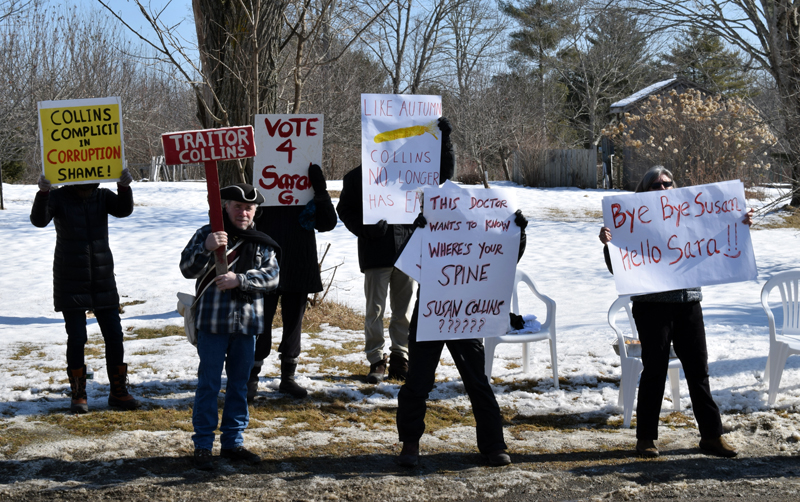 The brunch ended with a busy crowd waiting in line for a photo opportunity with Collins, LePage, and Allen.

Across Bristol Road from The 1812 Farm, protesters gathered at the start of the event. By the end, there were nine protesters outside chanting and holding signs expressing disapproval of Collins. Periodically throughout the brunch, horns of passing vehicles could be heard.

Matthew Gray, of Bristol, one of the protesters, said the group is upset with Collins for her votes on Kavanaugh’s confirmation and Trump’s acquittal.

During the event, Todd Maurer, co-owner of The 1812 Farm, provided scones and water to the protesters.

“That’s what makes this country great. Everyone has a right to voice their opinion,” Maurer said.