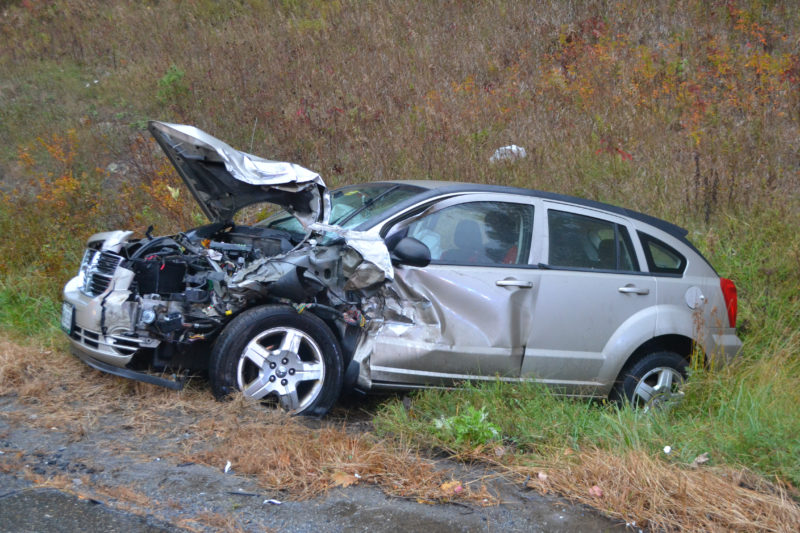 A Dodge Caliber was totaled in a two-vehicle accident on Route 1 in Newcastle near the Sherman Marsh rest area the afternoon of Tuesday, Oct. 18. (Maia Zewert photo)

A Dodge Caliber was totaled in a two-vehicle accident on Route 1 in Newcastle near the Sherman Marsh rest area the afternoon of Tuesday, Oct. 18, according to the Lincoln County Sheriff’s Office.

Corey Belcher, 43, was driving south on Route 1 in a pickup truck and stopped to turn left into the rest area, according to Lincoln County Sheriff’s Deputy 1st Class Brian Collamore.

Jackson’s vehicle rotated counterclockwise and ended up in the northbound ditch, Nein said. Belcher was able to drive his vehicle into the rest area. The accident was reported shortly after 4:30 p.m.

No charges are expected, Collamore said.

The Central Lincoln County Ambulance Service responded to the scene, but no one was taken to the hospital, Collamore said. Jackson reported minor injuries to her leg.

Both Jackson and Belcher were wearing their seat belts, and the airbags in Jackson’s vehicle deployed, Collamore said.

The Newcastle Fire Department provided traffic control at the scene.