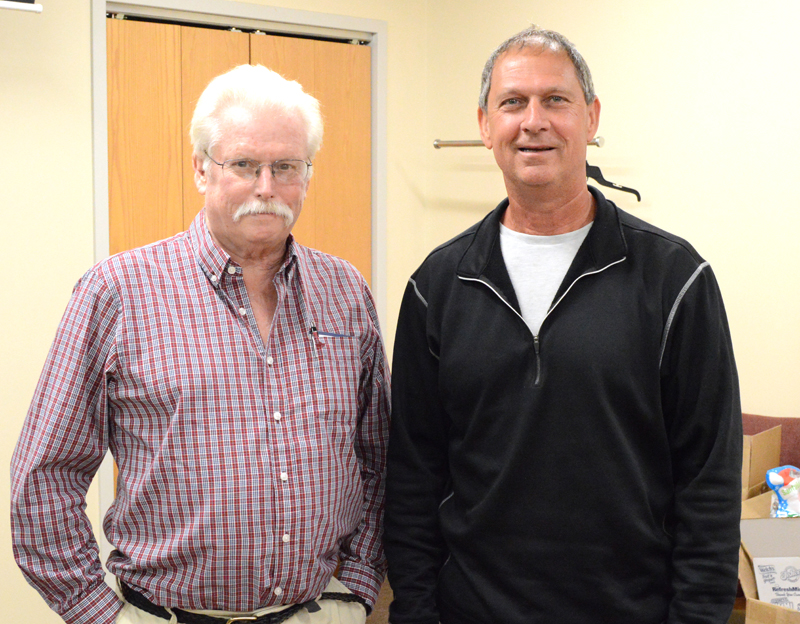 The Community Energy Fund of Lincoln County is launching a new program to upgrade and replace failing heating systems in local homes, with a $50,000 gift to jump-start the work.

The Reny Charitable Foundation, the altruistic arm of the Damariscotta-born and Newcastle-based department store chain Renys, has contributed $50,000 in seed money. The Community Energy Fund will rely on donations to finance the endeavor going forward.

The Community Energy Fund of Lincoln County recently bought and installed this boiler as part of a new program to replace aging or failing heating systems in local homes. (Photo courtesy Brad Lunt)

All donations from individuals and businesses go directly to heating costs. The nonprofit has no other expenses, as all administration and labor is donated by local businesses.

The new campaign to upgrade or replace failing heating systems began after The Community Energy Fund noticed a need among the residents it serves.

“This is a new program that we’re venturing into and we feel really, really, satisfied with the existing program. It’s well-funded and well-executed,” said Robert Clifford, a co-founder and secretary of the fund. “But we found out that a lot of people who need the help also have outdated equipment, and it’s getting worse year by year.”

Clifford, of Colby & Gale Inc., said regulations are constantly changing, which makes it difficult to stay up to date with heating equipment.

“We thought of this program and the Reny family stepped up to the plate, which is terrific. It’s a great base. But if you figure an average of $2,500 (to replace a heating system), that’s 20 people,” Clifford said in reference to the initial $50,000 gift.

John Reny said the Reny Charitable Foundation has been involved with The Community Energy Fund since its inception in 2005, when the foundation was considering how it could do the most good for Lincoln County residents.

“What would really benefit all the people here, our neighbors and friends who shop at our stores, the most? That would,” Reny said of the fund. “So we got in in a big way and continued that, to give them a good base to get going.”

Clifford agreed, saying he considers the Reny family to be the first donors to the fund.

Reny said this next phase of the program makes sense and will have a lasting impact.

“This is pretty much, in our lifetime, a one-shot deal. You fix the oil tank, it’s going to be good for 25 years,” Reny said.

“It’s really a permanent solution to a lot of people,” Clifford said.

According to Clifford, The Community Energy Fund of Lincoln County started with a conversation over beers at King Eider’s Pub, right around the time Hurricane Katrina hit New Orleans.

Todd Maurer, the president of the fund and a co-owner of King Eider’s; Charlie Ault, treasurer of the fund and a financial planner; and Clifford “were just sitting around at the King Eider’s Pub,” Clifford said. “The energy prices were going through the roof. They were going all the way up to $2 a gallon, which we thought was astronomical then. And what are we going to do to help out?”

Clifford acknowledged that his association with Colby & Gale has been a factor in the success of the fund. He said about 70% of the labor and time comes from the Damariscotta-based business, which volunteers workers to refill heating tanks, and now to replace heating systems.

“The only way for this to successfully work is, you’ve got to have networking. And we know all the energy companies. And we have a great relationship. We can just pick up the phone and they accommodate their people really quick, because they know the money’s going to be there and they’re going to get paid,” Clifford said.

Clifford said the fund already replaced a fuel tank for someone in need two weeks ago. 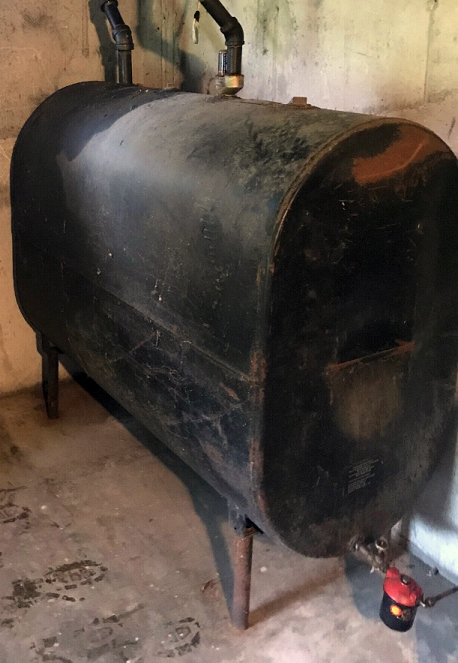 The Community Energy Fund of Lincoln County recently replaced this aging tank as part of a new program to fix or replace heating systems for residents in need. (Photo courtesy Brad Lunt)

“When John gave us the donation, two days later we had an elderly lady that had a bad tank, and we took care of that,” Clifford said. “The reward of it is just incredible. They didn’t know what they were going to do. They thought they were going to have to close up their house and move. … That’s the good thing, is it allows people to stay in the homes where they’ve been for most of their lives.”

Clifford said the fund takes a soft approach to fundraising, flying under  the radar more than other fundraising efforts in the community.

These efforts include an annual mailing of approximately 7,000 appeals for donations as well as regular presentations to organizations like Lions Clubs, Rotary Clubs, and churches.

Clifford said the fund has held events in the winter at Lincoln Theater, but these were more “thank you” and awareness events than fundraisers.

“It’s right in the middle of winter and people recognize that, ‘Gee, it’s cold out here,’ then it opens up their eyes and a lot of those people are supporters,” Clifford said.

Donations may be restricted to an individual or town or unrestricted, to be used for anyone in need.

Most referrals of residents in need come from general assistance programs in local town offices, churches, and businesses that see people in need.

According to Clifford, most of the people the fund helps do not want to ask for help. Therefore, there is an element of anonymity involved when it comes to individuals who receive the fund’s help.

The Lincoln County News donates ad space in the newspaper each week to maintain awareness about The Community Energy Fund.

Donations can be mailed to The Community Energy Fund of Lincoln County, P.O. Box 40, Bristol, ME 04539.

The Community Energy Fund of Lincoln County does not accept requests for assistance directly, but asks residents in need to contact their local town office or to call CHIP Inc., another local nonprofit, at 800-924-9571.