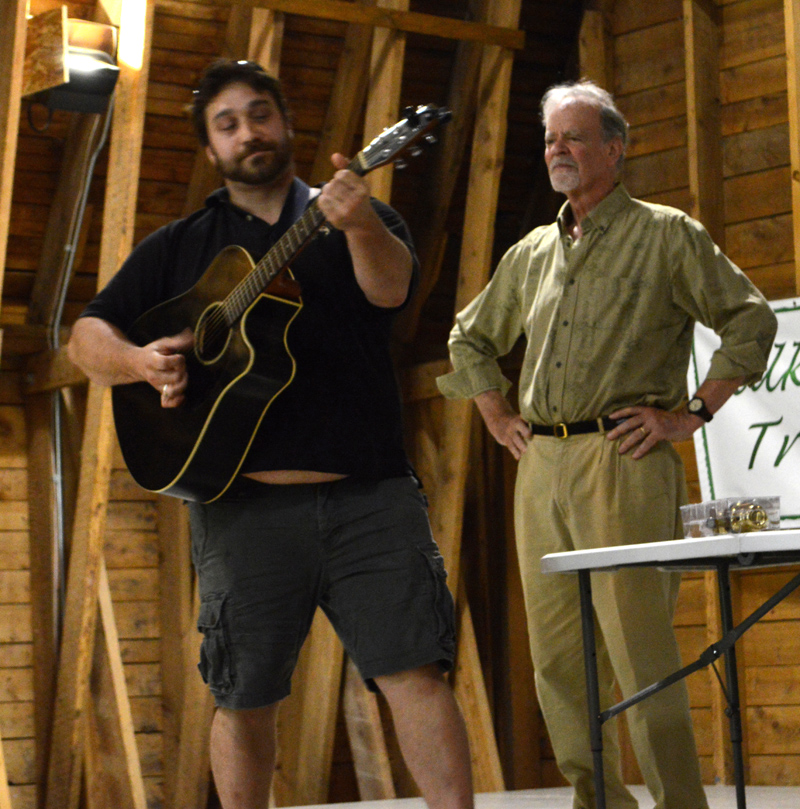 Gianni Barbera strums a parody of Simon & Garfunkel’s “The Sound of Silence,” singing about the “rising mound of garbage” as Michael Uhl looks on during the “Talking Trash!” forum at Darrows Barn in Damariscotta on Thursday, Aug. 22. (Evan Houk photo)

After two hours of spirited discussion during the “Talking Trash!” forum about waste management in Damariscotta, one thing became clear: there are no simple answers to the question of what to do with the never-ending stream of waste in modern society.

Almost 70 concerned Lincoln County residents, as well as public officials and representatives of the waste-management industry, packed the Darrows Barn at Round Top Farm in Damariscotta on Thursday, Aug. 22 for the  forum, hosted by local recycling and waste-management researchers and activists Michael Uhl and Mark Ward.

The evening kicked off with a comedic skit from Uhl and Ward that set a light tone for the discussion of the serious issue of waste management.

In the skit, the pair attempted to extract a new doorknob from its plastic – and nonrecyclable – packaging. Uhl got on the floor, pounding away on the package with a hammer and other tools, while Ward looked on wearing safety goggles and a carpenter’s apron.

Gianni Barbera then entered from the wings with an acoustic guitar, strumming the tune to Simon & Garfunkel’s “The Sound of Silence.” He changed the words and sang about “the rising mound of garbage” instead.

“The rising mound of garbage, that’s what we’re here to discuss this evening,” Uhl said.

It was clear throughout the night that the goal of the forum was to educate Lincoln County residents on how best to reduce, reuse, recycle, rethink, and ultimately lessen the amount of waste in the trash stream.

For the past nine months, Uhl and Ward have been visiting local recycling facilities and transfer stations, a state landfill, two waste-to-energy incinerators, and two materials recovery facilities, picking the brains of everyone they can find to learn more about how waste is handled.

The Lincoln County News has published a series of letters from the researchers containing their findings.

Uhl and Ward used a string of volunteers to illustrate how complex yet important it is to separate different types of recyclables and how easy it is for contaminants to get mixed in, potentially leading to the rejection of an entire batch of recycled goods.

The volunteers sorted through several different types of materials and were asked what they would do with the waste. Most of the objects presented could not be effectively recycled because of cross-contamination between materials. Among these objects were a milk cap, a twist tie, and a small plastic and paper safety seal from an orange juice container.

Uhl and Ward talked about how these small items are invisible to most people and just slip into the trash without a thought. 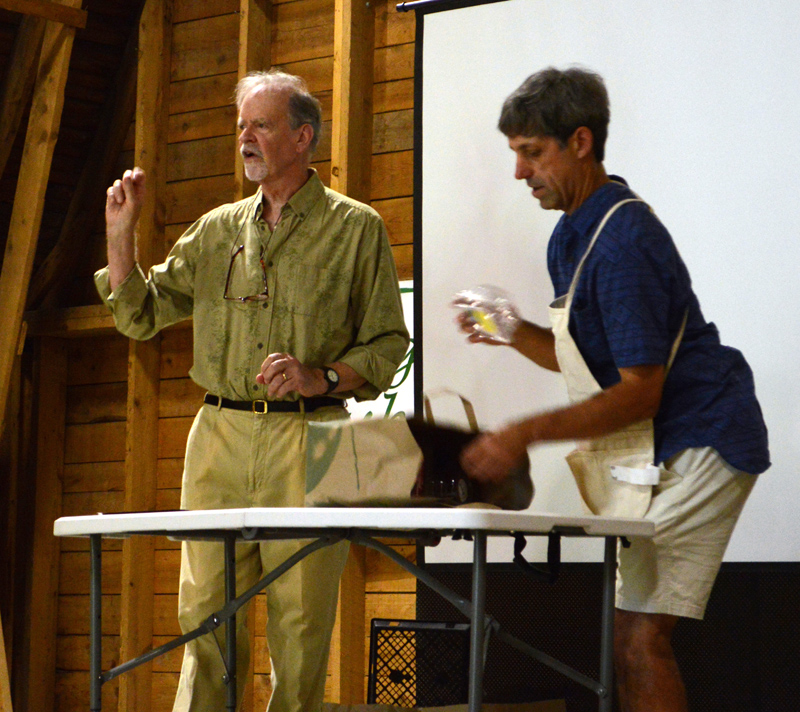 Michael Uhl (left) and Mark Ward display various items and discuss whether they are recyclable during their “Talking Trash!” community forum at Darrows Barn in Damariscotta on Thursday, Aug. 22. (Evan Houk photo)

Some of the objects presented could be recycled, but through a more complex process than simply dropping them into the proper bin at the local transfer station. Among these items were an old cellphone, a half-used can of paint, and a nickel cadmium battery.

Ward explained how these often hazardous materials can be disposed of under state-mandated product stewardship programs, if one knows where to look.

“Unfortunately, it’s not a one-stop shop. You have to be informed of what goes where … It’s not quite as easy as we’d like it to be,” Ward said.

The two talked about China’s 2018 shift in recycling policy that effectively closed the market for plastic recyclables from the U.S. China decreased the amount of contamination allowed in recyclable materials from 20% to 0.5%.

This led to a shift in what kinds of plastic local transfer stations accept.

Currently, the Lincoln County transfer stations do not accept mixed plastics. They only take No. 2 plastic and rigid plastic (like children’s toys or lawn chairs) for recycling, and stress that other numbered plastics and items like garden hoses and PVC pie are not recyclable.

The Lincoln County Recycling guide, in reference to plastic materials No. 1 and Nos. 3-7, says: “when in doubt, toss it out.” It also says to see management for disposal of electronics, lightbulbs, and batteries.

Uhl and Ward gave a PowerPoint presentation laying out nearly everything they have learned since beginning to “follow the garbage” in April 2018.

They laid out Maine’s solid waste management hierarchy, codified in state law, which explains how each individual can responsibly handle waste. The steps to dealing with waste, in order of importance and impact, are: reduce, reuse, recycle, compost, waste to energy, and landfill.

According to Uhl and Ward, the chart flows from what is most beneficial for the environment and cost down to what is the most detrimental. 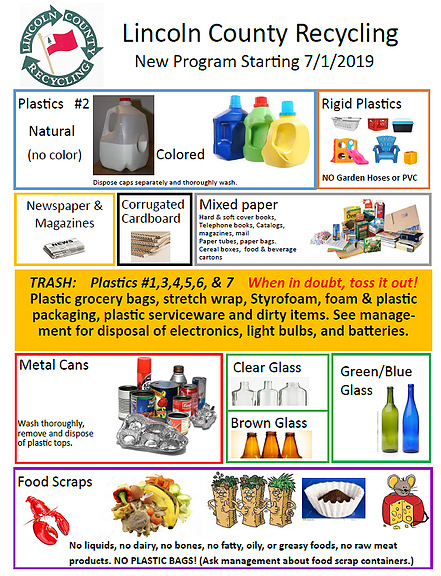 Although it ranks relatively low on the state’s list, the pair highlighted composting as an integral part of reducing the amount of trash that ends up in landfills.

They cited a 2011 study in Maine that found nearly 40% of household waste to be potentially compostable and 28% of waste to be food scraps.

Ward also referenced the success of Maine’s “bottle bill,” which allows customers to return their empty glass bottles and aluminum cans to a redemption center and get their bottle deposit back. He said there is an almost 90% recovery rate for bottles using this program.

During the second half of the forum, J.W. Oliver, editor of the Lincoln County News, conducted an informal poll of the audience and led an open question-and-answer session.

The open forum drew much participation from the audience, with officials from various agencies and companies related to waste management addressing different issues and answering audience questions.

“People like to do what I call wish-cycling. I put it in my bin, so I wish it gets recycled. Well, that’s not the reality. … That’s really where we’re at today, a whole load of wish-cycling, over and over and over. And China finally said no,” Kipfer said.

Ward said by email that a second forum is currently not scheduled, but the duo plans to continue publishing biweekly letters in the newspaper. He also wrote that he would encourage residents with any questions on waste management to ask questions at their local transfer station.

The forum was recorded by LCTV and will air on the cable channel and on demand at lctv.org.