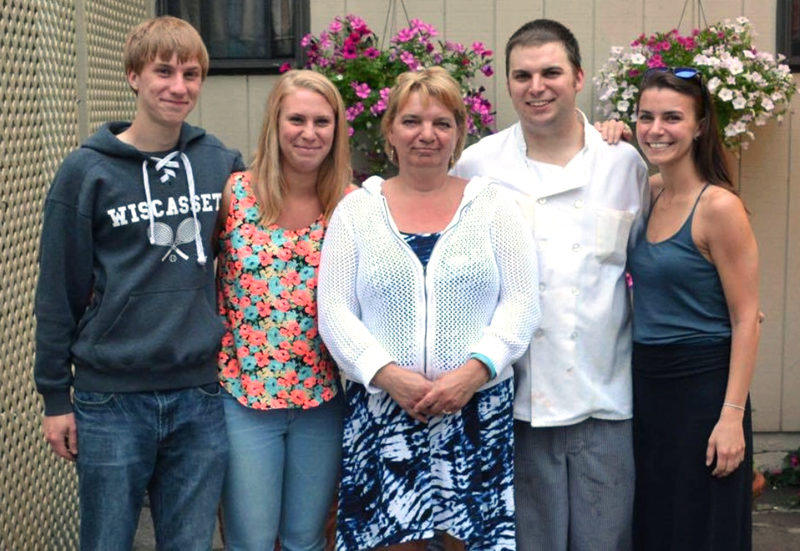 From left: Nathan Panarese with sister Cassie, mother Jennifer, brother Nick, and sister Angela. For the past year, Nathan has been battling leukemia and will soon undergo a bone marrow transplant. (Photo courtesy Cassie Panarese)

Wiscasset resident Nathan Panarese, a 2014 graduate of Wiscasset High School, was studying electrical engineering at the University of Maine at Orono when he was diagnosed with leukemia about a year ago.

“He was alone when he was diagnosed,” said Cassie Panarese, Nathan’s sister. “That was the worst part.”

Family, friends, and the community are now rallying through a variety of fundraising activities to ensure Nathan, 20, is surrounded by those who love him as he continues to battle the disease that has kept him hospitalized for the past four months.

Nathan is currently at the Boston Children’s Hospital in Massachusetts. A bone marrow transplant is his best chance of making a full recovery, and as a 100 percent match, Cassie will be the donor, she said. 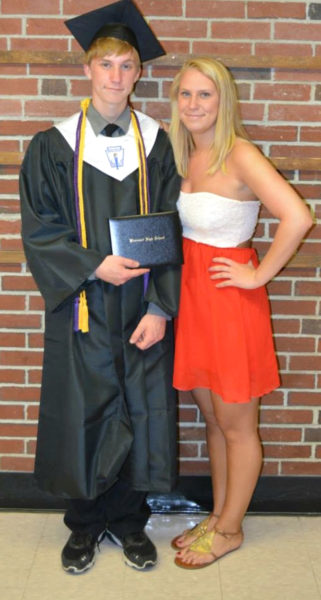 The procedure, planned for December, will keep Nathan hospitalized for another couple of months, Cassie said. Through bottle drives at participating redemption centers, collection jars at local businesses, an online fundraiser, and other activities, the community is enabling Nathan’s family to make frequent trips to Boston, help cover medical expenses, and meet daily financial gaps created from missed time at work, Cassie said.

“It’s amazing how much love and support is coming out of this,” Cassie said. It is attention and support Nathan is begrudgingly accepting, she said.

Initially, when Nathan received the news he had acute lymphoblastic leukemia in his central nervous system, he was more upset about sharing the news with his family than he was about his diagnosis, Cassie said.

“He wasn’t even thinking (about the diagnosis), he was thinking about other people and he was upset because he knew they were going to be hurt,” Cassie said.

He was reluctant to accept funds raised in the community because he felt that there were other people who were much worse off than him, Cassie said.

While Nathan does not want people to pity or feel bad for him, he does appreciate the support, Cassie said. “He understands a lot of people love him and he’s learning to let the love in,” she said.

The Panareses lived in Boothbay before moving to Wiscasset in 2009. Nathan, the youngest of four, and Cassie have always been close, with Cassie born only 17 months before Nathan, she said. Nathan is incredibly smart and always excelled at school, she said.

He was the recipient of a Mitchell Scholarship when he graduated from Wiscasset High School and went to college to become an electrical engineer. In his sophomore year, Nathan kept getting sick and made frequent visits to the health center on campus, Cassie said.

It was after he woke one morning with Bell’s palsy, which causes paralysis in the face, that he was diagnosed with leukemia, Cassie said.

The diagnosis was a shock to the entire family, which has little to no history of cancer, Cassie said. While unexpected, Nathan has accepted the diagnosis and is determined to get better, she said.

His approach to life since his diagnosis is inspirational, Cassie said. “He still has a smile on his face no matter how much pain he’s in,” she said.

Nathan’s brother Nick and sister Angela were also tested to be bone marrow donors for Nathan, but Cassie was a perfect match. “I don’t care if it hurts,” Cassie said of the upcoming procedure. “He’s been suffering for so long, I can handle the pain.”

With Nathan too sick to receive chemotherapy or radiation, the bone marrow transplant is believed to be the only option that will enable Nathan to make a full recovery, Cassie said.

Cassie would like to see Nathan recover, return to school, and live the life he was meant to have, she said. Nathan wants to be discharged from the hospital, sleep in his own bed, spend time with the family pets, travel, and live, she said.

The cancer has changed his perspective. “He realizes everything can be taken away in seconds,” Cassie said.

His battle with cancer has changed Cassie’s perspective too, teaching her to enjoy and appreciate all those simple, little things that sometimes get taken for granted, she said.

Donations can also be made to a GoFundMe account at gofundme.com/xyb49zdg.

Collection jars will soon be placed in local businesses, Cassie said. She encourages anyone interested in helping to coordinate additional fundraising activities to contact her at 315-1471.