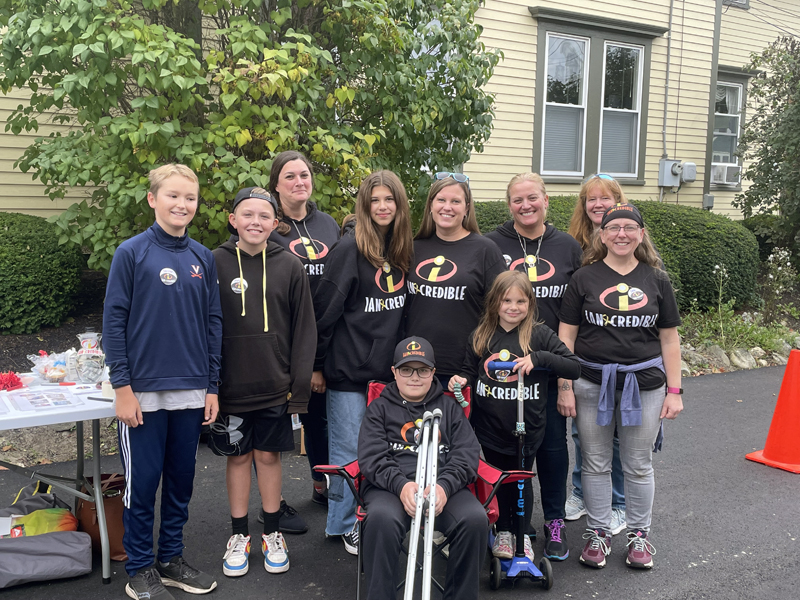 Members of the community are rallying around a Nobleboro family whose 10-year-old son was diagnosed with rare form of bone cancer this summer.

Since Ian Michaud was first diagnosed with osteosarcoma in August, friends of Kristen and Ira Michaud have launched web pages to share information; organize fundraisers, and manage an online schedule of meal delivery to make sure the family remains properly fed while they deal with their son’s illness.

“We have a great village,” fundraising co-organizer Debra Lomas said. “That’s what it comes down to.”

According to Ian’s mother Kristen Michaud, life has been a whirlwind since Ian’s diagnosis Aug. 18.

Kristen Michaud said the problem first presented in July after Ian sustained an otherwise unremarkable injury playing on the Great Salt Bay Consolidated School’s playground. In the days that followed, Ian Michaud occasionally mentioned his leg hurt, but the discomfort was intermittent.

“It didn’t hurt bad enough that he was crying or anything,” Kristin Michaud said. “He went around like normal life. It was not consistent.”

It wasn’t until Ian and his father, Ira Michaud, returned from a Boy Scout camping trip in August, an event that involved a lot of walking, that Ian complained of significant discomfort.

“I thought okay, well, maybe you fractured it and I missed it and I’m feeling like a horrible mom because I missed your fracture,” Kristen Michaud said. “So we went in on a Wednesday and okay, we’ll have X-rays on it, and I know we were flagged. We had X-rays and the next day we had an MRI and the next day we were at the Maine Cancer Center, so it went that fast. They could see it on the X-ray … They were 99% sure it was osteosarcoma and we just had to go to Boston Children’s Hospital to confirm everything.”

According to all tests to date, Ian Michaud’s tumor is confined to his tibia, which is positive. “It’s going to be a 30-week treatment,” Kristen Michaud said.  “He has two rounds of treatment then surgery and then more chemotherapy.”

According to multiple sources including The Mayo Clinic, Centers for Disease Control, Johns Hopkins Health, and the American Cancer Society, osteosarcoma originates in bone-forming cells. It can affect anyone at any time, but it most often impacts children, adolescents, and young adults, and it tends to appear slightly more often in males than in females.

Sources differ slightly on exact numbers but all agree osteosarcoma is extremely rare. Between 800 to 1,000 new cases a year are detected in the United States. Of those, approximately half are found in children. Ian’s family has been told there might be six cases in Maine in a given year.

Treatment usually requires a combination of aggressive chemotherapy and surgery. After completing treatment, lifelong monitoring is recommended to watch for potential long-term health effects as a result of the treatment required.

As it happens, Ian’s diagnosis follows a month after both parents began new jobs. In July, Kristen Michaud started her first year as Great Salt Bay Consolidated School’s first grade teacher. At the same time, Ira Michaud started as the principal at the Vassalboro Community School. Prior to Vassalboro, he served as the principal of the Nobleboro Central and Edgecomb Eddy schools. He began his administrative career as the assistant principal at GSB in 2013 and was a school teacher for 13 years prior to that.

“Fortunately we are not new to the community,” Kristen Michaud said. “We moved here because Ira was working at GSB and he told me about this community and I was like let’s move there.”

On Tuesday, Oct. 11, Round Top Ice Cream donated the proceeds of its final day of the season to the Michaud family. According to business owner Stephanie Poland, between donation jars and sales, the effort raised more than $5,000 for the cause.

Family friend Rosie Davis said Round Top was “absolutely packed” when she visited around 5:30 p.m., the line of customers doubling back on itself. Davis thanked Round Top for putting out jars to accept free will donations in addition to ice cream sales.

Tuesday was supposed to be last day of the year, but Round Top still has supplies and staff so the business will remain open through Friday, Oct. 14, from noon to 5 p.m. Poland said.

Ian Michaud, who has just begun his second course of chemotherapy, was able to visit briefly and enjoy a thick shake, Davis said. He saw the giant pumpkin outside, painted with the Ian-credible logo and signed by dozens of well wishers in the community.

On Saturday, Oct. 1, the Ian-credible Mega Multi Family Yard Sale, held at Damariscotta Dental on Bristol Road raised more than $4,100 for the effort for the family. Speaking at the event, Lomas, a Michaud neighbor, said the support was moving.

“The turnout today has been absolutely fabulous,” Lomas said. “We have a lot of families and groups that donated. We had a lot of help to help us set up. We set up in record time. By noon we probably had over $2,500 raised.

“Probably the most touching moments was when a little boy was the first person to add to our donation jar and he donated $2 because his mom wanted him to donate some stuff,” Lomas said. “He was reluctant to donate but he said ‘I think I should give something.’ So we all had a good cry. The next moment of tears was the first person who dropped $100 bill in our jar.”

According to Swanberg, the outpouring of support is well warranted for the family. Both Michauds are educators, active in the community and in their church. Ira Michaud volunteers with the Boy Scouts. Ian and his two sisters, Evelyn and Sofie, have all participated in YMCA theater productions.

“There are few people in the Midcoast and surrounding communities that this family hasn’t impacted in some way,” Swanberg said.

A Vassalboro company Got Vinyl? Ink & Printing has also set up a “funraising” website where donors and friends can buy Ian-credible merchandise including T-shirts, hats, hoodies, tumblers, tote bags, yard signs, and more.

“The Vassalboro community has been so wonderful about embracing Ira though,” Lomas said. “The support has been wonderful and overwhelming.”

On Oct. 11, the Vassalboro PTO organized a food truck fundraising event outside their school, raising $2,649 for the Michauds.

Michaud’s GoFundMe page can be found by going to gofundme.com/f/ians-infantry.

Ian’s progress can also be followed via the Ian’s Journey Facebook page.