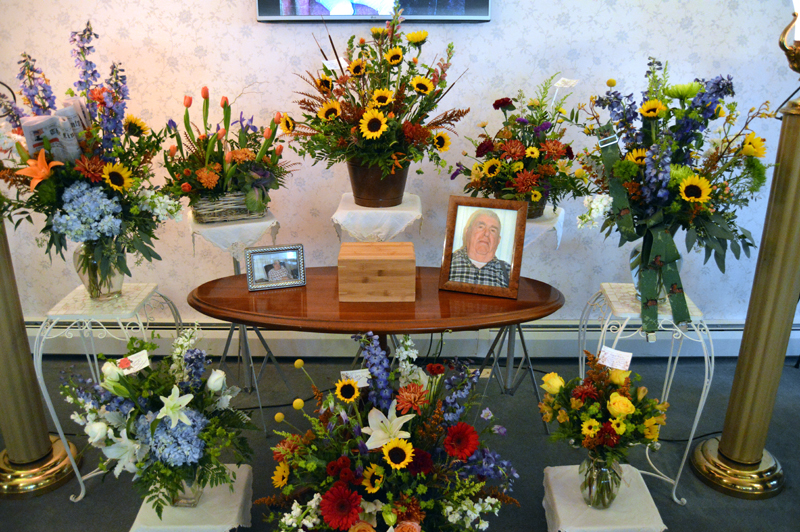 A display of flowers and photos in memory of Samuel E. “Sam” Roberts, publisher emeritus of The Lincoln County News, at the Strong-Hancock Funeral Home in Damariscotta on Thursday, Nov. 15. The bouquet at left holds the Nov. 8 edition of the newspaper, the bouquet at right a pair of his trademark suspenders. (J.W. Oliver photo)

Family, friends, and community leaders remembered Samuel E. “Sam” Roberts as a civic leader and family man during his service at Strong-Hancock Funeral Home in Damariscotta on Thursday, Nov. 15.

Roberts, 87, of Nobleboro, was the publisher of The Lincoln County News from 1966-1992, the third generation of the Erskine-Roberts family to own and run the newspaper. His son, Christopher A. “Chris” Roberts, is the present-day publisher.

While Roberts’ leadership of the newspaper was at the heart of his life and legacy – the Rev. John Ineson said the service was on Thursday because of the newspaper’s publication schedule – many testimonies were more personal, reflecting on Roberts as a father, grandfather, and uncle.

“I’ve heard more than one person say it was Sam’s way or the highway,” Paula Roberts said. “Sam could be a real bear. He would bite your head off one minute and, the next, give you a great big bear hug. And Sam gave the best bear hugs, with those great big arms of his.”

“Under that bull moose persona was a much gentler Sam,” she said. “He loved babies and young children.”

Roberts always had a game or a poem – or a song – to make children laugh.

Paula Roberts sang one of the ditties, inviting the audience to sing along: “A peanut sat on the railroad track; his heart was all a-flutter. Along came Engine 99. Toot toot! Peanut butter.”

Paula Roberts shared stories from her father-in-law’s final days. Some were humorous.

“Sam voted by absentee ballot several weeks ago. He used to make comments about dead people voting in Chicago,” she said. His daughter, Deborah Rix, “said he waited until 12:45 a.m. on Election Day to die so no one could say a dead man had voted.”

There were also touching stories.

“The day before Sam passed, Abbie came into the hospital, went up to his bedside, kissed him gently on the forehead, and said, ‘Hello, handsome,’” Paula Roberts said. “I’ve got to tell you, Sam was not looking too good. In that tender moment, I realized how much the two of them, married for 67 years, loved each other.”

Paula Roberts read a letter to her father-in-law from one of his granddaughters, Katrina Rix, who lives in Alaska and could not attend the service.

Katrina Rix said her grandfather’s advice inspired her to join the ambulance corps and fire department in Seward, Alaska.

“You helped teach me that if I can help, not only should I, but I need to,” she said in the letter.

“A high school dropout, Sam was the most intelligent man I’ve ever met,” Paula Roberts said. “He could build or fix anything. He helped organize the CLC Ambulance Service, helped start a bank, volunteered as a fireman, took over the newspaper and print shop when barely an adult, rescued the New England Newspaper Association, worked on the Miles Memorial Hospital League rummage sale, and the list goes on and on.” 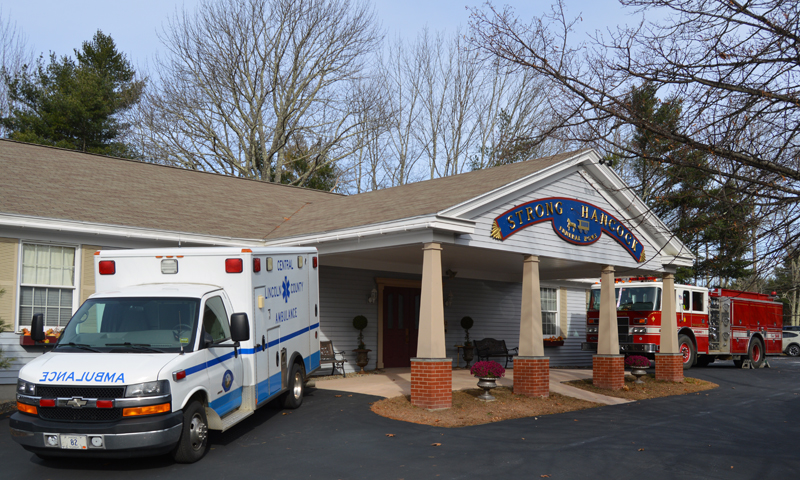 An ambulance from the Central Lincoln County Ambulance Service Inc. and a fire truck from The Massasoit Engine Co. outside Strong-Hancock Funeral Home in Damariscotta on Thursday, Nov. 15. The ambulance and fire truck were there to honor Samuel E. “Sam” Roberts, a founder of the ambulance service and 67-year member of the engine company. (J.W. Oliver photo)

During brief remarks prior to the presentation, Devin said he always makes sure he has three pennies in his car to buy The Lincoln County News. The newspaper sells for 53 cents with sales tax.

Devin spoke about Roberts’ enduring legacy in the community, through his family as well as the newspaper.

The family’s community service, including the service of Roberts’ grandson, John Roberts, as fire chief in Damariscotta, is the best tribute anyone could give him, Devin said.

An ambulance and a fire truck from Central Lincoln County Ambulance Service Inc. and The Massasoit Engine Co., respectively, were parked in front of the funeral home to honor Roberts, a founder of the former and 67-year member of the latter.

John Gallagher, a 46-year volunteer and employee of CLC Ambulance, recounted how Roberts signed him up in the service’s first year, 1972.

Gallagher was fishing off the Damariscotta-Newcastle bridge when Roberts, driving across the bridge, stopped and told him the service needed help.

Gallagher remembered Roberts’ tongue-in-cheek sales pitch: “’You have a strong back and a weak mind, can I sign you up?’”

Roberts established a strong foundation for the ambulance service, which owes its longevity to his foresight, Gallagher said.

“Abbie, thank you very much for sharing him with us,” he said.

Damariscotta historian and former Selectman Calvin Dodge said Roberts drove the ambulance when his father-in-law, Winfield Cooper, needed to go to a hospital in Portland from Damariscotta.

It was a cold day and the heat was not working in the old ambulance. Dodge remembers Roberts’ reassuring words: “’Keep Winfield bundled up. We’ll get him there.’”

Roberts was a regular at selectmen’s meetings when Dodge was on the board from 1968-1974. He asked good questions and offered insight, Dodge said.

“I often remember how kind and thoughtful Sam was,” he said.

In addition to his many other endeavors, Roberts was an active and longtime member of the Damariscotta-Newcastle Lions Club.

“We will miss Sam,” said Ernie McNiff, past president of the club. “We wish Abbie the best and we thank him for his service that he has given to the community.”

Brian Williams, a friend of the Roberts family, sang “The Gift of Love” accompanied by Lucy Martin, a former assistant editor and reporter at The Lincoln County News, on piano.

Paula Roberts closed the remembrances by reading the Grange chaplain’s opening charge: “And when we are called to lay down our implements on Earth, may we enter that paradise not made with hands, eternal in the heavens, and receive that welcome plaudit: well done, good and faithful servant.”

“Well done, Sam,” she said. “You were a good and faithful servant.”