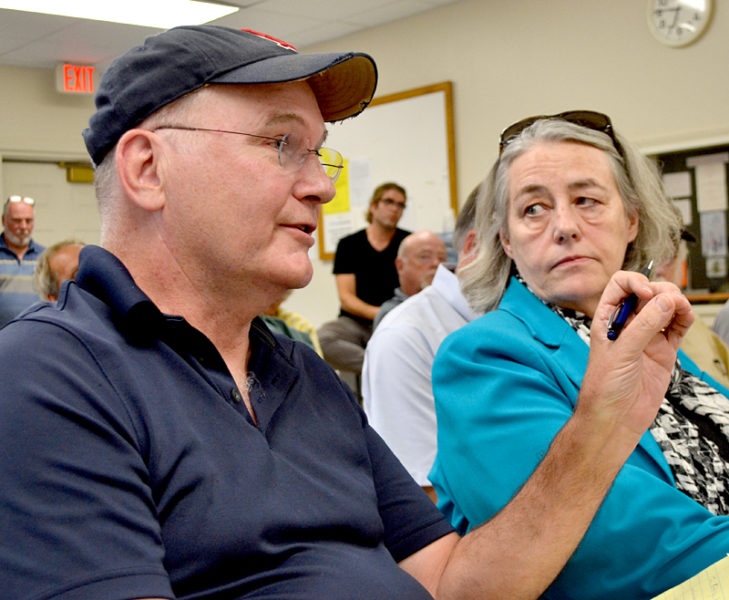 John Tibbetts addresses representatives from the Maine Department of Transportation about the Sherman Marsh Wetland Bank project as Martha Gaythwaite looks on during a meeting at the Newcastle fire station Wednesday, Aug. 17. (Maia Zewert photo)

After meeting earlier this summer with landowners frustrated about restrictions the state plans to put on their property, Maine Department of Transportation officials returned with a less restrictive list of allowed uses for the land around Sherman Marsh.

DOT Project Manager Deane Van Dusen discussed the allowances during a meeting in the community room of the Newcastle Fire Department on Wednesday, Aug. 17.

The Sherman Marsh Wetland Bank, as the DOT calls the project, would place conservation easements on 16 properties in Newcastle and Edgecomb, with the area of the easements totaling approximately 130 acres.

By placing the conservation easements, the DOT would create a wetland bank to offset the impact of transportation projects on wetlands in the region. 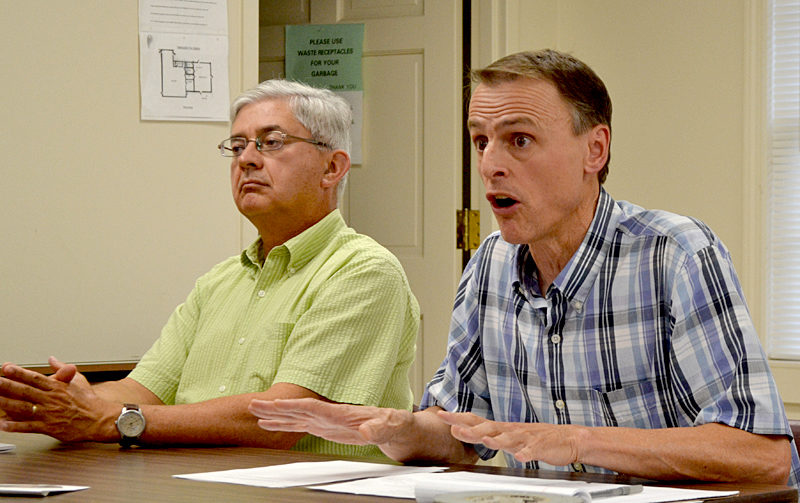 The Sherman Marsh Wetland Bank will become the second bank site in the state. The DOT and the Army Corps of Engineers signed the Maine Umbrella Mitigation Banking Agreement for approximately 501 acres on Sears Island, off the coast of Searsport, in August 2011.

The Sherman Marsh project has been met with opposition from most of the property owners it would impact and Newcastle town officials. Many have expressed frustration about the restrictions the DOT would place on their land once the easements go into effect and about the amount of land in question.

After a meeting in June between the DOT, the Army Corps of Engineers, and the property owners, a new meeting was scheduled for July to allow property owners to ask questions of members of the “interagency review team” that determined the width of the buffer zone for each property.

The meeting was canceled when Ruth Ladd, a representative of the Army Corps of Engineers who chairs the interagency review team, informed Van Dusen that the review team was advised by its legal counsel not to attend the meeting, Van Dusen said.

The interagency review team did agree to review the buffer widths and restrictions the DOT would be required to implement in order to receive the wetland bank credits.

During the Aug. 17 meeting, Van Dusen said the interagency review team ultimately decided that all previously discussed buffer widths would remain the same, however, an expanded list of uses would be allowed by property owners on their land within the easement areas.

Foot access for recreational hunting, fishing, hiking, and nature observation would be allowed by property owners and anyone they choose. Property owners could also create a winding, unpaved path to the marsh not to exceed 6 feet in width.

In addition, property owners can limit the height of vegetation in the buffer to maintain the existing view of the marsh. The height of the vegetation could range from 3-5 feet, Van Dusen said.

The interagency review team also provided the DOT with additional allowed uses for the properties owned by Justin Wood and Marva Nesbit, which have larger buffer zones. The DOT reviewed the additional uses privately with Wood and Nesbit after the meeting.

The expanded list of uses has “hit the reset button” on compensation negotiations between the state and property owners, DOT Senior Property Officer Andrew Johnson said.

After the offer of compensation is made to all landowners, the department must allow a minimum of 28 days for property owners to negotiate. If negotiations fail, the department could file a notice of condemnation and take the land by eminent domain, Johnson said.

Johnson said he did not have an exact time frame for the appraisal and negotiation process, but said the offers would probably not be made until after the first of the year.

Many in the audience questioned why the DOT feels the department would take better care of the land than those who have been living on it for years, and asked whether the DOT has a management plan for the future.

“If you didn’t do anything and we as landowners kept doing what we’ve been doing, what would happen to the marsh?” Pat Hannigan said. “Is there such a big difference of what you do, and is it worth taking some of our rights away so that the marsh is going to be that much better?”

Van Dusen said the department takes a long view on acquisitions and takes into account future changes of ownership and land use.

“It’s about how we can sustain a high-value ecosystem like Sherman Marsh over time. That’s the importance of the buffers,” Van Dusen said.

The DOT’s management plan of the marsh would be to control the phragmites, an invasive reed, that could take over the marsh, and maintain the indigenous vegetation in the marsh, Van Dusen said.

State Rep. Mick Devin, D-Newcastle, asked what made Sherman Marsh such a high-value and rare marsh that the DOT wanted to conserve it.

Van Dusen said a salt marsh is a rare ecosystem in the Midcoast, and even though the DOT doesn’t know what specific wildlife is in Sherman Marsh, the opportunity to restore a 220-acre salt marsh is unique.

Other questions included how much the total cost of the project would be and how much credit the DOT will receive as a result of the Sherman Marsh bank.

The cost of the project, including modifying the channels in the marsh after the dam failed in 2005 and controlling the phragmites, was approximately $1.3 million, Van Dusen said. The estimate does not include the easement costs.

Van Dusen gave a rough estimate of $15,000 for the annual cost to control the phragmites.

Van Dusen said he was not sure how much credit the DOT would receive as a result of the Sherman Marsh bank.

The interagency review team has received numerous requests from Van Dusen to meet with the town, however, each request has been declined, he said.

Further negotiations with the interagency review team are needed for the Wood and Nesbit properties based on what the owners requested, Van Dusen said. Once the negotiations are complete, the department can move forward with scheduling the appraisals and negotiations.

If the interagency review team agrees to meet with the town, the appraisals and negotiations would be delayed, Van Dusen said.

The Newcastle Board of Selectmen will send a letter to Ladd expressing the board’s disappointment in the interagency review team’s absence at the Aug. 17 meeting.

During the selectmen’s meeting Monday, Aug. 22, Newcastle Town Administrator Jon Duke said he is trying to schedule a meeting with representatives from the offices of U.S. Sens. Angus King and Susan Collins to discuss the project.