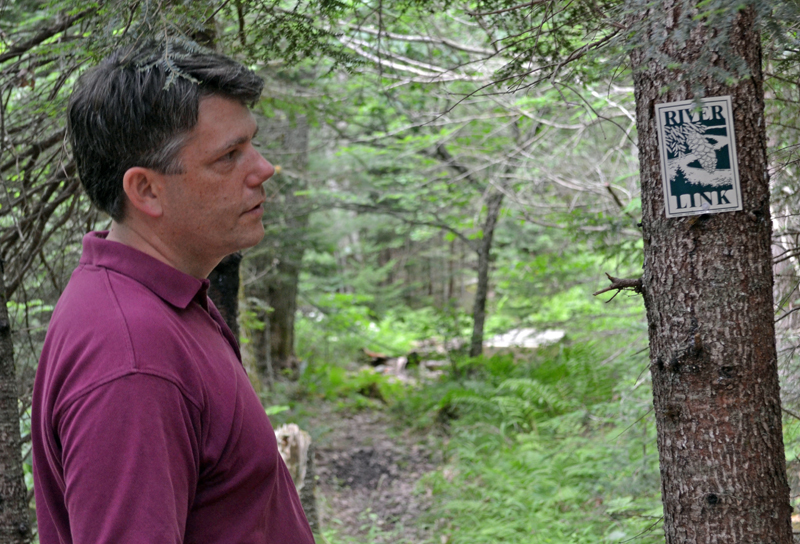 The Damariscotta River Association recently closed on a 178-acre parcel in Edgecomb, permanently protecting critical wetlands habitat and a half-mile tract of the River-Link Trail between the Damariscotta and Sheepscot rivers.

Hikers were previously able to walk the land, which helps connect Dodge Point Preserve in Newcastle to the Schmid Preserve in Edgecomb, due to a trail agreement with the landowner, said DRA Executive Director Steve Hufnagel.

The agreement was temporary, revocable, and provided no guarantee that the uninterrupted wildlife corridor created by the River-Link Trail would remain free from development, Hufnagel said.

The DRA and the group of land trusts, municipalities, government agencies, and private landowners that has worked to build the River-Link since the late 1990s now has that guarantee, he said.

With help from a Maine Natural Resource Conservation Program grant and funding from the Ram Island Conservation Fund at the Maine Community Foundation, DRA closed on the property for $176,000 in late June.

The property is now known as the Barrows Louderback Preserve in honor of the previous owners – Marianne Louderback and her grandfather, Paul Barrows, one of the first professional foresters in Maine, Hufnagel said.

Barrows deeded the property to his granddaughter, who gave DRA priority when selling it, allowing more than a year for DRA to secure the funding for its purchase, Hufnagel said.

Barrows “loved this property,” Hufnagel said. “Marianne is really pleased it will be forever protected.”

The DRA calls the Barrows Louderback Preserve the “golden spike” of the River-Link Trail, a 7-mile trail cut through more than 1,500 acres of contiguous conservation land stretching from the Damariscotta River to the Sheepscot River.

For nearly two decades, more than a dozen organizations have worked together to ensure wildlife would have access to an uninterrupted corridor of land between the rivers. 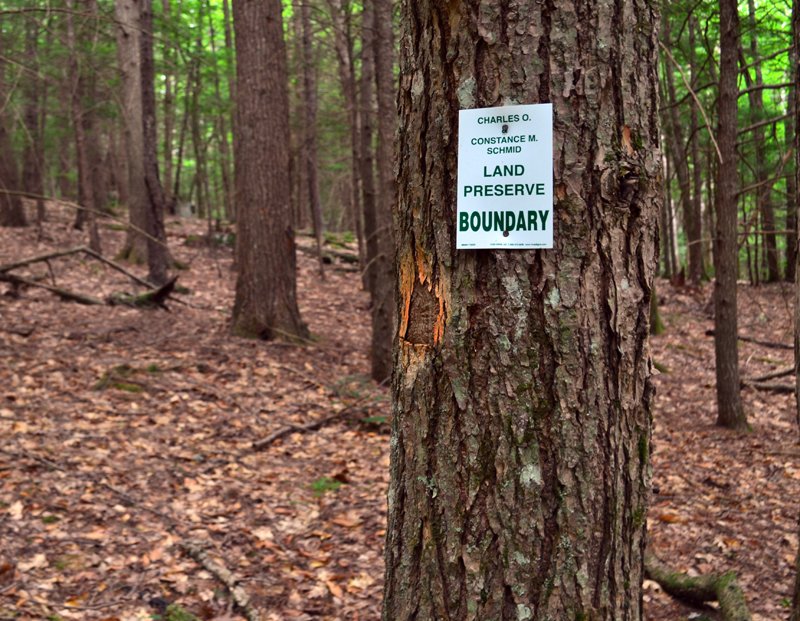 The marker between the Barrows Louderback Preserve and the Schmid Preserve in Edgecomb. (Abigail Adams photo)

The trail is now complete, connecting the Dodge Point Preserve on the Damariscotta River in Newcastle with the Zak Preserve on Wildcat Creek in Boothbay. Wildcat Creek drains into the Sheepscot River. The wildlife corridor is home to “shy animals,” such as moose, bear, deer, bobcats, fisher cats, and a variety of birds that would not be able to successfully nest or survive without a large tract of land to move through, Hufnagel said.

Those animals roam freely through the River-Link corridor, undisturbed by the human habitation just miles away from it, Hufnagel said.

“It really feels like the North Woods and it’s right outside the back door,” Hufnagel said. “You can hunt and fish right out your back door. You can go 5 miles without crossing a road.”

Hunting and fishing is allowed on the conservation land that composes the River-Link Trail.

When the trail was just beginning to be cut, it had to be well-marked so hikers would not get the trail confused with the “moose highway,” the term Hufnagel used to describe the trail created by moose walking through the woods.

Deer scat, deer bones, otter tracks, and a flock of hermit thrush singing what New Scientist magazine has called “the finest sound in nature” could be seen and heard on the trail in the Barrows Louderback Preserve.

“They’re a shy bird,” Hufnagel said of the hermit thrush. “To hear so many of them singing like this is really special.”

There are forests both deciduous and coniferous along the trail. Swaths of hemlock and pine trees give way to swaths of oak, elm, and maple trees, a change in scenery caused partly by nature, and partly by past land uses, Hufnagel said.

A meadow in the middle of the forest was created by an old beaver dam that has since washed out, Hufnagel said. 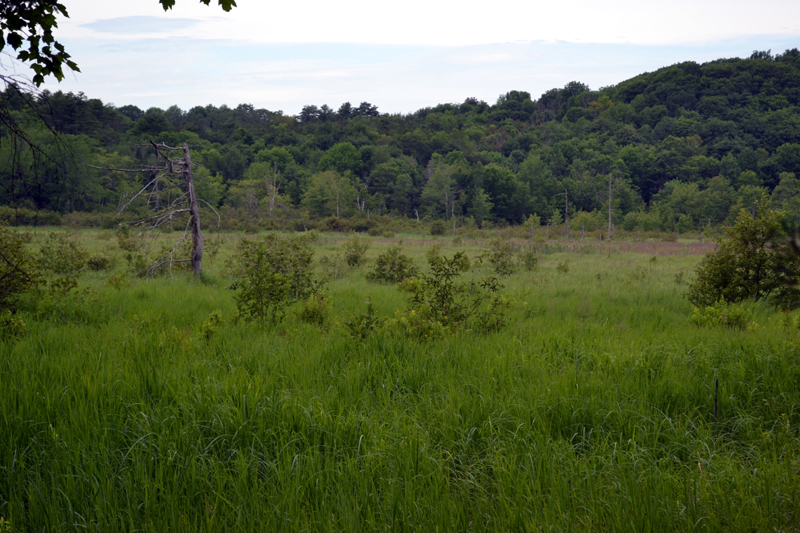 The Barrows Louderback Preserve contains minor elevation, giving hikers a vista of acres of marshland, one of the many forms of wetland that make the preserve so important, Hufnagel said.

Ninety-one acres of the preserve are composed of wetlands, and will remain out of reach and out of view from hikers in an effort to protect the fragile and critical area, Hufnagel said.

In addition to connecting the River-Link Trail and wildlife corridor, the preserve serves as a bridge between two sites recognized by the state of Maine for their ecological significance, Hufnagel said.

The preserve is a bridge between the Sherman Marsh Wildlife Management Area and the Lower Sheepscot River Focus Area, both noted for their rare wildlife and plant habitat.

The wetlands on the preserve are “some of the most significant headwater wetlands” for the Sherman Marsh, Hufnagel said. Sherman Marsh, in turn, drains into the Sheepscot River.

Wetlands not only provide important habitat, but also serve as a filtration system for the water that drains from them, Hufnagel said. They slow the rush of freshwater from storms, which is good for infrastructure and for the shellfish industry. 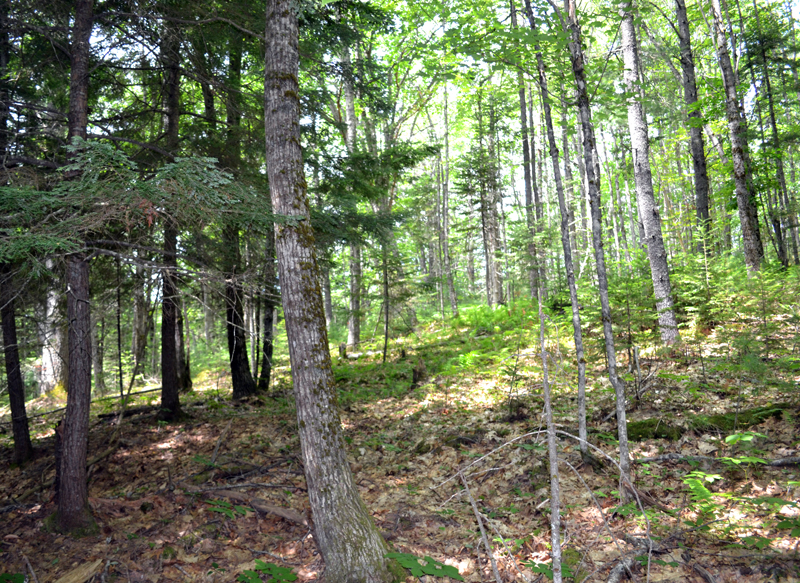 The surge of water washes out culverts and roadways, and increases the acidity levels in tidal rivers, which prevents clams from growing, Hufnagel said. Healthy wetlands prevent that from happening.

The DRA secured the Maine Natural Resource Conservation Program grant to purchase the Barrows Louderback Preserve in part due to the importance of the wetlands on the property.

DRA’s acquisition of the preserve marks the last piece in the River-Link Trail, a “big-picture vision” made a reality through a partnership of numerous organizations and individuals.

“This really highlights how important it is for groups to work together,” Hufnagel said. “This is not something we could have done alone.” Providing the uninterrupted space wildlife needs to thrive can not be done piecemeal, he said.

In the middle of a bustling peninsula filled with human development, there is still and forever will be uninterrupted wilderness, Hufnagel said.