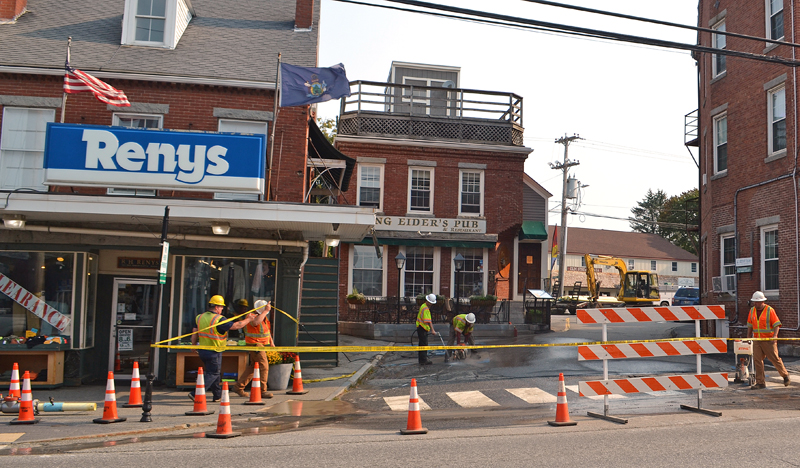 A long-awaited construction project on Elm Street and Theater Street in Damariscotta is underway.

Crews from the Great Salt Bay Sanitary District and Hagar Enterprises Inc., of Damariscotta, were on site Tuesday, Sept. 5 to begin the installation of a temporary waterline that will service customers in the Day Block, Elm Street Plaza, and the surrounding area for the duration of construction.

The project, which includes new, wider sidewalks on both sides of the entirety of Theater Street and both sides of Elm Street from Elm Street Plaza to Lewis Point Road, as well as drainage improvements, is one the town has been looking forward to for years, according to Town Manager Matt Lutkus, with preliminary plans dating back to 2008.

The town applied for a Community Development Block Grant for the project in 2015 and again in 2016, but the Maine Office of Community Development passed over the application both times. The communities that received funding were under a consent decree or order from the Maine Department of Environmental Protection requiring them to make utility improvements.

As neither Damariscotta nor the Great Salt Bay Sanitary District is under such mandates, it became clear that the project “was pretty far down on the waitlist” and both parties decided to proceed with a project without the grant funds, Lutkus said.

After briefly considering a scaled-back project, the town decided to move forward with a project similar to what was proposed in the Community Development Block Grant applications. In November, voters approved two bonds totaling more than $500,000 for public works equipment and infrastructure projects in town. Approximately $350,000 of the funds were designated for the Elm Street project, bringing the total amount the town had available for the project to $445,450.

In April, the Damariscotta Board of Selectmen awarded the contract for the project to Hagar Enterprises for $530,096.50. Of the total bid, the town is responsible for $334,726, plus a 10 percent contingency, while the Great Salt Bay Sanitary District contributed $190,370 for the replacement of the waterline.

After installing signage last week, the Great Salt Bay Sanitary District is in the process of switching water service to a temporary waterline. Sal Bartolotta, plant operator for the sanitary district, said customers might notice a decrease in water pressure for a short period of time, but the district hopes to limit this impact as much as possible.

Once the waterline has been replaced, inches of overlay will be scraped from Theater Street to lower the road for the new sidewalk. The lowering and rebuilding of Theater Street is scheduled to begin Sept. 27 and continue for three days.

The installation of new sidewalks and curbing is scheduled to begin Sept. 28 and continue until Oct. 6.

Barring any unforeseen complications or weather events, the construction should not interfere with the Damariscotta Pumpkinfest, which will take place Columbus Day weekend, Lutkus said.

“The hope is to have the construction done before Pumpkinfest, but, at a minimum, the area adjacent to downtown will be completed so that activities can go forth as planned,” Lutkus said.

Lutkus has offered Pumpkinfest organizers the use of space in the municipal parking lot in the event the stage usually located on Theater Street needs to be moved.

“We are trying to work to accommodate Pumpkinfest, businesses, and citizens as best we can during construction,” Lutkus said.

King Eider’s Pub, at 2 Elm St., announced on its Facebook page that it will open at 4:30 p.m. from Tuesday, Sept. 5 through Friday, Sept. 8 due to the construction. Starting Saturday, Sept. 9, the pub will return to regular business hours and open at 11:30 a.m.

Joe Lane Lobsterman, at 115 Elm St., will temporarily operate out of a food stand in the municipal parking lot during lunch hours while construction continues. Dinner service will remain at the restaurant’s permanent location. More information will be available on the business’s Facebook page.

Any other businesses on Elm Street that wish to have a temporary location on public property during construction should contact the town office, Lutkus said.

With construction slated to start early in the morning, any Elm Street residents concerned about being able to leave their driveways should move their vehicles to the municipal parking lot before 7 a.m., Lutkus said. No permits are required.

Finishing touches and other details are slated for completion by Oct. 20.

Lutkus asked for patience from residents and visitors while the long-awaited project is completed.

“We’re going to have a wonderful project when it’s done, with a new sidewalk and new drainage, but in the meantime, it’s going to be a hassle,” Lutkus said. “We’re asking for everyone to plan ahead and be patient, because it will be worth it in the end.”

Anyone with questions should call the town office at 563-5168 . The project schedule will be posted at damariscottame.com.