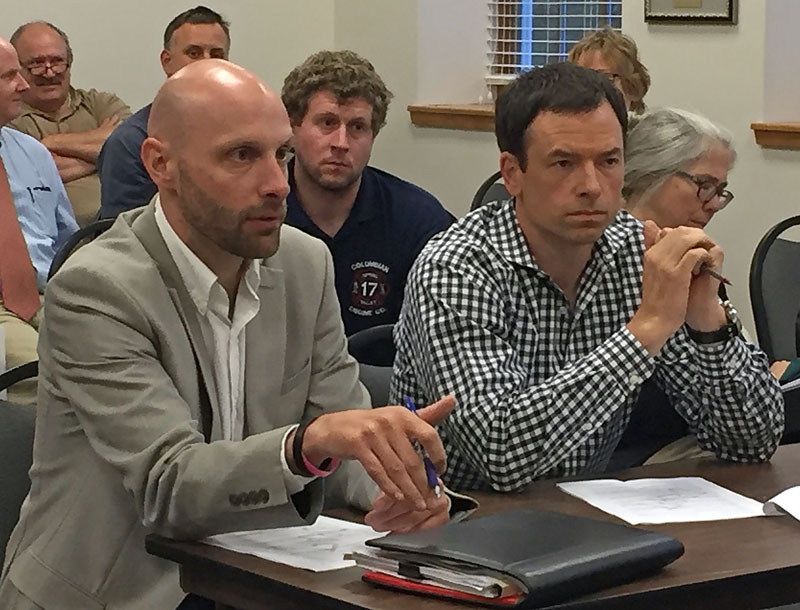 Austin Turner (left) and John Scribner, representatives of the Dollar General and Sherwin-Williams development, discuss the construction timeline during a Damariscotta Planning Board meeting at the town office Monday, July 10. (Maia Zewert photo)

Two months after receiving approval from the Damariscotta Planning Board, the developer behind the proposal to build a Dollar General store and a Sherwin-Williams store at the intersection of Main Street and Biscay Road said he hopes to begin construction this month.

John Scribner, of Lisciotti Development Corp., which created the legal entity Damariscotta DG LLC, and Austin Turner, a Bohler Engineering civil engineer working with Lisciotti Development Corp. on the project, appeared before the planning board Monday, July 10, to update the board on their progress toward meeting the conditions of approval. Damariscotta DG LLC is the applicant for the project.

As part of its approval, the Damariscotta Planning Board required the applicants to obtain a letter from Damariscotta Fire Chief John Roberts about any recommendations he might have.

Roberts said he initially pushed for the applicant to install a sprinkler system in both the Dollar General building and the Sherwin-Williams building. The two parties later reached a compromise under which the developer will install a 24/7 monitoring system in both buildings and a Knox-Box to give the fire department 24/7 access, Roberts said.

The developer also made adjustments to the landscape plan for the property to allow better access for the town’s fire trucks, Roberts said. Originally, Damariscotta DG LLC’s plan called for an island in the middle of the parking lot separating the two buildings. After speaking with Roberts, the developer moved the location of planned light poles and trees and modified plans for the island to allow a fire truck to drive over it.

The developer demonstrated that two entrances to the property – one on Main Street and one on Biscay Road – can accommodate a fire truck, Roberts said.

Another condition required the developer to work with the town to create a sidewalk plan for the property. During previous meetings, both the planning board and the Damariscotta Board of Selectmen expressed a strong interest in the construction of sidewalks as commercial developments move into town.

Recently, however, the developer learned that such an arrangement could jeopardize the town’s ability to apply for and receive federal grant funds for sidewalks on the property, Turner said. The planning board will require the applicant to submit a statement to the Maine Department of Transportation explaining the arrangement. The applicant must also confirm with the DOT that the arrangement will not interfere with the town’s ability to receive grant funds.

In addition, Lisciotti Development Corp. agreed to pay Damariscotta $32,850 for use toward a future sidewalk project along the property’s Main Street and Biscay Road boundaries.

After receiving the update on the project, the board voted unanimously to approve the notice of decision.

After the vote, planning board member Shari Sage asked if the developer has any plans to change the design of the buildings to “look less like a box store and more like a New England ambiance.”

Scribner said the plans have not changed from what the board approved two months ago.

Scribner said he hopes to start construction on the project later this month and complete it by December. Damariscotta DG LLC is scheduled to close on the property within the next couple weeks, he said.