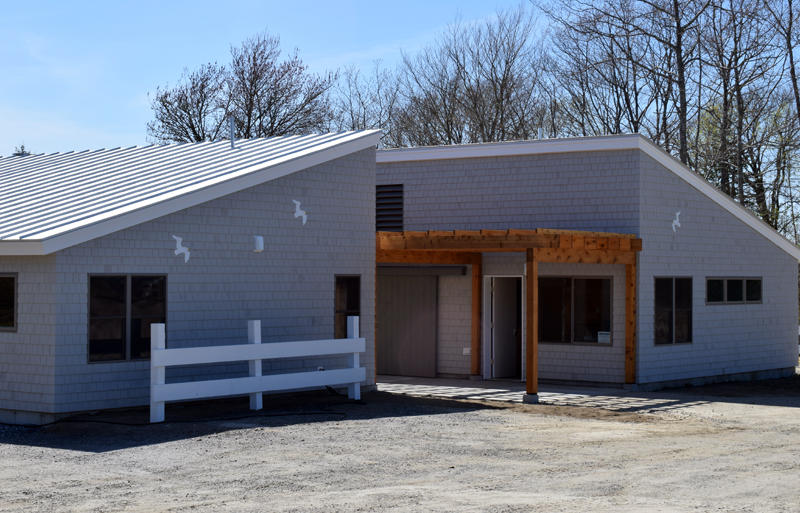 Round Pond contractor Ledgewalker Builders LLC completed the construction of the new Pemaquid Beach Pavilion on Friday, May 15.

Construction on the $900,000-plus project started in early December. Local fire departments burned the old building in an October training exercise.

Ledgewalker Builders LLC owner Paul Leeman III, in a phone interview Tuesday, May 19, said the project went smoothly. He credited the success to close coordination with the Bristol Parks and Recreation Department, a mild winter, and the availability of local subcontractors. All but one of the subcontractors were local businesses.

“I never expected this project to go so smooth,” Sargent said in a phone interview Tuesday. “It’s because we have excellent builders. … We used our stumbling blocks to make the end product better. It was smooth and worked so well because of that.”

Sargent said the builders would frequently check in with the parks department for direction on how to improve an aspect of the project or save money.

The pavilion consists of three separate buildings along a terrace, with benches, showers, and other amenities, as well as a 6-foot-wide boardwalk to the beach.

Leeman sees the 180-foot-long boardwalk as the most important feature of the new pavilion, because it will facilitate easier access to the beach for elderly and disabled visitors. 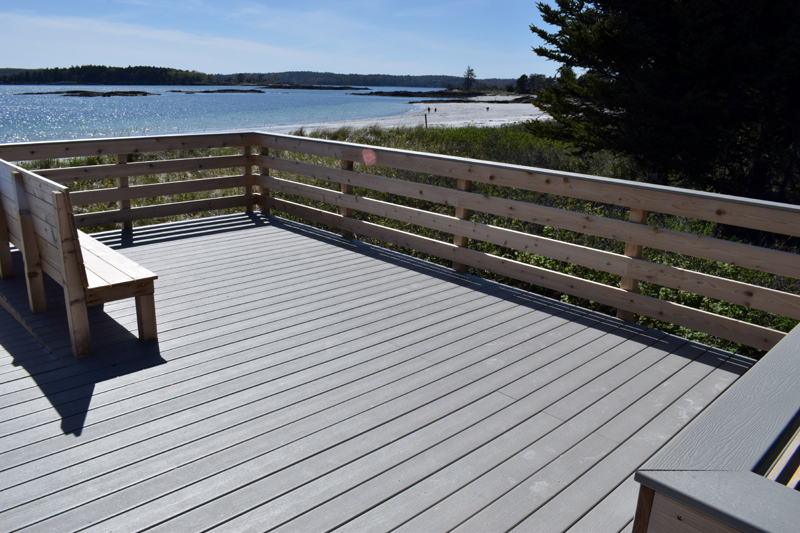 A viewing platform to one side of the new boardwalk at Pemaquid Beach Park. (Evan Houk photo)

The three buildings are joined by a concrete walkway, an open-air eating area, and a pergola made of red cedar that adorns the front entrance. Leeman said these features connect the building into a unified complex.

One building contains an office, male and female changing rooms, each with two showers and restroom facilities, and a family bathroom. There are also two outdoor showers available.

Leeman said the snack shack is bigger than the one in the old building and will have a new hood vent system, a new grill and deep fryers, and an upgraded fire suppression system.

The third building contains a 24-foot-by-24-foot classroom, the Beachcombers’ Rest Nature Center. Coastal Rivers Conservation Trust has operated the nature center in the past, with classes and a weekly touch tank event. Sargent said that because of COVID-19, the building may only house educational displays this year.

The building also contains a 12-foot-by-16-foot kitchenette and dining area that will eventually be available for rental. Leeman said the space will be available for weddings, parties, or other events. 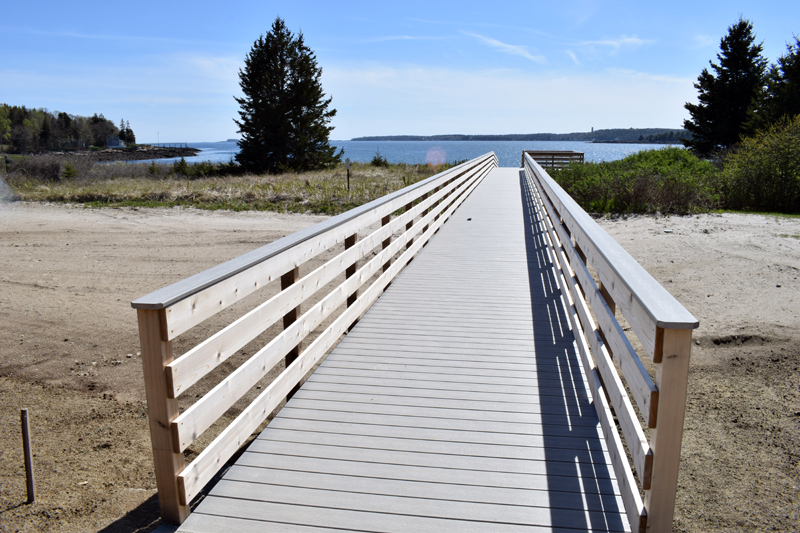 Sargent said the parks department is still determining how this space will be utilized, the cost for renting the space, and when it can be rented. The space may not be available this year because of COVID-19.

Sargent said she has received a lot of positive feedback from Bristol residents about the new pavilion and its appearance.

“We’ve had incredible feedback from the public. Even people who were skeptical said it fits into the landscape,” she said.

Leeman worked on the project with Neal Kimball, of Boothbay-based Highland Building Services, who used to live in Round Pond. “His knowledge of the material trades boded well for the project,” Leeman said.

Other subcontractors include DiMauro Electric Inc., Grindell Plumbing Inc., and Hanley Construction Inc., all of Bristol; and McClintick Foundations Inc., of Nobleboro. 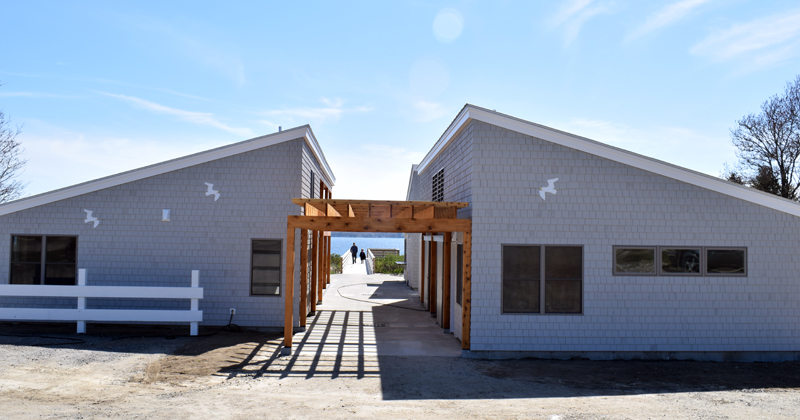 Leeman said he is grateful to have been able to work on such an important local project. He has deep ties to the community and the park, having grown up in a long-established Round Pond family.

His great-grandfather, Clifford M. Leeman, was a Bristol selectman in July 1959 when the town borrowed $50,000 to develop Pemaquid Beach Park. “He was a selectman for many years and also town sheriff,” Leeman said.

In a notable coincidence, the town will again ask voters to borrow $50,000 to fund the completion of the pavilion when annual town meeting is concluded June 16.

Sargent said a special town meeting will take place immediately after the annual town meeting to ask townspeople to borrow an additional $50,000 so the parks department doesn’t have to deplete its reserve account to pay for the pavilion construction. Thus, borrowing will total $100,000. 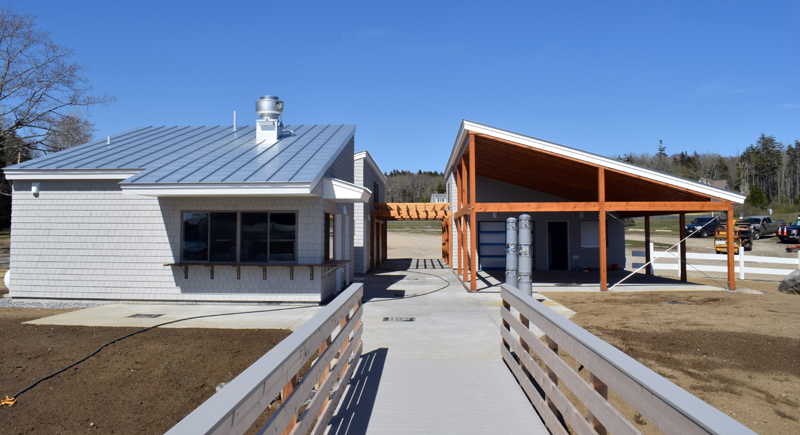 A view of the new Pemaquid Beach Pavilion from the boardwalk, Tuesday, May 19. (Evan Houk photo)

Leeman’s late grandfather, Gordon Benner, chaired the Bristol Parks and Recreation Department from 2001-2015. “He would be very proud of the project, except for maybe the price tag,” Leeman said with a laugh. He said his grandparents spent a lot of time at Pemaquid Beach.

“It was special to do my part there and build something that people can be proud of,” Leeman said. “The first building lasted 50 years, and I hope this one lasts even longer.”

Planning for a new pavilion started in October 2018, according to Sargent. The old pavilion was built in 1960 and was becoming more and more expensive to maintain.

A $300,000 donation and a $300,000 matching grant from the federal Land and Water Conservation Fund constitute the bulk of funding for the project. Other funds have come from parks revenue and smaller grants and donations.

Pemaquid Beach Park will open the last week of June or July 1.