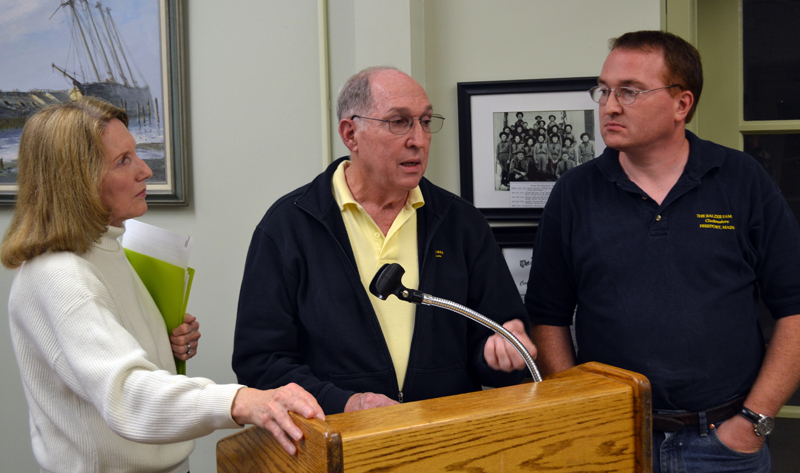 From left: Linda, Rick, and Chris Balzer, of Balzer Family Clock Works, speak with the Wiscasset Board of Selectmen about the town clock Tuesday, Sept. 19. (Abigail Adams photo)

Wiscasset’s town clock, a landmark of the town since 1907, is resting in a steeple with rotting wood, according to Rick Balzer, of Balzer Family Clock Works. “If the tower comes down, it will take the clock with it,” he said.

Balzer Family Clock Works has held the contract to service the town clock for years, but the task has become increasingly difficult due to the private ownership of 155 Fort Hill St., where the clock is located, he said.

Rick, Linda, and Chris Balzer attended the Wiscasset Board of Selectmen’s Tuesday, Sept. 19 meeting to recommend the selectmen consider removing the clock from the steeple and placing it on public display in a town-owned building.

The other option involves investing in the restoration of private property, the Balzers said. “Do you want to invest in that building or your own?” Linda Balzer said.

Captain William Henry Clark purchased the clock from the E. Howard Clock Co., one of the leading clock tower manufacturers of the town. He offered it to Wiscasset on the stipulation that it be kept in good working order, according to old town meeting documents uncovered by Steve Christiansen, Clark’s great-grandson.

The town voted to accept the clock in 1907 and it is currently on display on Fort Hill Street. While the town owns the clock, it does not own the property. The Balzers have been unable to perform proper maintenance on the clock due to issues with accessing the property, they said.

There are also access issues to the clock’s outside gears and hands, Rick Balzer said. He said he committed a “cardinal sin for a clock maker. I had to add more weight to keep it running.”

The town clock is a pendulum-regulated time piece with no electric components, he said.

While the property where the clock is located is privately owned, the town may own the steeple that houses the clock, Selectman Ben Rines said. Janet Hobbs-Bailey owns the property, according to Wiscasset tax records. Hobbs-Bailey could not be reached for comment.

Selectmen took no action related to the Balzers’ recommendation, but agreed to look into the deeds to determine if the town owns the steeple.