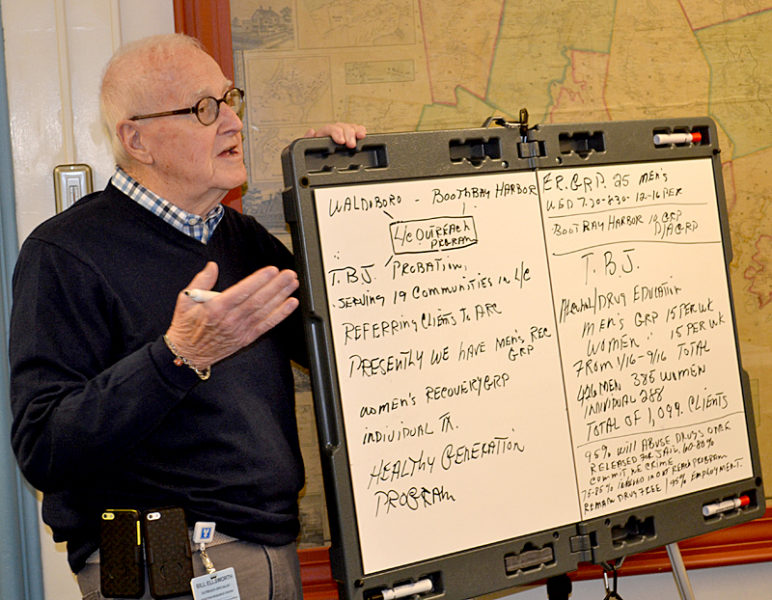 Bill Ellsworth, a recovery coach with the Addiction Resource Center, makes a presentation to the Lincoln County Board of Commissioners on Tuesday, Jan. 3. (Abigail Adams photo)

People who are incarcerated for behaviors and actions that stem from addiction tend to fall into a pattern, Ellsworth said. They are arrested, go to an inpatient treatment facility, come back to the community with no support system, and are arrested again. 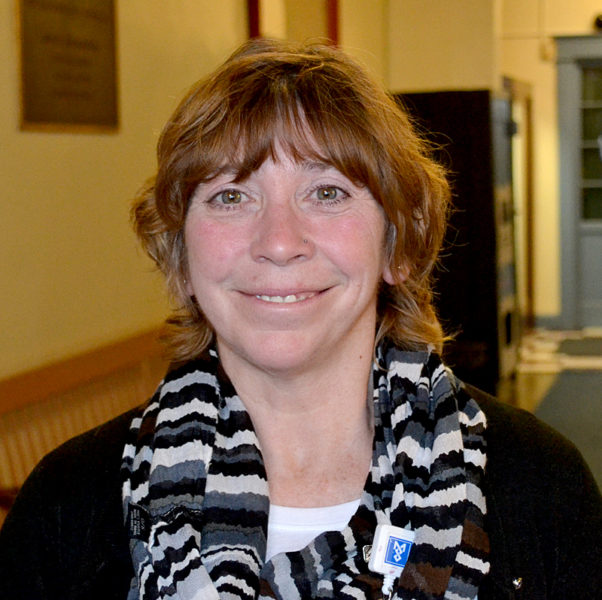 The continued support and outreach Ellsworth and recovery coach Angie Musto are providing is breaking that pattern and enabling people struggling with substance abuse to continue the process of recovery while living in the community, Ellsworth said.

Ellsworth and Musto presented an overview of their work to the Lincoln County Board of Commissioners on Tuesday, Jan. 3.

“Lincoln County is making history,” Ellsworth said. “This has never been done before.”

The care and long-term support provided beginning when an inmate enters Two Bridges Regional Jail and continuing indefinitely after his or her release is unique, Ellsworth said. There are substance abuse treatment and counseling programs in many jails, but that support ends the moment the individual is released, he said.

In Lincoln County, the people Ellsworth and Musto work with have access to continued support, both while incarcerated and afterward, through individual and group counseling, Ellsworth said.

“Their eyes light up. They’re excited,” Ellsworth said, about the reaction individuals have upon learning they will still have access to support after they leave Two Bridges.

A philosophy of safety and respect guides Ellsworth’s and Musto’s work.

“We meet people where they’re at,” Musto said. “We talk about what’s going on in their lives,” not just about substance abuse, she said.

The number of people served in just the past year is staggering, Ellsworth said. A total of 426 men and 385 women attended the weekly men’s and women’s groups and 288 people have participated in individual counseling. Of those people, 75-85 percent have remained drug-free and out of custody, Ellsworth said, which is well above the national average.

“The numbers are overwhelming. We didn’t realize how much we were doing,” Ellsworth said. “But these are the results. We truly believe people can have a better life, and they can. It’s been proven.”

Since the late 1980s, Ellsworth has been the sole recovery coach working through the Lincoln County Sheriff’s Office. The contract with the Addiction Resource Center was expanded in the previous year, which allowed Musto to join Ellsworth in providing support to Lincoln County residents struggling with addiction.

There has been an explosion in the number of women jailed as a result of substance abuse, Ellsworth said. “This is the first year I’ve had help and I can’t tell you how valuable that is,” he said.

At their previous meeting, commissioners voted to approve a $25,000 increase in LCSO’s contract with the center, from about $60,000 to about $85,000 annually. The contract now covers 51 hours a week for Ellsworth and Musto.

In addition to their work at Two Bridges Regional Jail and the sheriff’s office, Ellsworth and Musto have been running an outreach group in Boothbay Harbor, and plans are in the works to start another outreach group in Waldoboro.

People are also beginning to walk in to their office in the basement of the sheriff’s office because they do not know where else to turn for help, they said.

Ellsworth and Musto thanked the commissioners profusely for supporting their work.

“You’re thanking us, but we should be thanking you for your service to the county,” Commissioner Bill Blodgett said. Commissioners questioned whether the current contract is adequate to meet the demand, and encouraged them to return with a request to modify the contract if necessary.

While the two are able to handle the current caseload, the number of people struggling with substance abuse is increasing, Ellsworth said.

“People talk about how there’s (an opioid) crisis, but I feel that treatment is what’s in crisis, because we haven’t been aggressive enough and kept pace with what’s happening today,” Ellsworth said.