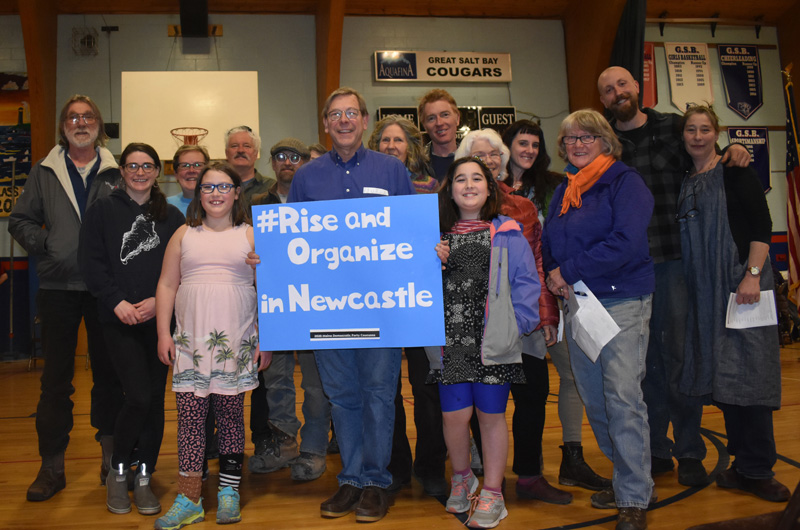 Democratic caucus goers from Newcastle pose for a photo after their caucus at Great Salt Bay Community School in Damariscotta on Sunday, March 8. (Alexander Violo photo)

Great Salt Bay Community School in Damariscotta hosted the caucuses for Bremen, Damariscotta, Newcastle, and Nobleboro. Since Maine now has a presidential primary, the caucuses primarily serve as organizing events for county and municipal party committees, as well as political rallies.

Speakers at GSB urged their fellow Democrats to get out the vote to defeat President Donald Trump and unseat U.S. Sen. Susan Collins, R-Maine, which could help Democrats take control of the Senate.

At the state level, speakers talked about retaining control of both chambers of the Legislature.

Chris Johnson, chair of the Lincoln County Democratic Committee, spoke about the importance of turnout among younger residents.

Johnson said the county party is changing the way it campaigns this year.

“We are going to do more outreach, bring in interns, and really reach out to young voters,” Johnson said.

Johnson spoke on the need for change at the very top of the nation’s government.

Johnson urged caucus goers to volunteer with the party.

“We need your help. Please get involved,” he said.

The first speaker at the caucuses in Damariscotta was state Rep. Chloe Maxmin, D-Nobleboro. Maxmin currently represents House District 88, but is running for Maine Senate District 13.

Maxmin stressed the importance of connecting with people and moving away from politics as usual.

“We are looking to build something really special here in Senate District 13, something that will last way beyond the election – a new kind of politics,” Maxmin said.

Lydia Crafts, of Newcastle, spoke about her family and her experience as a social worker. A mother of two, she said she wanted to run because she is a mother.

“Community-based services are not funded and kids are not getting the services they need,” Crafts said.

Next was David Levesque, an attorney who practices in Damariscotta and resides in Newcastle.

Levesque said his mother was a big proponent of education and he was the first in his family to go to college.

“I am a product of the University of Maine System and I am a big proponent of public education,” Levesque said.

“What I’m seeing now is an erosion of the safety net that helped lift me up and lift my brothers up, an erosion of support for public education,” Levesque said.

Levesque spoke on changes to Maine fisheries and said his family used to catch groundfish, in addition to lobster.

“It’s hard to find groundfishermen. They’re all down in Gloucester, (Mass.), and we’ve lost some great traditions. We need to look at different ways of making a living from the sea, while keeping Maine traditions,” Levesque said.

The final District 90 primary candidate to speak was Wendy Pieh, a farmer and chair of the Bremen Board of Selectmen who served four nonconsecutive terms in the House from 1996-2000 and 2006-2010.

“Maine is a state where you can make a difference. We have got to hold what we have. Reelect a Democratic governor, a Democratic Senate, and a Democratic House,” Pieh said.

Pieh said she found people to work with during her past tenure in the House and thinks she can again.

“I think Mainers in general are open-minded. The six to eight years I was chair of the Agriculture Committee, there were people interested in working together,” Pieh said.

Pieh said she wants to return to Augusta to represent the farmers and fishermen of the district who would rather spend time on their work than lobbying at the state capital.

The final candidate to speak was Wayne Farrin, D-Jefferson, who is looking to take over for Maxmin in House District 88.

Farrin owns the real estate agency Farrin Properties, of Damariscotta, and chairs the Jefferson Budget Committee. He said he has wanted to extend his involvement in public service for years.

“I always wanted to get more involved. I have been involved at the local level for many years,” Farrin said.

Farrin believes he can work across the aisle to get things done for the district and the state.

Farrin talked about the need to support education, including vocational opportunities. He said it is important to keep the cost of prescription drugs down.

“The cost of insulin and other drugs are really hurting the older generation,” he said.