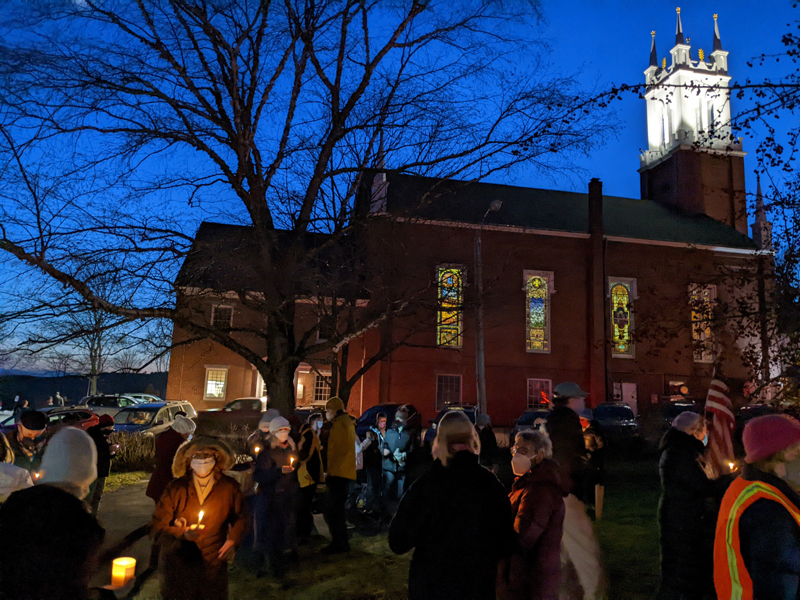 A large group of Lincoln County residents gathered at the Veterans Park in Newcastle on the evening of Jan. 6 to hold a vigil on the anniversary of last year’s U.S. Capitol attack. (Nate Poole photo)

Newcastle’s Veterans Park was lit up with candlelight on Jan. 6 as Lincoln County residents and representatives gathered to hold a vigil on the anniversary of the U.S. Capitol attack and promote federal and state election legislation.

The event, organized by Lincoln County Indivisible, was held at 5 p.m. Thursday, Jan. 6, and saw an attendance of roughly 100 masked Lincoln County residents. It was one of 350 similar events across the country marking the attack at the Capitol during the certification of the 2021 presidential election results.

Five people died as a result of the Jan. 6 attack and more than 100 law enforcement officers were injured. Four officers who were at the Capitol on Jan. 6 died by suicide. 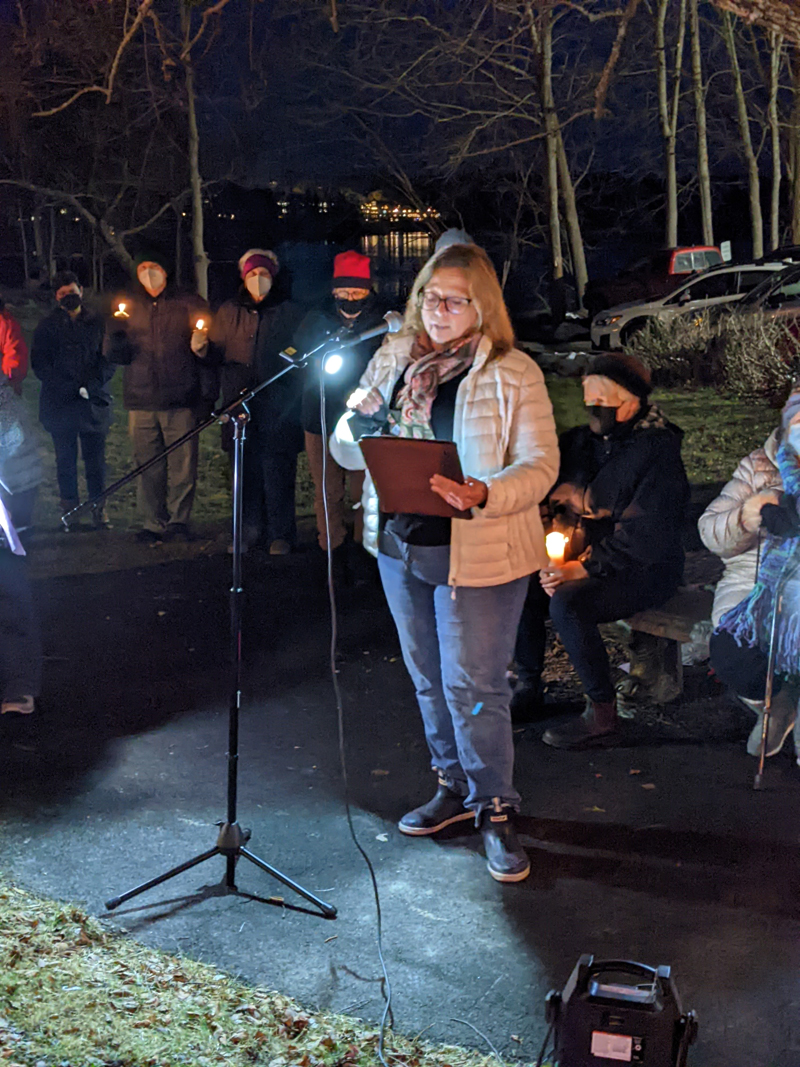 Rep. Holly Stover of Boothbay gives her remarks at the vigil at Newcastle’s Veterans Park on Jan. 6. (Nate Poole photo)

Rep. Holly Stover, who lives in Boothbay and represents Boothbay, Boothbay Harbor, Edgecomb, Southport, Westport Island and part of South Bristol, remarked on the struggle to seek justice for those losses.

“We gather here today for all of those who were killed, who were hurt, and for those who will suffer still… we stand in peace and solemnly grieve the loss of life and the loss of so much potential,” Stover said. “We cannot measure our progress by hatred or divisiveness… but rather by measures of peace and unity that brought each of us here tonight.”

During her remarks, Cray observed that many of those scaling walls and smashing windows at the Capitol last January were often carrying American flags in hand. In an effort to reclaim the American flag as a symbol, she brought one and displayed at the vigil.

“I am really angry that my flag and my patriotism has been co-opted by extremists… who show no interest whatsoever in democracy,” Cray said.

The vigils followed an address by President Joe Biden earlier in the day in which he condemned the Jan. 6 attack and former President Donald Trump for perpetuating the narrative that the results of the 2021 election are illegitimate.

Another purpose of the event was to promote election legislation, including The Freedom to Vote Act, The Protecting Our Democracy Act, The John Lewis Voting Rights Advancement Act, and action to promote Washington, D.C. statehood.

The three bills are designed to make voting more accessible and elections more secure and transparent. The Protecting Our Democracy Act is designed to limit abuses of power by the president and adds more checks and balances on the executive branch.

Advocates in Maine connected to the vigils are also calling for the passage of L.D. 1155, “An Act To Require Election Transparency and Audits,” which would see the state join 34 others in conducting post-election audits. 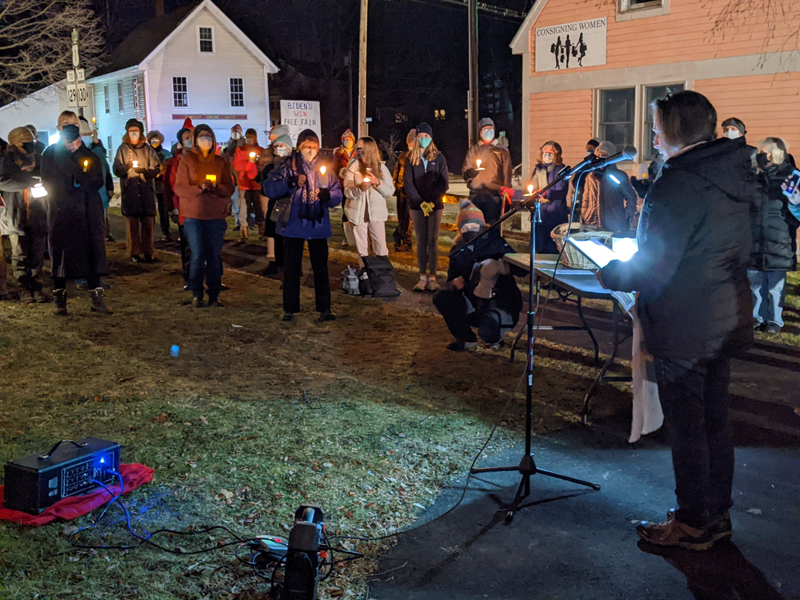 Rev. Charlene Corbett of Newcastle’s Second Congregational Church leads attendees in a prayer at the vigil at the Newcastle Veterans Park on Jan. 6. (Nate Poole photo)

“As we gather here tonight, as we move into 2022, as we bear witness to the events of January 6th, 2021 … we crave and need to ensure free and fair elections for our entire country,” Crafts said during her remarks.

Crafts, who lives in Newcastle and represents Bremen, Bristol, Damariscotta, Newcastle, part of Nobleboro, part of South Bristol, Monhegan Island, and Louds Island, said that she attended the vigil because she saw it as a way of “moving forward in a productive way” without focusing on the anger and pain Americans felt following Jan. 6, 2021.

At the end of the evening’s proceedings, Corbett offered up a prayer for those who died as a result of the events on Jan. 6, for their loved ones, and for those in vehement opposition in the aftermath.

“We must go home by another road than the destructive and violent one we currently travel as a nation. We must pledge with complete self-giving to leave nobody behind if we are truly to be the United States we claim to be,” she said.

Other Maine communities, including Portland, Lewiston, Bangor, Bucksport, Camden, and Farmington held similar vigils organized by a variety of state and local advocacy groups, including other Indivisible organizations based in the state.

Indivisible is a national conglomerate of a 501(c)(3) nonprofit, 501(c)(4) social welfare organization, and political action committee associated with separate local organizations across the U.S. According to the organization’s website, Indivisible groups’ goals are to “resist the GOP’s agenda, elect local champions, and fight for progressive policies.”