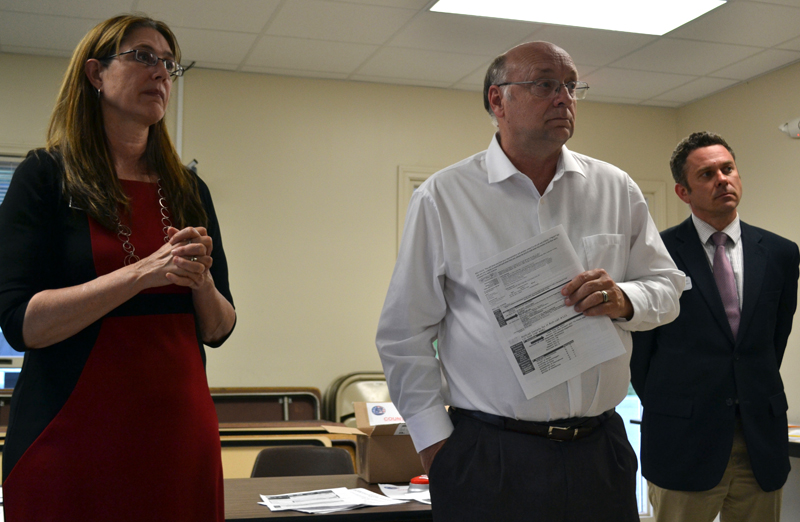 There is tremendous activism to elect representatives who stand for less government, lower taxes, and civil liberties during election season, “but then we tend to walk away and hope for the best,” said Mike Quatrano, director of civic engagement at the Maine Heritage Policy Center, a conservative think tank.

Quatrano, state Sen. Dana Dow, R-Waldoboro, and state Rep. Deb Sanderson, R-Chelsea, spoke to the Lincoln County Republican Committee in Newcastle on Wednesday, May 24 about the importance of grass-roots activism in the legislative process.

Sanderson is one of six Republicans on the Health and Human Services Committee “holding back the tide” on a slew of bills that would expand Medicaid and welfare and increase the state budget, she said. “We need your help and we need your presence.”

The “chronically underfunded” Department of Health and Human Services has stabilized its budget, and the department’s reliance on supplemental funding requests has come to an end, Sanderson said.

“Kudos to LePage and (DHHS Commissioner) Mary Mayhew” for the reforms that have kept the department “above water and out of the red,” Sanderson said. Sanderson said she was “grateful” to Mayhew, who resigned effective Friday, May 26, “for putting the department back on track.”

The “structural gap” is the difference between projected revenues and expenses the governor must address to deliver a balanced budget, according to the Bangor Dailey News.

Under LePage, Maine has reduced the structural gap that has existed at the beginning of every biennial budget from $1.2 billion to $165 million, according to the Maine Department of Administrative and Financial Services. 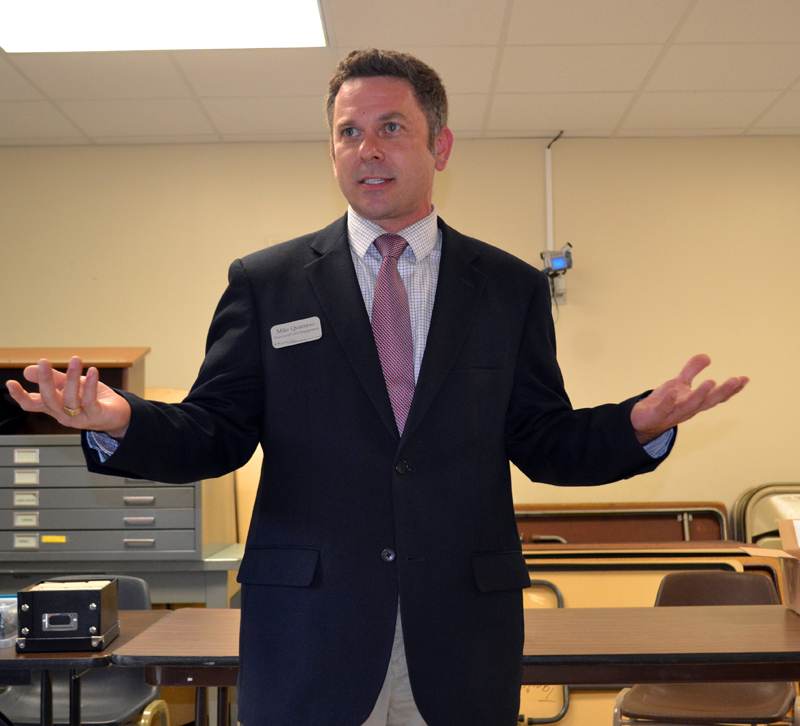 Due to the fiscal constraint of the LePage administration, the state is beginning the fiscal year with $1 billion in its general fund to cover its future expenses, and the Legislature’s practice of funding more programs than the state can afford is changing, Sanderson said.

There is still “a little fantasizing” when it comes to allocating funds for programs, “but not as much as there used to be,” Sanderson said.

However, the Legislature is in the midst of a battle over the biennial budget, with Republicans sticking firm to Governor Paul LePage’s $6.8 billion budget and Democrats calling for a $7.5 billion “I have a dream” budget, Dow said.

With current revenue projections, the money to fund Democratic initiatives is not there, Dow said.

The Legislature has until midnight June 30 to establish the biennial budget. Legislation with fiscal notes, or costs, not included in the budget will likely be decided in “the last half of the last day” of the budget approval process, Dow said.

However, a budget bill “is a bill just like any other bill,” Sanderson said. “You can be a part of the process.”

Sanderson walked those in the attendance through the legislative process that either kills legislation or turns it into law, highlighting key points where grass-roots advocacy can make a difference. 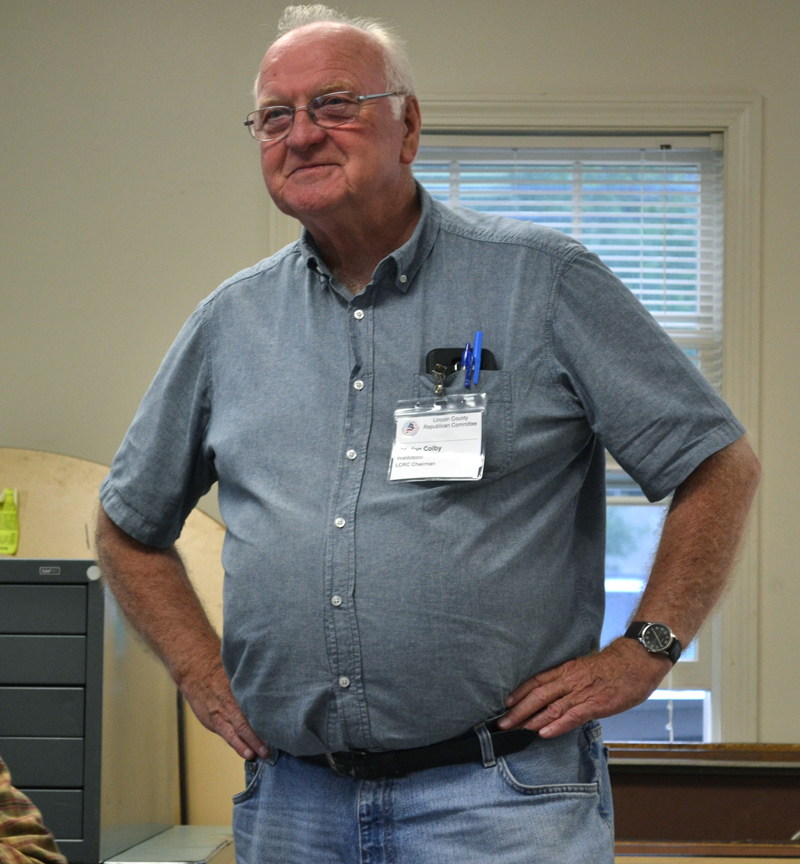 Lincoln County Republican Committee Chair Gordon Colby calls the May meeting of the committee to order in Newcastle on Wednesday, May 24. (Abigail Adams photo)

In considering legislation to expand Medicaid, the Health and Human Services Committee hears from hundreds of advocates pushing to expand programming, Sanderson said. “No one is there to represent the other side, the taxpayer,” she said.

While less than 30 citizens have turned out to testify against expanding programming, “the good news is, most of them were from Knox and Lincoln counties,” Sanderson said. She credited Lincoln County Republican Committee Chair Gordon Colby for encouraging the involvement.

The Maine Heritage Policy Center is working to promote legislative advocacy statewide, Quatrano said. In brainstorming how to promote the principles of less government and taxation, and more individual liberties, the center created a guidebook for the 128th Legislature with 75 ideas for legislation.

Of those 75 ideas, 40 bills were created, 26 of which were reported out of their respective committees and will go to a vote, Quatrano said.

Inspired by the speeches, Colby proposed that the county committee brainstorm ideas for legislation, find sponsors, and follow the bills through the legislative process. “When I got involved, I got involved to make a difference,” Colby said.

Legislation requiring school-choice towns to pay tuition for students to attend faith-based schools would be a good place to start, Colby said. “They always say we can’t because of statute,” Colby said. “Well, let’s change the statute.”

Dow’s decisions in the Legislature are heavily influenced by his Christian principles and lessons from the Bible, he said. In introducing Dow to the committee, Colby read an email from Carroll Conley, the executive director of the Christian Civic League of Maine.

Dow was hailed for his impromptu testimony against L.D. 347, “An Act to Support Death With Dignity,” in the Senate on May 18.

“I was astonished to hear someone stand in the middle of the Senate floor and declare that he would be persuaded by nothing other than arguments aligned with a biblical worldview,” Conley wrote.

“To hear the name of Jesus Christ evoked in anything other than a curse word or a prayer (and even that is rare) was truly startling,” Conley said. The legislation passed the Senate but was defeated in the House of Representatives.

“The floor debate in the House included several bold expressions of faith, morality, and conscience. It would not surprise me at all to learn at some point that those speeches were inspired by Sen. Dow,” Conley wrote.

Members of the Lincoln County Republican Committee also thanked Dow for his speech. Dow, Sanderson, and Quatrano were peppered with questions about steps that could be taken to eliminate the referendum process, become involved in the budget debate, and support their work in the Legislature.

Republicans are well-represented in Maine, Quatrano said. “With a few calls, emails, and social media tags, you can move the needle a lot,” he said.