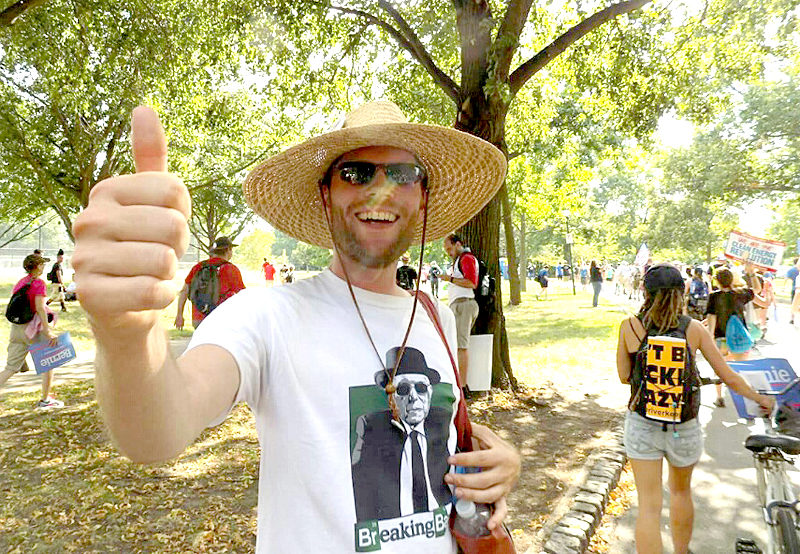 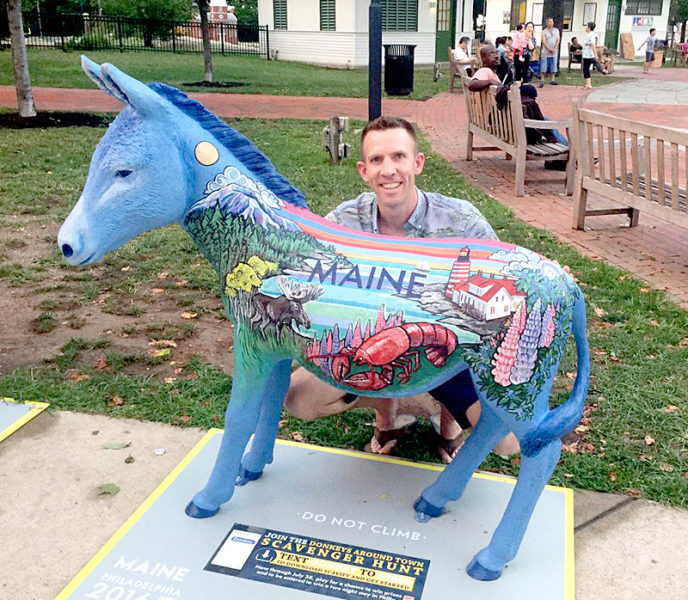 The battle in the primary between Bernie Sanders and Hillary Clinton came to an end in Philadelphia on Thursday, July 28. Members of the Lincoln County Democratic Committee and the Maine Democratic Party experienced the Clinton nomination from opposing sides of the fence.

On the other side of the fence from the protests, Maine Democratic Party Chairman Phil Bartlett, a former state senator, was inside the Wells Fargo Center, where the convention was held, as one of Maine’s five superdelegates. Bartlett announced Maine’s roll-call vote of delegates, which Sanders won 18-12.

Maine’s superdelegates, however, narrowed Sanders’ margin of victory in Maine. Bartlett was one of four superdelegates to throw their support behind Clinton – support Bartlett did not announce until late in the primary process, when it became clear that Clinton had won the nomination, he said.

Maine will be targeted by the Democratic National Committee, Bartlett said, with ground canvassers and field organizers planning to cover every corner of the state to turn out the vote for Clinton.

For Papineau, a 32-year-old, self-described progressive Democrat whose involvement in the party was inspired by Sanders, the primary process that resulted in the Clinton nomination was “painfully and obviously unfair,” he said. While he is not necessarily opposed to Clinton, if Clinton wants his vote, she must earn it, he said – something she has yet to do.

His experience at the convention, however, has energized him to ensure Question 5, the ranked-choice voting initiative, passes in November. The system “allows voters to go with their conscience first,” Papineau said. “There’ll be no more voting for the lesser of two evils.”

Papineau, a Boothbay Harbor native, returned to his hometown because of Bernie Sanders. Papineau became familiar with Sanders through Thom Hartmann’s radio program segment “Brunch with Bernie.” “I knew after five minutes, Bernie spoke for me,” Papineau said.

Papineau was living and working in New Zealand when Sanders announced his presidential bid. Papineau promptly packed his bags and returned to Boothbay Harbor to support Sanders’ campaign. He is now more politically active and engaged than ever before, something he credits to Sanders.

“Bernie is a movement, it’s an idea,” Papineau said. “It’s the idea that people should have a voice and government should work for the welfare of the people.”

Sanders connected with and energized a younger generation known for their apathy toward the political process, Papineau said – in Philadelphia, Papineau was surrounded by thousands of them. “I never thought that we were going to win the convention,” he said, “but we met each other and made alliances. I gained a new family.”

Papineau stood outside a fence separating protesters from the Wells Fargo Center and chanted and waved his handmade sign in the crowd. The atmosphere in the crowd was electric during the first two days of the convention, he said.

On Wednesday, July 27, when Sanders released his delegates to vote for Clinton, a sense of defeat swept through the protest, he said. “It was heartbreaking,” Papineau said. Soon after, the sky opened up and it began to pour on the protesters.

“It was like poetry,” Papineau said. “Everyone was sad, depressed, defeated, and then soaking wet.”

The final day of the convention, the crowds of protesters dissipated; at the fence where thousands stood the day before, there was a lone Bernie Sanders sign lying on the ground, according to Papineau.

Despite the protests coming to an end before the final day of the convention, Papineau’s participation invigorated him to continue to work for the ideas Sanders stood for. He plans to work in support of campaigns for local Democratic candidates and for ranked-choice voting in Maine.

For Bartlett, the experience inside the convention was also electrifying and invigorating. Bartlett remained neutral throughout the primary process until California’s primary results cinched the nomination for Clinton, he said.

While he received many phone calls urging him to throw his support behind Sanders, Bartlett was clear that he would support whoever the presumptive nominee was all the way through to November.

According to Bartlett, the controversy surrounding the hacked emails that indicated the Democratic National Committee had a bias toward Clinton was largely settled when former Chair Debbie Wasserman-Shultz resigned.

“I think that was met very positively,” Bartlett said. “We are a party of inclusion and everything we do should be to encourage and make it possible for Democrats to run for office. The emails really cast a shadow over the good work happening across the country.”

The Sanders campaign greatly contributed to the democratic process, Bartlett said, and the Democratic Party now needs to do what it can to continue to engage Sanders supporters.

Bartlett encouraged those Sanders supporters in Maine who are not enthusiastic about the Clinton nomination to work to elect progressive Democrats to the Legislature.

Papineau already appreciates the importance of engaging on the local level and encourages other Sanders supporters to do the same. His generation has a cynical and apathetic attitude toward politics, he said.

“I want to change that,” he said. “I’m going to become more engaged and lead by example.”