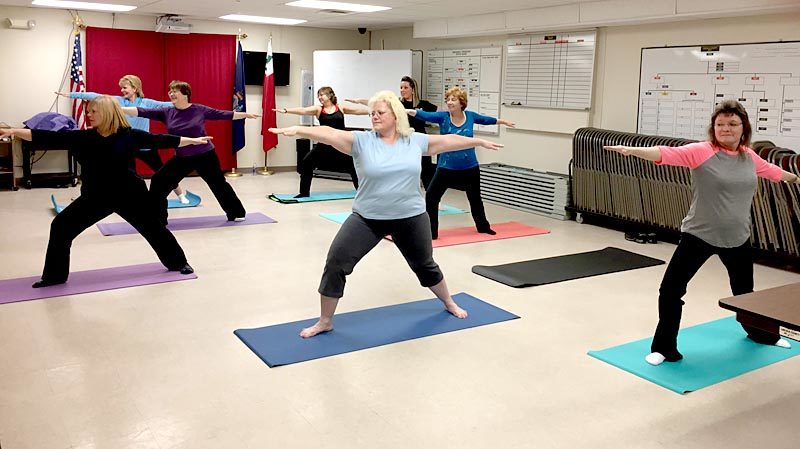 A recently rejuvenated Lincoln County Wellness Committee has launched a variety of programs for county employees that focus on their physical, emotional, financial, and social health and well-being.

The committee has existed since 2013, but did not initially attract a lot of interest or participation from county employees and was “fizzling out,” Lincoln County Administrator Carrie Kipfer said.

With several new county employees inquiring about the wellness committee, it regrouped in the late spring of 2016 with a representative from each county department meeting monthly to brainstorm innovative ways to promote health and wellness, Kipfer said. Because many county jobs are “sedentary,” the committee explored activities that would get people moving, she said.

“We’re looking at the whole spectrum of how a person can be well, and you see the difference in people,” Kipfer said. “I see people walking around the courthouse together that I never would have associated.” The wellness programs are creating camaraderie among employees, one of several benefits already experienced by the county, Kipfer said.

The Maine Municipal Association offers a variety of health education and wellness workshops. Because the county buys health insurance through MMA, it can access grant funds available to support health and wellness activities, Kipfer said. The county received $3,000 in grant funds for 2016, which the committee used to purchase Fitbit exercise bracelets for interested employees.

Employees interested in participating in a Fitbit exercise bracelet challenge were asked to place a $100 deposit on the purchase of their bracelet, Kipfer said. Those who complete the challenge will have their deposit returned and will be able to keep the bracelet. In January, county employees were challenged to walk the full length of the Florida Keys, Kipfer said.

In addition to the countywide challenge, employees with the bracelets can send personal challenges to each other, such as who will take the most steps in a day.

“It’s getting competitive in a really fun way,” Kipfer said. “People are getting creative and finding ways of taking steps and exercising without leaving their desks.”

The activity is especially important for dispatchers in the Lincoln County Communications Center, who have long work shifts sitting in front of a computer, Kipfer said.

The program was so popular, employees who hadn’t planned to participate bought their own Fitbit bracelets so they could engage with their co-workers, Kipfer said.

In addition to the Fitbit challenges, the county has scheduled Maine Municipal Association workshops, which cover topics such as healthy eating and financial well-being.

The county has also brought in a variety of alternative health and wellness classes and activities. A weekly yoga class is now offered in the communications center, and the county has brought acupuncturists, massage therapists, and reflexologists in for sessions.

Practitioners either offer their services for free, or employees who wish to participate in a program pay the practitioner directly. There is a charge for the yoga class, but the county was able to work with a newly licensed massage therapist interested in expanding her practice to provide massage therapy for free, Kipfer said.

The county has also launched its own challenge to continue to build the camaraderie of county employees. In a co-worker challenge developed by the county, employees were asked to write eight facts about themselves that co-workers might not know, Kipfer said.

The “clues” were distributed throughout the departments and employees used the clues to guess the corresponding person, Kipfer said. The game created such excitement among the departments, the county is doing it again – this time with increased pressure and competition among employees to “remain hidden,” she said.

Positive relationships with co-workers are just as important to health and wellness as physical activity, Kipfer said. “If you come to work miserable, it affects your co-workers,” she said. “You spend a lot of time with your co-workers. The camaraderie benefits everyone.”

Each program is voluntary, and programs are open to the state employees who work in the courthouse as well as county employees. “It’s nice to see people interact and want to be more physically and mentally fit,” Kipfer said.

There has been such interest in the programs, employees from other counties are asking about it, and there may be a need to add another yoga class, Kipfer said.

“I want to commend the employees that are putting the effort in, because if it wasn’t for them, this wouldn’t be successful,” she said. “I really want to thank the committee for making this happen.”

The county expects to receive new grant money for 2017, but the wellness committee has not yet decided what to do with it, Kipfer said. The rising cost of health insurance is a concern for county employees, so the committee is looking at ways to be proactive with health to control health insurance costs, she said.

The grant funds are not enough to offer a group membership plan to a YMCA or similar facility, which the committee discussed as an option, so efforts will continue to identify services that can be provided for free and programs that can be implemented in a cost-effective manner to benefit as many employees as possible, Kipfer said.

“We want to have a plan for what to do with grant money instead of just using it randomly,” Kipfer said. “We want to direct it” to continue to support the health and wellness of county employees, she said.