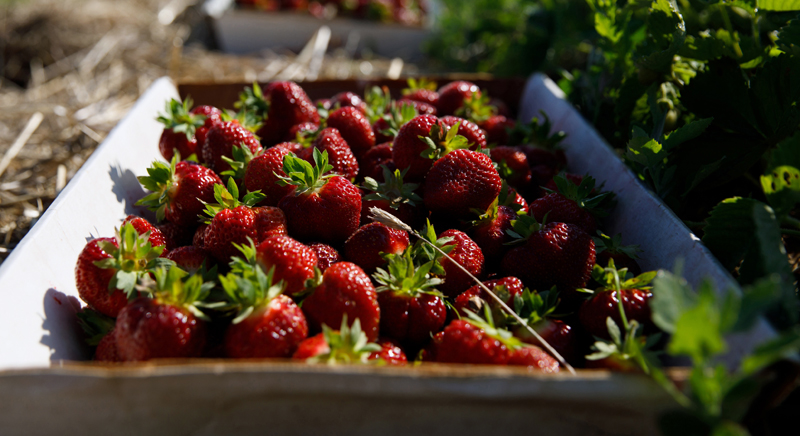 A bin of freshly picked strawberries in a field at Sheepscot General. The farm has been offering pick-your-own stawberries since July 3. (Photo courtesy Ben Marcus)

Lincoln County strawberry farmers are reporting a late and short season – with especially brief pick-your-own opportunities – as the Maine strawberry season draws to a close.

Popp Farms, of Dresden, opened its pick-your-own fields July 7. On July 11, the farm announced on Facebook that the fields were closed for the season.

Clark said the farm is having a full strawberry season this year, with plenty of strawberries to keep both farm stands well-stocked. The season just came later, he said, explaining that the farm usually starts picking strawberries around June 15 and this year it didn’t start until July 1.

“It’s just a shorter season for us,” Clark said.

By Tuesday, July 23, Clark Farms was almost out of fresh strawberries, according to an employee, signaling the imminent end of the season.

Sheepscot General, in Whitefield, ran a pick-your-own operation starting July 3 with moderate success, according to Ben Marcus, who co-owns the farm and general store with his wife, Taryn Marcus.

Taryn Marcus said by email that last year, strawberry picking started June 22, and it always lasts for three weeks. She said 8,000 pounds have been picked so far and the farm has a goal of 12,000.

The last day for strawberry picking at Sheepscot General was Tuesday, July 23.

Ben Marcus said this year’s was a “middle-of-the-road” crop for the farm, but it was better than the last two years.

He said the dryness thinned out his strawberry bushes during the previous two seasons, so he set up drip irrigation this year to make sure they got enough water. He ended up not having to use the new system, however, because of all the spring rain.

According to Daniel Popp, of Popp Farms, his primary- and secondary-year plants did not yield any strawberries. This left only his third- and fourth-year berries, which are smaller and come later in the season.

Strawberry plants can be reproduced year after year by cutting off and planting their runners, or stolons.

“There’s about 50 cars here,” Popp said on the farm’s first day of pick-your-own, July 7. “They could clean us off in about an hour. There won’t be anything left. But that’s alright, another three days, we’ll have some more … but it’s probably only going to be the smaller, later ones.”

“I’ve never, ever seen it like this. … I’ve never seen strawberries do this,” Popp said.

Clark said he did not have any yield from his primary or secondary crops either. 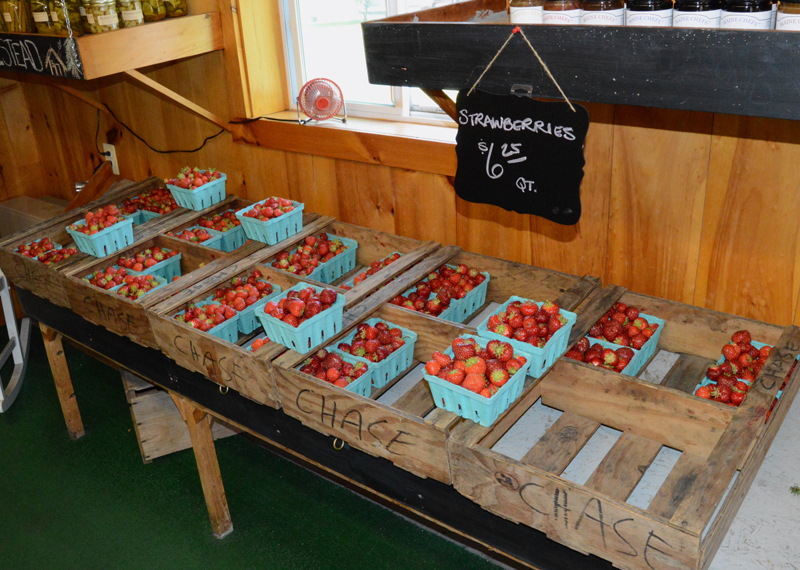 Fresh strawberries at the Clark Farms stand in Damariscotta. The farm did not offer a pick-your-own option this year, but owner Robert “Jigger” Clark said it will still have a full strawberry season. (Evan Houk photo)

“The plants came up and looked beautiful, but didn’t produce any berries. We only got about a fifth of our crop. … The roots are more established and further out after two or three years,” Clark said.

To catch up, Clark said the farm planted 15,000 more plants on 2.5 acres last month, for harvest next year.

Marcus, of Sheepscot General, said he plows and replants his strawberry fields every year, rather than using multiple-year roots.

He said he plants three fields a year that become ready at different times, and that once they are picked out, the season is over.

He said the strawberry plants aren’t the biggest he has had in nine years of farming, and they aren’t the smallest either.

Both Popp and Clark theorized that the extended cold this spring led to complications.

“They didn’t blossom very good in May because of the cold weather. No bees could come out. It was too cold to leave the hives to pollinate the strawberries,” Clark said.

“We never got any warm days in April and it kept the ground frozen. They never thawed,” he said.

Clark, like Ben Marcus, noted the extreme weather of recent seasons and the need for more irrigation during last year’s dry strawberry season.

Popp said a frost sometime in spring must have made its way down into the buds of the plants, but he can’t pinpoint when it would have happened.

“The winter was not terribly cold, but it was reliably cold. It never got warm,” Popp said.

He noted that once the strawberry blossoms begin to open, they can only withstand 30-degree temperatures. But with a tight bud, they can stand 26-28 degrees.

Ben Marcus agreed, saying the freezing and thawing process that happens underneath the soil causes frost heaves and winter kill.

He said that after farming strawberries for nine years, he has learned that it is worthwhile to use generous amounts of mulch and straw to insulate the strawberry bushes.

Popp said some farms use a “frost-for-frost” method of protecting the buds.

“When the temperature gets to 33, 34, they turn on the sprinkler system and it forms a coat of ice on there,” Popp said.

He said the coat of ice protects the berry from freezing on the inside. Then the water has to be kept running until the ice melts off.

David Handley, a vegetable and small fruit specialist and cooperating professor of horticulture for the University of Maine, confirmed these observations, saying more strawberry, blueberry, and raspberry farms have suffered winter kill this year than normal. He pointed to the increased rain in the fall and the sudden cold that followed.

Handley also said the snowfall in early November caught a lot of strawberry farmers off guard, coming before they had fully mulched and insulated their plants from the cold and frost. He also said the season in southern Maine came later and has been shorter than usual.

Handley has been based at Highmoor Farm, the Maine agricultural and forestry experiment station in Monmouth, since 1983.

For all the guessing, all three farmers and Handley admitted they can never know for sure what might have gone wrong, or right, because of all the factors that go into farming. All a farmer can do, they say, is learn and try to do better next year.

Ben Marcus said, of eating a freshly picked strawberry, “It’s like freezing a moment in time.”

With strawberry season at its end, Lincoln County residents will have to wait until next year to capture that brief moment again.