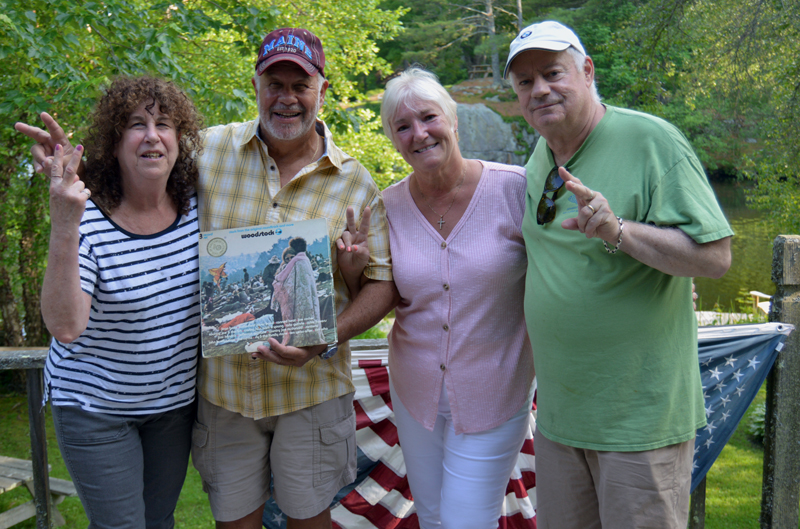 Nick and Bobbi Ercoline, the couple embracing on the cover of the Woodstock concert album and still happily in love after 50 years, recently vacationed in Lincoln County, staying at the Mill Pond Inn in Nobleboro.

According to Nick Ercoline, the couple had an offer to take an all-expenses-paid trip to Switzerland for a Woodstock 50th anniversary event, but decided to visit friends in Maine for the Independence Day weekend instead.

Bobby Whear, who owns the Mill Pond Inn with his wife, Sherry, and is an avid music fan, was thrilled to host the couple.

“Aren’t they such nice people?” Whear said before playing the live Woodstock album on his stereo during a July 5 interview at the inn.

As Santana’s drum-heavy rendition of the all-instrumental “Soul Sacrifice” played in the background, Nick talked about all the buzz the 50th anniversary has brought for the couple.

Nick said the couple has received interview requests “every other day” this year, as 50th anniversary celebrations happen around the world, and their escape to Maine came as a welcome respite from the attention.

He said the Mill Pond Inn is one of the better bed-and-breakfasts they have visited in their travels.

The couple attended the Round Pond parade on Independence Day and dined at Glidden Point Oyster Farms in Edgecomb the following night.

“We loved every minute of it,” Nick said of his time in Maine.

The couple could profit from their fame if they wanted to, but that would “go against the spirit of the whole thing,” Nick said in reference to Woodstock, the August 1969 music festival with the slogan “three days of peace and music.”

When the couple was in Maine, they had several upcoming television appearances scheduled, on the “Today” show, CNN, and “CBS Sunday Morning.”

The couple will attend the four-day celebration of Woodstock’s 50th anniversary Aug. 15-18 at the Bethel Woods Center for the Arts, on the site of the original festival in Bethel, N.Y.

Nick said he and Bobbi first met weeks before Woodstock, when he was tending bar at Dino’s Bar and Grill in Middletown, N.Y., possibly the same Dino’s made famous by Thin Lizzy in the song “The Boys are Back in Town.”

He said Bobbi was standing by the bar right in front of him after the man she was with left her, without a word, for the Jersey Shore. Then, according to Nick, he asked her out and “that was it.”

They drove to Woodstock with Nick’s friend, Corky, in his 1963 Chevrolet Impala, white with red interior. Nick said they did not realize what they were getting into; they thought they were just taking a drive to check out a concert.

The couple was surprised to become trapped in the giant mass of over 400,000 people and endless vehicles clogging the roads to the festival.

Nick said they had to park their car on the highway about 5 miles from the festival site and walk in, such was the congestion.

The rush of cars going to the festival shut down the New York State Thruway for a time.

Nick said that when cars started arriving, the police searched every car for drugs, contributing to the bottleneck leading into the festival.

Bobbi Ercoline said the couple only stayed for one day and only Nick braved the crowd to get to the front of the stage.

Looking at the centerfold of the Woodstock album, which depicts a view of the crowd from the stage, Nick pointed to where the couple was stationed, far up on the top left of the picture, at the back of the massive audience.

A June 2018 article on The Vintage News website describes the circumstances surrounding the photo.

It was early Sunday morning and Jefferson Airplane was beginning its set as the sun rose. Burk Uzzle, a photographer for the Magnum Agency, spotted the Ercolines embracing under a mud-stained pink-and-white comforter, a calm moment in the midst of the chaos visible in the background.

The Ercolines didn’t know their picture had been taken. A year later, their friend, Corky, brought them the Woodstock album and they saw themselves on the cover.

“Woodstock was done,” Bobbi told The Vintage News. “We’d tell our friends we were on the cover and they’d say, ‘Oh, well. Where should we go for dinner?’”

In the July 5 interview, Bobbi added that, despite all the fond recollections of the event today, Woodstock was not originally thought of as a positive occurrence.

“For the first 20 years or so after Woodstock happened, it was not remembered fondly. It was devastating to Sullivan County. This was a rural farm community and just the amount of trash left behind … there were hundreds of abandoned vehicles,” Bobbi said.

But now, 50 years later, Woodstock stands as a pivotal moment in popular music history, as well as a definitive event for the larger counterculture generation of the 1960s.

Nick said the spirit of Woodstock represents, for him, “change for the better” and “peaceful protest.”

“We can’t wait to come back,” Nick said of the couple’s time in the Midcoast.