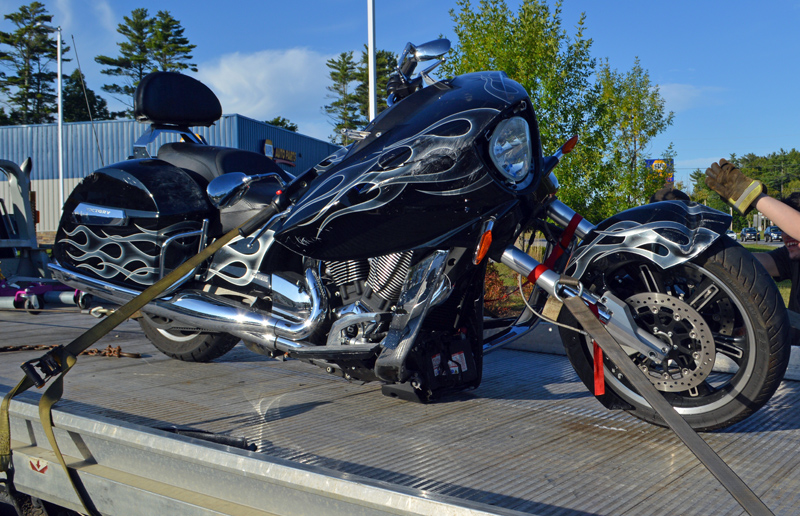 A 2003 Victory Cross Country motorcycle is towed from 695 Bath Road, Wiscasset, after a collision with a Subaru Impreza on Route 1 the afternoon of Sunday, Sept. 15. (Evan Houk photo)

A husband and wife were taken to Mid Coast Hospital with non-life-threatening injuries after a collision with a car on Route 1 in Wiscasset the afternoon of Sunday, Sept. 15.

Jeffrey L. Spicer, 60, of Harpswell, was operating the 2003 Victory Cross Country motorcycle south on Route 1. His wife, Holly Spicer, 58, was a passenger, according to Wiscasset Police Officer Levon Travis. Austin Delano, 20, of Wiscasset, driving a silver 2004 Subaru Impreza, was attempting to make a left turn out of 695 Bath Road, where there is a McDonald’s, a Shell gas station, and other businesses.

Delano turned into the path of the motorcycle, which struck the rear of his Subaru and spun out, according to Travis.

The Spicers were taken to Mid Coast Hospital in Brunswick by the Wiscasset Ambulance Service. Jeffrey Spicer was complaining of pain in his wrist and ribs, Wiscasset Police Chief Larry Hesseltine said.

Blagden’s Garage removed the motorcycle. The scene was clear by 5 p.m.