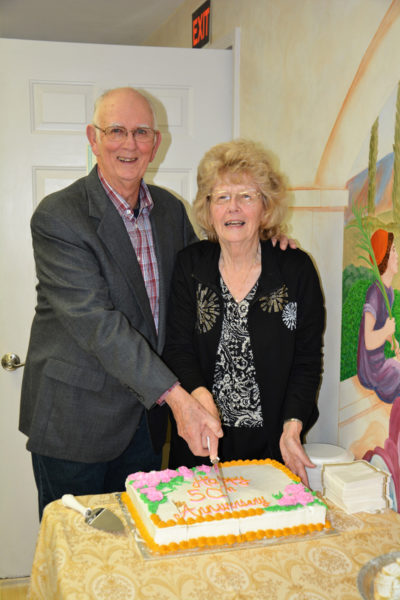 Dana and Rita Simmons cut the cake at their golden wedding anniversary celebration on Dec. 3 at Bremen Union Church, where they were married in a candlelight service 50 years ago. (Photo courtesy Lynn Carlson)

Rita and Dana Simmons celebrated their golden wedding anniversary on Dec. 3 at the same Bremen church where they were married in a candlelight service 50 years ago.

The couple, who lives half the year in the Knox County town of St. George and half the year in Florida, celebrated with a short noontime service at Bremen Union Church in honor of the vows they exchanged there five decades earlier. The service was followed by a get-together in the church hall.

“I planned it all and had the service at the Bremen Union Church, where we had been married Saturday, Dec. 3, 1966,” Rita Simmons said recently, as she and her husband were busy packing for their annual trip to Florida. “It was such a special day to share with family and friends. Pastor Kathleen Maclachlan did a very lovely service, but we chose not to redo our vows as we figured they worked the first time, so leave them alone.”

The couple’s best man, Preston Beal, attended the recent service, as did Rita’s sister and maid of honor, Elaine Simmons (Elaine coincidently married a man with the last name of Simmons who is not related to Dana). Bridesmaid Linda Masters also attended the Dec. 3 service.

Rita told the story of how she met Dana.

“I moved to Connecticut right after graduating from Lincoln Academy in 1965,” she said. “Dana’s cousin Lorraine graduated the year before me and went to Hartford, Conn. to work at Travelers Insurance. Her roommate, Nancy, moved out, so she invited me to come share the apartment and split the rent. She introduced Dana and me – and it was love at first sight!”

Lorraine, who was a bridesmaid at Rita and Dana’s wedding, passed away prior to the service Dec. 3. “We lost Lorraine this year on Mother’s Day, so sadly she was not at our 50th celebration,” Rita said.

Rita explained how she and Dana chose Dec. 3 for their wedding date. “We picked Dec. 3, as we decided not to wait until June,” she said. “We wanted to be together, and back then there was none of the move-in-together-without-getting-married stuff!”

She said she and her husband have lived in a number of states over the years: Maine, Florida, Louisiana, Texas, and Connecticut. Dana’s military career piloting ships for the U.S. Coast Guard took them to those places, Rita said. 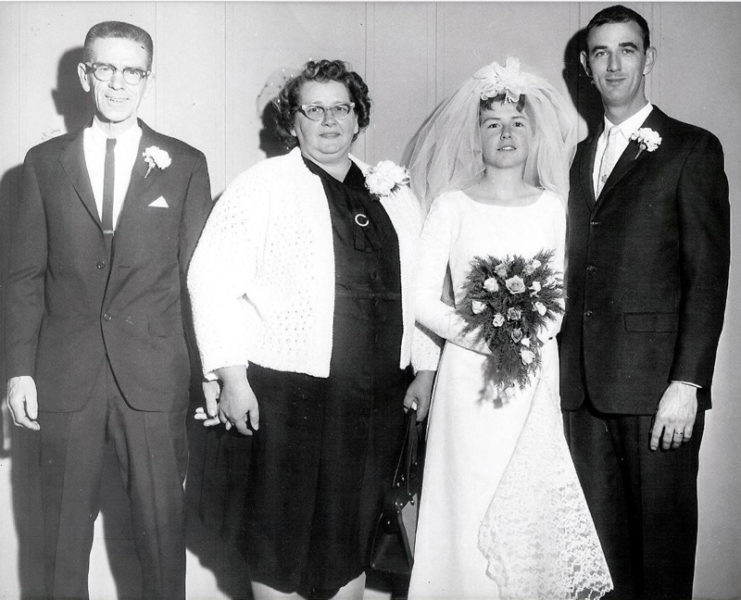 From left: Rufus and Barbara Teele, parents of the bride; and newlyweds Rita and Dana Simmons on Dec. 3, 1966. (Photo courtesy Lynn Carlson)

For her part, Rita recalled working for Travelers Insurance when she lived in Connecticut, but said that her favorite job “other than being a mom” to her now-adult son, Steve, was as a personal support specialist for Kno-Wal-Lin Home Care in Rockland.

Reflecting on the couple’s life together, Rita spoke of the arrival of Steve, their only child. “Our happiest moment was when Steve came into our lives and we were able to adopt him,” she said. Steve will marry his fiancee, Teressa, in June 2017.

“Everyone enjoyed looking back at the wedding photo album,” said Rita of the Dec. 3 event. “We received many wonderful gifts from family and friends, and the cash gifts we donated to the Bremen Union Church roof fund.”

Rita offered some words of advice for a successful marriage. “The secret to a long, happy marriage is to laugh a lot, hug a lot, respect each other, and be best friends,” she said, adding that “Dana says I taught him to hug.”

Her advice for couples planning to get married? “When you say those vows, mean what you say!”