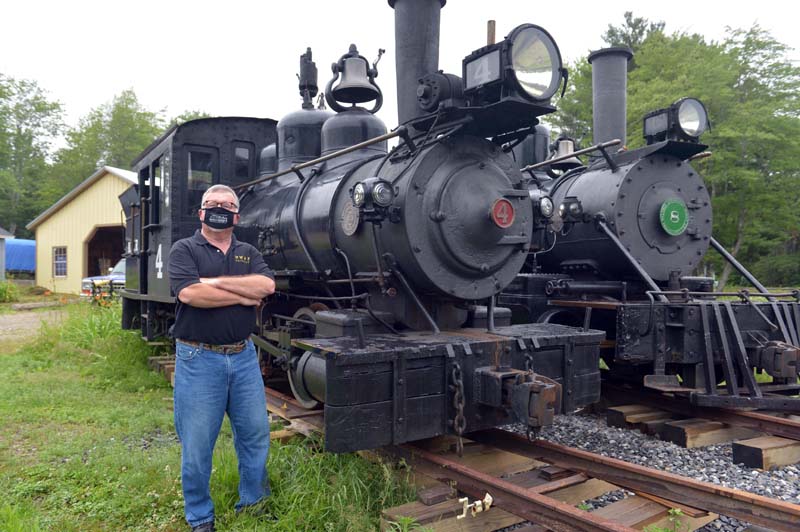 The Wiscasset, Waterville & Farmington Railway Museum in Alna is carrying out expansion efforts despite the COVID-19 pandemic, thanks to the dedicated efforts of an army of volunteers. The virus and state regulations effectively shut down regular operations in March.

“It slowed us down, but it hasn’t stopped us,” said Steve Piwowarski, marketing director and visitor interaction coordinator.

“Boy, has it had an effect. We still have to pay the mortgage and bills for lights and fuel,” museum President Dave Buczkowski said of virus restrictions. “None of the income has come in. We put out a call to our members and they responded very generously.”

Volunteers have been busy over the past year, installing a historic bridge over Trout Brook, building a 2,000-square-foot addition to their car barn, extending their narrow-gauge track (mountain extension), and erecting a pavilion at Alna Center.

When the Maine Narrow Gauge Railway Co. & Museum in Portland was forced to move its track and some of its equipment because of waterfront development, WW&F Railway Museum agreed to house much of its equipment, as well as its engines, cars, and track.

“All their equipment has been moved here that they do not use on a daily basis,” Piwowarski said. 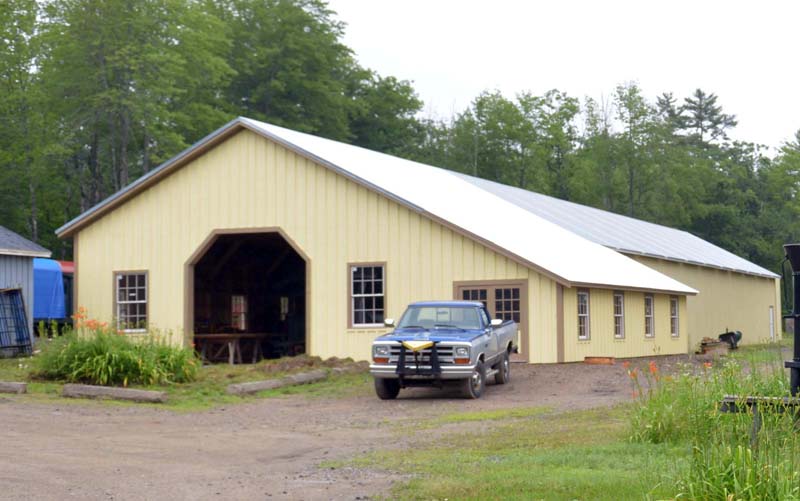 A 2,000-square-foot addition to the car barn at the Wiscasset, Waterville & Farmington Railway Museum is nearing completion thanks to a dedicated group of volunteers. (Paula Roberts photo)

When the museum started building the 2,000-square-foot addition to its car barn, it was full steam ahead – that is, until COVID-19 restrictions threatened to bring the work to a screeching halt. A small group of volunteers has worked through the pandemic and has it nearly finished.

Part of the car barn will shelter railroad cars. A shed roof off to the side will display items from the Maine Narrow Gauge Railway Co. & Museum. Among those items are dairy milk cans, similar to those used to transport milk from farms near the WW&F rail lines to Spears Creamery in Wiscasset. The narrow gauge railroad tracks were on the east side of the creamery and the standard gauge railway was on the west side. 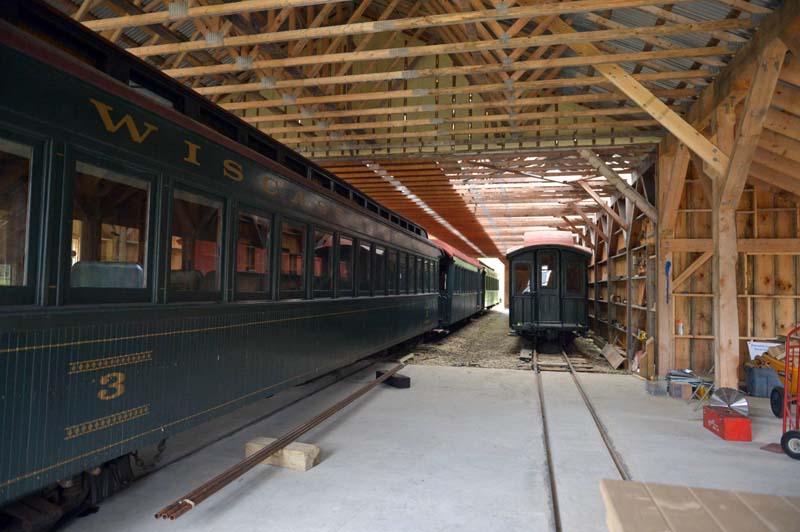 Coach car No. 3, an original car to the Wiscasset, Waterville & Farmington Railroad, sits inside the new section of the car barn at the Wiscasset, Waterville & Farmington Railway Museum in Alna. The Maine Narrow Gauge Railroad Co. & Museum owns the car, which is scheduled to be repaired at the Alna facility. (Paula Roberts photo)

Volunteers, including many from out of state, were lined up to apply ballast (crushed stone) to new track on the mountain extension to the north end of the line in April. COVID-19 restrictions scaled the group back to a dozen or so volunteers, who have shoveled four flat cars full of crushed rock around the rails every work weekend. Work was expected to be done earlier this spring, but because of restrictions, they have only reached half their goal of 24 loads to reach mile post 8 at the foot of the new bridge over Trout Brook.

The museum usually sees over 100 volunteers arrive every weekend in the summer, but is only seeing 12-20 because of the virus.

Current plans are to open the bridge in 2021. “That may or may not happen. It all depends on how many volunteers can come into the state,” Buczkowski said.

The museum’s ultimate goal is to extend the track another half-mile beyond Trout Brook to the north, crossing Route 218 and ending at Head Tide. “It is a very pretty part of the right of way,” Buczkowski said.

Other projects include building a siding at Trout Brook so there is a place to turn engines around, “so the locomotive is always at the front of the train,” Buczkowski said.

In the future, the museum wants to build a roundhouse at Sheepscot Station. 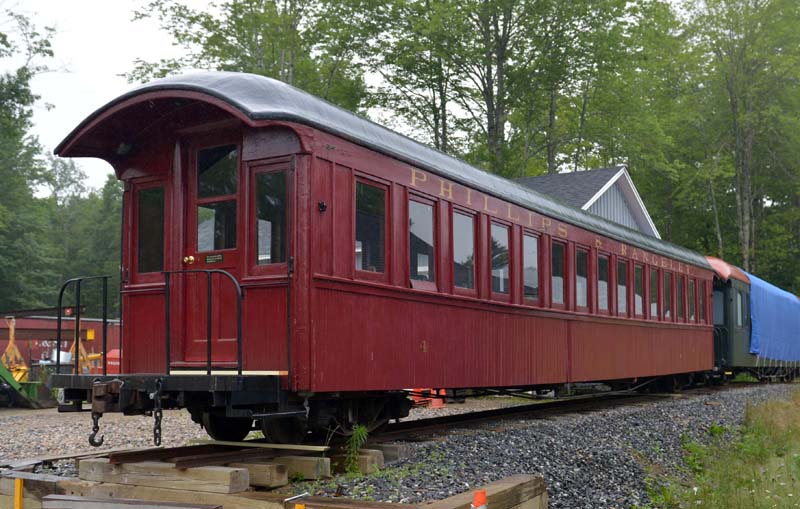 Car No. 4 is being restored at the Wiscasset, Waterville & Farmington Railway Museum in Alna. (Paula Roberts photo)

WW&F volunteers are building a replica of their original coach No. 2. After that they will restore coach No. 3, a car original to WW&F that is now owned by the Maine Narrow Gauge Railway Co. & Museum.

Preservation of railroad equipment, engines, and cars “is central to our mission,” Piwowarski said.

Volunteers recently rebuilt a tank car, which is one of only two 2-foot tank cars in existence, according to Buczkowski. The tank car was donated to WW&F Railway Museum by a volunteer.

The tank car was originally built to haul gasoline from Bridgton to Harrison, but is being used by the museum to haul water to power the museum’s steam engines at the top of the mountain, and for firefighting purposes.

The museum owns engine No. 6. Engine No. 9 and engine No. 10 are on long-term loan to the museum from a family that bought them from the WW&F Railroad.

They are building a brand-new engine, No. 11, a replica of WW&F’s original No. 7. Acquired engines are renamed in the sequence the original railroad used.

Unlike many railroad companies, the WW&F never dissolved, but lay idle for a number of years before it reopened in the 1980s. Since then the museum has been acquiring pieces of its equipment, those that have not been scrapped, and refurbishing them.

Last winter, volunteer Harold Downey made new wooden windows for coach No. 9. He also built the frame for the car and had it shipped to Maine from his home in Texas. Once the platform for the replica car is finished, volunteers will assemble the pieces. 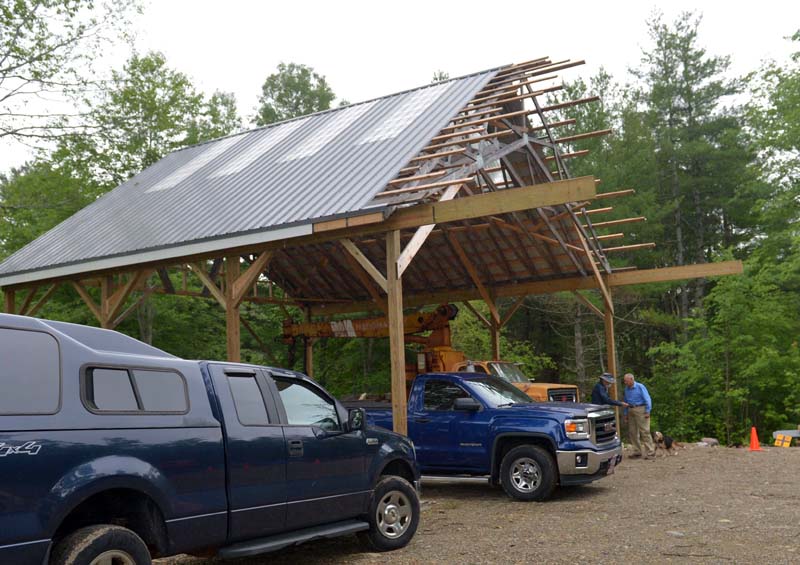 The Wiscasset, Waterville & Farmington Railway Museum’s pavilion at Alna Center is half-finished. When complete, the 40-by-80 structure will serve as a function center for concerts, ice cream socials, and weddings. (Paula Roberts photo)

Despite a full plate and a lack of volunteers, WW&F Railway Museum took on another large project, the building of a pavilion at Alna Center. Located 1 1/2 miles north of Sheepscot Station, the structure is being repurposed. It was built to shelter the schooner Mary E while it was being restored at the Maine Maritime Museum in Bath. The Maine Maritime Museum donated half of the structure and a member of both museums paid for the rest.

It was taken apart and moved to Alna, where it is being reassembled. Volunteers have raised 50% of the building.

On Friday, July 3, crews were busy on footings for the remainder of the pavilion, which will measure 40 feet by 80 feet when finished.

WW&F Railway Museum plans to host ice cream socials, farmers markets, musical events, and weddings at the facility, which overlooks a hay field. Everyone attending events at the pavilion will arrive by train. “It will be a unique experience,” Buczkowski said. 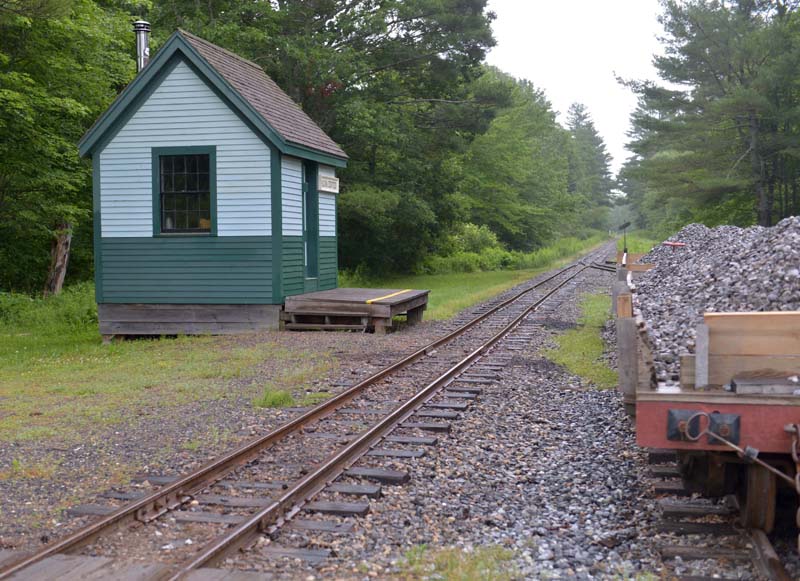 The museum expects to finish the pavilion by the end of the year and have it ready for use in 2021. Plans call for clearing an area for eight to 10 picnic tables near the pavilion.

“COVID slowed our progress down a little bit,” Piwowarski said.

On a positive note, the museum’s gift shop has seen a big increase in online sales.

“We had a nice income early on. People were cooped up and wanted to read our books,” Piwowarski said. The museum also sold face masks with a train and museum logo on them, which were quite popular.

“Our members are very dedicated, loyal, and generous,” Buczkowski said.

“It helped us stay solvent during this time,” Piwowarski added.

In 2019, the museum installed a historic Howe pony truss bridge over Trout Brook. The bridge had been badly damaged by fire in Gorham, N.H. It was restored by the National Society for the Preservation of Covered Bridges.

Unable to reinstall it at the original location, bridge engineer Wayne Duffet, a WW&F member, brought it to the attention of the WW&F Railway Museum, which applied for and received the bridge. 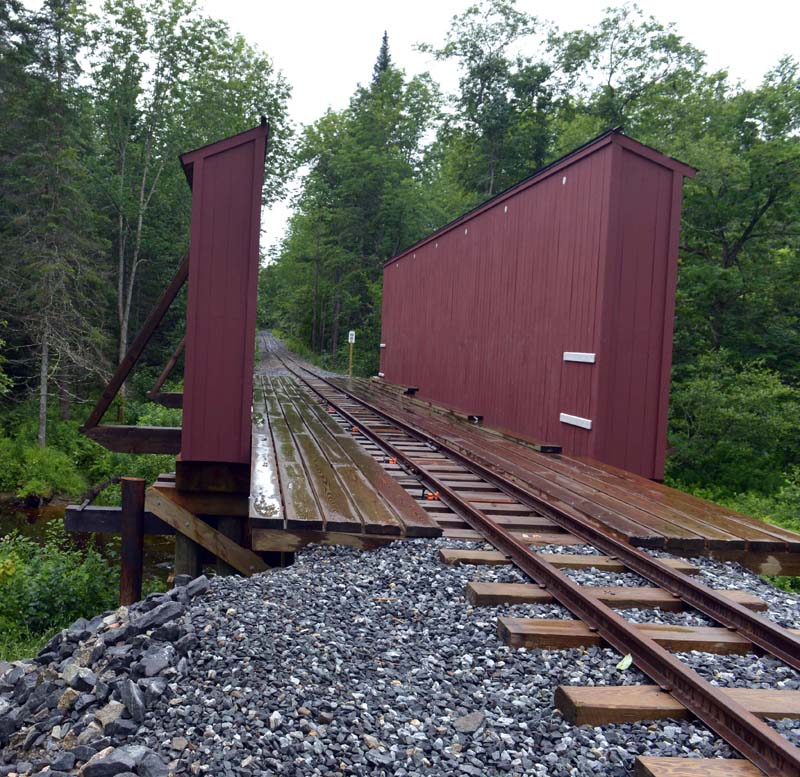 A Howe pony truss bridge over Trout Brook. Installed on the Wiscasset, Waterville & Farmington northbound line in 2019, it is one of three bridges remaining in North America that have this design. It is not a covered bridge in the true sense, as only the trusses are covered. (Paula Roberts photo)

The Howe pony truss bridge is one of three bridges left in North America of its design. It is not a traditional covered bridge, as it has no roof, but the trusses are covered.

The bridge was trucked to Alna in pieces and reassembled at Sheepscot Station. It was then trucked to Trout Brook, where it was transported over a temporary bridge built by volunteers and set in place.

WW&F Railway Museum will officially reopen Aug. 8 with COVID-19 restrictions in place. The museum will limit open-air cars to 40 passengers and require all passengers and crew to wear face masks. The train will make three or four runs a day and will be cleaned between runs. Passengers will be required to stand 6 feet apart while waiting to board.

One of the biggest changes is that all tickets will be sold online “to minimize the person-to-person contact,” Buczkowski said.

Only one person or family will be allowed in the recently remodeled gift shop at one time. The gift shop is located in the Weeks Mills replica freight house.

On Aug. 7, the museum will hold a fundraiser special, when it will make the maiden run to mile No. 8 and stop just before the new bridge. A crossing of the bridge and dedication ceremony will be held at a later date.

“The hallmark of the museum is to offer personal experiences,” Piwowarski said. In light of that, the museum will offer handcar hops up and down the rails for groups of two to four people with a volunteer. This special fundraiser will allow the group to pump the handcar up and down the main line for up to an hour on Aug. 22, Sept. 5, and Sept. 19 at 9 a.m. and 11 a.m. The cost is $125 for two to four people. Sign up in advance at wwfry.org.

Cars at the Wiscasset, Waterville & Farmington Railway Museum include a tanker car that was rebuilt by the museum. It is one of only two 2-footer tank cars in existence. (Paula Roberts photo)

“You have to pump uphill and downhill,” Buczkowski said of the challenge of running a handcar. Reservations must be made in advance.

The museum will hold an ice cream social Aug. 8 at the pavilion at Alna Center. Its spring egg hunt, which was postponed before Easter due to COVID-19 restrictions, will also be held Aug. 8.

“While closed, life gave us lemons, so we made lemonade with repairs,” Buczkoswki said of the downtime. “It was a great opportunity to catch up.”

“This is the most amazing organization I have been involved in,” Buczkowski said of the WW&F Railway Museum. “Our volunteers are amazing.”

Like many volunteers, both Piwowarski and Buczkowski were drawn to Maine by the museum and served as volunteers long before they became residents. Both purchased homes along the railway right of way.

Piwowarski, who was married on museum grounds, has volunteered at the museum for about 12 years. “This is what drew me to Maine, the enthusiasm and the sheer amount this group accomplishes,” he said.