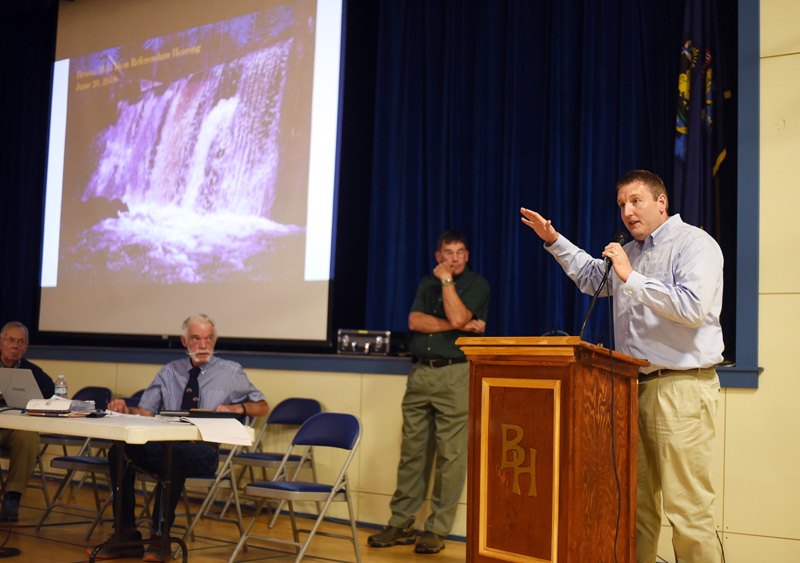 Public comments were generally in support of keeping the Bristol Mills Dam and replacing the fish ladder during a hearing at Bristol Consolidated School the evening of Wednesday, June 20.

The hearing, attended by around 75-100 people, started with Bristol Board of Selectmen Chair Chad Hanna giving a brief presentation on the dam and fish ladder.

In 2005, the fish ladder was evaluated and it was found that the ladder lacks adequate “flow entry” and “attraction flow” to serve its purpose, according to the presentation. It was decided that it would be more cost-effective to replace the fish ladder than to fix it.

The town will decide the fate of the dam with a referendum vote July 24.

The wording of the ballot, after the first article for the election of a moderator, is as follows:

Question 1: “To see if the town will vote to authorize the municipal officers to repair the Bristol Mills Dam, and construct a new fish passage sufficient to accommodate the expected maximum capacity for alewife migration in the Pemaquid River watershed.”

Question 3: “To see what sum the Town shall authorize the selectmen to transfer from surplus, to be applied to the preparatory work to implement either Article 2 or Article 3 above?”

The article and question numbers do not match because of the article to elect a moderator.

Joe McLean, of the engineering firm Wright-Pierce, was in attendance to answer questions from the crowd.

If Bristol chooses the first option, to keep the dam and replace the fish ladder, multiple factors would affect the cost, according to McLean.

Wright-Pierce’s estimate for repairing the dam and adding new gates and controls is $140,000.

The rest of the cost would be determined by what type of fish ladder is chosen.

A double denil-style fish ladder would cost $450,000-$600,000, according to Wright-Pierce. The cost for this style would depend on if it is built together or in stages.

The second option for a new fish ladder would be a pool-and-weir style.

Wright-Pierce’s estimate, for a larger pool-and-weir design, is about $850,000 plus a 20 percent contingency, according to Hall. 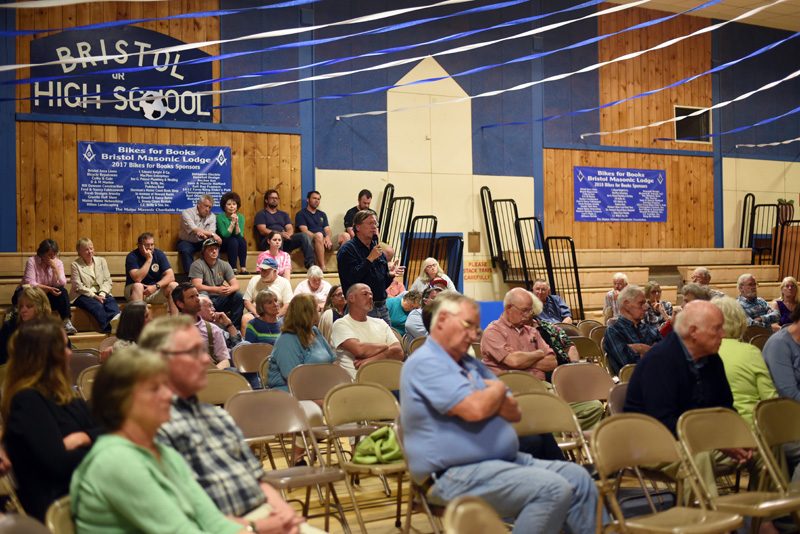 A member of the audience asks a question during a public hearing about the Bristol Mills Dam in the Bristol Consolidated School gym Wednesday, June 20. (Jessica Picard photo)

There is also the possibility of adding $20,000 for landscaping in the park.

If the town chooses the second option, which involves removing the dam, Wright-Pierce estimates the cost would be around $610,000, with the possibility for additional costs.

“We are a long way from having firm numbers,” Hall said in an interview. Once the town chooses an option, it can work toward more concrete estimates.

Hall gave a breakdown at the hearing of the funds currently available to the town for both options.

The town has also received a $200,000 conditional grant from a local family foundation for fish ladder renewal.

Bristol Fire Chief Paul Leeman Jr. spoke in favor of keeping the dam, saying it is important for fire suppression.

“The dam does need improvements to its physical structure, or the maintenance water control system, making the swimming area safer, and improving the fish passage for the alewive run,” Leeman said. “This will all cost money, however, I feel this expense makes far more sense than moving the entire operation to the Ellingwood Park area.”

If the dam is removed, the fire department would use an access road behind the park’s information center to reach a proposed dry hydrant.

“I cannot imagine there is enough room to accommodate this operation safely, especially in the winter months,” Leeman said.

Leeman said he is “not as confident” in the Ellingwood Park location for filling tankers.

“The dam is tried, tested, and found to be a very viable, unlimited source of water,” he said.

Phil Averill, who was on the fish committee in the 1980s and is a former member of the Bristol Mills Dam Advisory Committee, discussed the merits of both options.

“Everybody is afraid of change,” Averill said of the option to keep the dam. “We all have nostalgia for the dam.”

“People and kids have been sucked over that dam,” he said. “If you were going to build a town, I’m not sure you would put the swimming area at a dam.”

“It’s the absolute perfect place to have a dry hydrant for the fire department,” he said.

“We should view this as an opportunity. This is a chance to get it right,” he said. “Whichever course you choose … Build a proper fish way, or to get rid of the dam completely. It’s your choice.”

“I think we’d be giving up something quite valuable,” Bill Benner, a former member of the dam advisory committee, said of removing the dam.

“You can’t replace the dam for swimming,” another attendee said.

Others in attendance asked if upstream water levels would be greatly affected by removing the dam.

“I can guarantee the weirs can control the water levels just as much as the dam currently does,” McLean said.

However, McLean said the weirs would be man-made structures, just like the dam, and both are subject to possible failure.

The vote will take place July 24 at the town office. The polls will be open from 8 a.m. to 8 p.m. Absentee ballots will also be available.

“I can’t state enough how important this vote is to the town,” Hanna said.